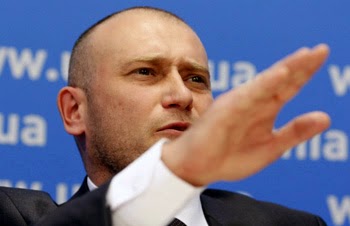 Ukraine’s Right Sector leader Dmitry Yarosh said his radical movement rejects the Minsk peace deal and that their paramilitary units in eastern Ukraine will continue “active fighting" according to their "own plans."

The notorious ultranationalist leader published a statement on his Facebook page Friday, saying that his radical Right Sector movement doesn’t recognize the peace deal, signed by the so-called 'contact group' on Thursday and agreed upon by Ukraine, France, Germany and Russia after epic 16-hour talks.

Yarosh claimed that any agreement with the eastern militia, whom he calls “terrorists,” has no legal force.

In his statement, Yarosh claimed that that the Minsk deal is contrary to Ukraine’s constitution, so Ukrainian citizens are not obliged to abide by it. Thus if the army receives orders to cease military activity and withdraw heavy weaponry from the eastern regions, the Right Sector paramilitaries, who are also fighting there “reserve the right” to continue the war, he said.

The Right Sector paramilitary organization continues to deploy its combat and reserve units, to train
and logistically support personnel, while coordinating its activities with the military command of the Ukrainian army, paramilitary units of the Defense Ministry and the Interior Ministry, he said.

The breakthrough Minsk agreement was reached on Thursday following marathon overnight negotiations between Ukraine, France, Germany and Russia, and offer hope the fighting in Eastern Ukraine may come to an end. The talks were part of a Franco-German initiative. President Francois Hollande and Chancellor Angela Merkel visited Kiev and Moscow before meeting the Russian and Ukrainian leaders at the negotiating table in Minsk.

Bluntly rejecting the German and French initiative, Yarosh said President Petro Poroshenko should have turned to the US or UK which “observe a consistent anti-Kremlin policy.”

In January, Russia’s Supreme Court banned the activities of the Right Sector within the country. In July last year the Interpol put Right Sector leader Yarosh on its wanted list.

The radical movement was formed as a coalition of nationalist and neo-Nazi organizations during the Maidan protests in Kiev at the end of 2013.

Last year, Kiev organized the National Guard force comprising former and current Ukrainian troops and volunteers from EuroMaidan “self-defense” squads. The National Guard was enabled to carry out the functions of any law enforcement agency by a decree signed by then-acting President Aleksandr Turchinov.

However Yarosh denies any of his fighters joined the National Guard. He believes his own units are better organized.

A number of volunteer pro-government battalions were also organized in Kiev – among them Aidar, Azov and Donbass. Human rights group Amnesty International reported in September that Aidar members operating in the north of the Lugansk Region “have been involved in widespread abuses, including abductions, unlawful detention, ill-treatment, theft, extortion and possible executions.”

Troops from the Ukrainian Azov and Donbass battalions were reportedly seen wearing Nazi paraphernalia such as swastikas and SS badges.

READ MORE: Crimes of Ukrainian Aidar battalion confirmed in Amnesty Int’l report - Russia
Meanwhile, in January the US military announced it would deploy soldiers to Ukraine this spring to train the country’s National Guard.

In March 2014, the extremist Right Sector decided to become a political party, nominating Yarosh for president. The same month over 1,500 nationalists from Right Sector circled the Ukrainian parliament in Kiev, threatening to storm it and capture Interior Minister Arsen Avakov.

In May 2014, Right Sector radicals reportedly descended on Odessa, where a standoff with anti-Kiev demonstrators resulted in dozens of people being shot, burned alive and even butchered with axes in the city’s Trade Unions House massacre.

Despite his notoriety, Yarosh was elected to be a member of the Ukrainian parliament (Verkhovnaya Rada) to head the Right Sector political party.

In March 2014, Yarosh appealed to Doku Umarov, Moscow's most wanted terrorist before he was reported dead, asking him “to take a chance and win over Russia.” He also later threatened to destroy Russian pipelines on Ukrainian territory calling Moscow “an enemy.”

The Russian Investigative Committee started criminal cases against several members of the radical Ukrainian groups over charges of fighting against the Russian military in the Chechen wars of the 1990s. Right Sector’s Dmitry Yarosh also faced a separate criminal case over public calls for extremist activities. Moscow charged Yarosh in absentia, demanding his arrest.

The radical movement has refused to acknowledge the authority of the Kiev government and even threatened its top figures. In September 2014, Yarosh said he could oust Poroshenko “like Yanukovich” while Right Sector radicals staged a violent rally in front of the presidential HQ in Kiev.

In January, Poroshenko’s aide told national TV that Right Sector paramilitary units had refused to come under the command of Ukraine’s Defense Ministry. Yury Biryukov said that he “personally proposed a full legal clearance scheme to Right Sector,” but they “turned down this service,” expressing a wish to remain autonomous and report to nobody.
Posted by nickglais on 2/13/2015 12:17:00 PM