The Film Battle for Russia's Past : Song of Russia 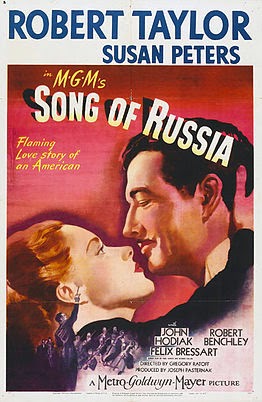 After the end of the Second World War and the outbreak of the Cold War, the House Un-American Activities Committee (HUAC) cited Song of Russia as one of the three noted examples of "pro-Soviet propaganda films" made by Hollywood, the others being Warner Brothers' Mission to Moscow and RKO's The North Star.

This assertion was supported by the Russian-born pro-capitalist and anti-Communist writer Ayn Rand, who was specifically asked by a HUAC investigator to see the film and provide an expert opinion on it.[5]

Ayn Rand, in her 1947 testimony asserted before the HUAC, the Song of Russia was an example of Communist propaganda in the Hollywood motion picture-industry, depicting an idealized Soviet Union with freedom and comfort that she asserts never existed in the real Soviet Union.[6]

Robert Taylor himself protested, after the fact, that he had had to make the film under duress, as he was under contract to MGM.

This is the rationale he used to explain why he was a friendly witness during the HUAC hearings in the 1950s.

Democracy and Struggle says Roosevelt humanising of the Soviet People was a crime for Ayn Rand in the Cold War World.

The Socialist Soviet Union has long since gone internally destroyed by revisionism from Khruschev to Gorbachev.

Democracy and Class Struggle  will be publishing Mission to Moscow and North Star other films called communist propaganda because they  humanised the Soviets in our series Battle for Russia's Past.
Posted by nickglais on 2/16/2015 06:13:00 AM