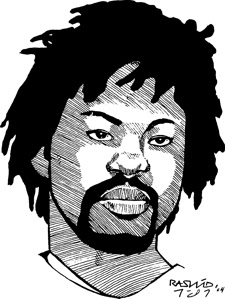 Comrade Kevin Rashid Johnson
Democracy and Class Struggle recommends you read this article with the following article MIM or MLM ? here :
http://democracyandclasstruggle.blogspot.co.uk/2015/02/kevin-rashid-johnson-mim-or-mlm.html
I want as briefly as possible to reply to a letter printed in the April 2013 issue of Turning the Tide, which claimed to argue a genuinely Marxist-Leninist-Maoist line in response to Mike Novick’s article, “On the Correct Handling of Contradictions.”

The line promoted in that letter claims only 3rd World people (of color) are genuine proletarians because the superexploitation of their labor power by the imperialist country bourgeoisie produces ‘superprofits’ which is the source of higher wages paid to Euro-Amerikan (EA) workers, and consequently EA workers produce no surplus value; therefore, they are a parasitic labor aristocracy (LA) with no revolutionary potential and are enemies of the international working class.

We submit that this vulgar LA line 1) does not by any stretch represent a MLM line, and grossly distorts what constitutes a LA; 2) is refuted by the most basic principles of Marxist political economy (PE); 3) serves the counter-revolutionary ruling class agenda of racially dividing the working class (under a false guise of making/applying class analysis); 4) serves as an excuse for not doing revolutionary work among EA workers; and 5) is a purely petty bourgeois line in its character and origin.

Marx himself noted that 3rd World colonies were the very source of the accumulation of wealth and development of capitalism in Europe, and this wealth, obtained by “undisguised looting, enslavement and murder” in the colonies, produced higher wages and full employment for Europe’s workers.  Yet he didn’t deem them a  non-proletarian, non-revolutionary class.  In fact he chose to live amongst, educate, and organize them.  Lenin likewise never characterized imperialist country workers as a LA; indeed, he organized the Comintern in Great Britain and the US.  His harshest critique of them was that under bourgeois influence they were inclined to national chauvinism as against 3rd World peoples.  But he—as did Mao—contended it to be the duty of revolutionaries to struggle to raise their consciousness above this tendency.  Neither of them cited it as an excuse not to do political work amongst them, as the proponents of the vulgar LA (VLA) line propose.

As Lenin and Mao taught, political economy (PE) is one of the three “basic constituents of Marxism.”  PE explains the basics of value, surplus value, surplus labor, differences in wages in different countries, etc.  Under basic PE we know the core of capitalist relations is the commodity, which is anything produced by humyn labor that serves a humyn need or want and is bought or sold.  The VALUE of commodities is determined by the amount of labor required to produce them.  The capitalist boss does not pay the worker the actual value of the commodity her labor produces, but as low a wage as the boss can hope to get away with, which is but a fraction of the commodity’s actual value.  That value for which the worker is not paid is the SURPLUS VALUE.  The boss, however, sells the commodities at their actual value, which is the source of his profits.

Now apply these elementary principles of PE to, say, a McDonald’s worker who is paid the $7.25 hourly minimum wage ($58 per 8 hour workday).  However, her labor produces, say, $500 in food sales per day.  That’s $442 in surplus value (profits) pocketed by the boss.  So US workers obviously produce surplus value.  In fact, the US fast food industry reaps $200 billion in annual profits.  That’s a lot of surplus value falling from the sky!

The proletariat simply is one who must sell her labor power to survive, which is as true for the Amerikan worker as it is for one in Haiti.

Then, completely independent of the value of commodities produced by labor, is the fact that LABOR POWER is itself an object of exploitation by the capitalist boss and produces surplus value.  This because labor power is itself a commodity that has its own value, which the VLA line ignores.  The value of labor is, like other commodities, determined by the amount of labor required to produce it.  This, as Marx observed, is determined by 1) the cost of providing for the worker’s and her family’s basic survival needs and education, and 2) the standard of living that prevails in the worker’s particular country and era.  This, he emphasized, makes the value of labor different in different countries, regions, and eras, with the result that there never has been nor can be an equality of wages; and there will always be lower versus higher wages in underdeveloped versus advanced capitalist countries.  This is an inherent feature of the capitalist system.

Marx himself stated those who presume there could be an “equality of wages” under capitalism, harbor “an insane wish never to be fulfilled,” and those who base political lines on such a notion reflect “that false and superficial radicalism that accepts premises and tries to evade conclusions.”  Which is a true characterization in every sense of the VLA proponents.  So, because the cost and standard of living and thus wages are much higher in the US than, say, Nicaragua, does not—according to Marx himself—make the US worker any less a proletarian than the Nicaraguan worker.

Furthermore, Marx noted that a worker could be paid a wage that meets (or even exceeds) her cost and standard of living, and still be exploited by expropriation of surplus labor and surplus value by the boss.  This can be done by making the worker labor for hours above and beyond those necessary to produce a ‘living wage’ (SURPLUS LABOR) which produces value that she is not paid for (SURPLUS VALUE).

So it is blatantly false that the EA worker does not produce surplus value and is thus not a proletarian.
Also, contrary to the VLA line, Lenin himself recognized the actual LA to be members of the proletariat, just amongst its “upper strata.” He also obviously did not base this classification simply on wage levels either.

If one but read Lenin, he classifies the actual LA as leading elements within the working class movement, unions, and workers’ parties who opportunistically betray their own workers’ cause and class interests.  He also characterizes the upper stratum of the proletariat as the vanguard because their higher living standard and better work conditions afford them means of achieving greater political awareness and organizing experience, through which to become either genuine working class leaders or sellouts.  So, what makes the LA is they are class-conscious elements who knowingly mislead or sell out the proletarian cause.  This is why and how Lenin consistently identifies them as sitting at the head of and subverting workers’ unions, movements, and parties.

The typical EA worker is not class conscious nor even an active part of any workers’ organization or movement.  In fact, most have no clue that much of Amerika’s wealth comes from 3rd World resources any more than did British workers during Marx’s or Lenin’s day.

Lenin also noted the tendency of the LA to refuse to “conduct genuinely proletarian revolutionary work of propaganda, agitation, and organization” amongst workers just like the proponents of the VLA line.  Also, Lenin didn’t reject the entire LA as counter-revolutionary, but only its upper layers, and he even held they could be revolutionary allies and leaders, but “should be tested for their loyalty” to the workers’ cause.  Besides, he banked the success of world socialism, and even in Russia and the underdeveloped countries, on the workers of the advanced capitalist countries—he clearly did not dismiss imperialist country workers as a collective LA nor as ‘enemies of the international working class.’

Neither did Mao.  He in fact specifically promoted the EA workers as a potentially revolutionary class, who under the leadership of New Afrikan/Black revolt would overthrow the imperialist system, which he observed was the only path to genuine freedom for New Afrikans/Blacks:

So clearly on no level does the VLA line comport with any M-L-M line.

What it does, however, is perpetuate the racial division within the workers’ ranks that was first manufactured in the 17th century by the ruling class, and, as early New Afrikan socialists like Hubert Harrison recognized, has served as the key deterrent to socialist revolution in Amerika.  Only thing is, the VLA line uses class categories (“LA” versus “3rd World proletariat”) as a cover for racially dividing proletarian ranks, simply substituting “LA” for ‘white’ and “international working class” for ‘people of color.’

Indeed, many of the VLA proponents outrightly equate the LA with ‘whites.’  And no one can deny that the formulators of the VLA line are themselves petty bourgeoisie.  Matter-of-fact, I have their admissions in writing.

The VLA line incites workers of color and revolutionaries not to unite with EA workers and not to do revolutionary work among them, which is the exact sort of ‘betrayals’ the true LA commits while proclaiming itself to be genuine revolutionary leaders.  Then these elements and their followers denounce as pigs those who expose and oppose their revisionist line, which is itself a reactionary pig tactic.  Namely using smear tactics, rudeness, persecution, and humiliation to silence, discourage, or discredit those who disagree with or expose one’s line as bogus.

Yet the VLA proponents recognize New Afrikan prisoners as ‘lumpen’ who are potentially revolutionary.  Which begs the question, why aren’t they doing work within the oppressed New Afrikan communities where they’re less apt to be censored, if indeed they compose a lumpen sector?  And if the lumpen can be redeemed, why not EA workers?  Refusing to do political work among them is to leave them to be used (as Fanon warned about the lumpen) by the bourgeoisie against the revolutionary movement.  Even the imperialists recognize and express the real danger of Maoists is that we perceive everyone to be potential allies excepting only the imperialists, who are our only permanent enemy.  We thus work to turn their own allies against them.

The New Afrikan Black Panther Party—Prison Chapter and our allies are working to develop revolutionary proletarian consciousness and leadership amongst all oppressed peoples, including EA workers, poor, and imprisoned and unite them into a united front to smash the imperialist system.  To “unite all who can be united” to this end is the true M-L-M line.

And we unite with the comrades of Inter-Communal Solidarity Committee to this end.

Dare to Struggle, Dare to Win!

All Power to the People!
SOURCE: http://rashidmod.com/?p=879