Ukraine: Poroshenko and Kolomoisky come and go, but the Ukrainian people remain! By Victor Shapinov 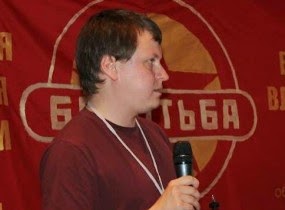 At the end of 2012, immediately after the parliamentary elections, the Union Borotba (Struggle) held a large anti-fascist rally in the center of Kiev. Yes -- then, under the "dictatorship of Yanukovych," such actions were possible. About 500 Borotbists marched from the Arsenal metro station to Parliament to protest the parliamentary faction of the ultra-right Svoboda (Freedom) party.

Even then, we knew that the right turn of Ukrainian politics was no accident. The oligarchy relies on the ultra-nationalists as a force to silence those who are unhappy in an emerging crisis.

For this march, Borotba released a special issue. The main article was headlined, "Ukrainian oligarchy prepares a creeping fascist coup." Here is an extensive quote from the article:

"The country is on the verge of a new wave of crisis. The state has no money. Through democratic procedures, it is impossible to push through neoliberal reforms and introduce a regime of austerity, which the West demands from the Ukrainian authorities. Cuts in social spending of government and business -- that's the only way that is seen by neoliberal economists, and this requires dictatorial powers for the country's leadership, restrictions on freedom of speech, assembly and trade union rights.

“Financial and industrial tycoons do not want to spend money on expensive democratic processes and decided to bet on the extreme nationalists.

“To implement social reforms in favor of paying for their banquet, the oligarchs will dramatically reduce democratic rights and freedoms.

Opposition media will be closed, parties and public organizations that have not passed the test of 'Ukrainianism' will be outlawed, and will not be allowed to participate in elections.

If this is not enough, the elections will be canceled indefinitely, and a national vetting will be held.

“In the name of the 'great goals' of national revival, citizens will be asked to tighten their belts ... As a result of these measures, Ukraine will be isolated, and the new leadership will be forced to make unprecedented concessions in foreign policy.

For all the nationalist rhetoric, the country would be in deep dependence on foreign money -- as has already happened with Georgia, and more than once in the recent history of those that relied on nationalism."

These words were written a year before the Maidan and six months before the mass opposition actions of "Arise Ukraine!"  In political forecasting, Baba Vanga and Nostradamus were beat by our Marxist “optics” – which, 130 years since the death of its creator, still give the same exact analysis and forecast.

Sometimes it is useful to recall facts, such as this prediction didn’t come from the largest left-wing party. True, then our voice was not heard. But we do not believe that history teaches only that it teaches nothing.

The masses learn on their own, sometimes, through tragic experience.

And we are convinced that the day will come when those shouting "Glory to Ukraine" on the streets of Kiev will face a beating and people will not go for a homegrown Nazi Fuhrer, but for those who understand what is happening and how to change the situation in favor of the working people, not the oligarchs.

They are taught by the cops and SBU, dispersing rallies of soldiers' mothers and jailing people for posts on social networks. Kolomoisky teaches them about surreptitiously appropriating that which has not yet been privatized.

We love Ukraine and Ukrainians.

Not only those in the South-East or Novorossia, but also the rest of Ukraine.

We believe in the Ukrainians.

Sooner or later the veil will fall from the eyes and people will see that the real culprits of their troubles are not Putin, "separatists" and "saboteurs," but the parasitic oligarchy and its chained dogs – the nationalists.

Today we also say: Poroshenko and Kolomoisky, Yarosh and Tyanybok come and go, but the Ukrainian people remain.