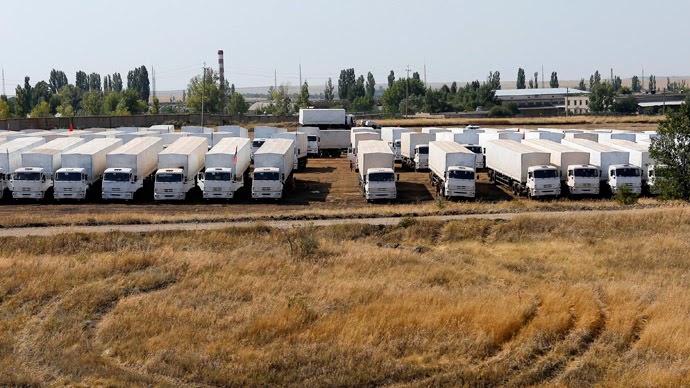 "In accordance with Articles 4 and 5 of the Law of Ukraine 'On Humanitarian Aid' considering the initiative of the President of Ukraine Petro Poroshenko on receiving humanitarian aid within the framework of international humanitarian missions under the auspices of the International Committee of the Red Cross (ICRC) to recognize the cargo as humanitarian aid,” the document reads.
The Russian aid shipment consists of 12 types of goods weighting 1856.3 tons according to an official letter from the Red Cross received by the Ukrainian ministry on Saturday, which complies with the cargo declared by Russia.
Kiev granted Russian cargo humanitarian aid status after the Red Cross sent a petition to Kiev to allow the Russian humanitarian aid to enter eastern Ukraine, after the Russian cargo was held at the Ukrainian border since August 14.
Russia sent 280 trucks with medical supplies, food, including baby food, sleeping bags and other basic necessities to southeastern Ukraine on Tuesday.

But the cargo still has not reached the residents of the regions badly hit by the conflict as the Kiev government has procrastinated in designating Russian aid as humanitarian cargo.
Posted by nickglais on 8/16/2014 02:50:00 PM