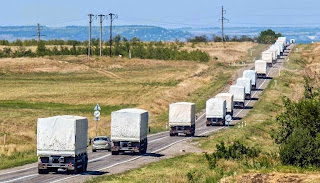 In the words of the International Committee of the Red Cross (Red Cross), the situation in Luhansk and other rebel-held areas is "critical - thousands of people are reported to be without access to water, electricity and medical aid"

An ICRC spokesperson in Moscow said it had concluded that it had not "received the necessary security guarantees from the fighting parties to allow us to escort the convoy at this time".

Russia’s Foreign Ministry has confirmed humanitarian aid has been delivered to the besieged city of Lugansk in eastern Ukraine. Meanwhile all trucks that delivered aid had returned to Russia.
“We express our satisfaction that the Russian humanitarian aid for those in need in southeastern Ukraine has been delivered as intended. We were motivated only by the goal of helping civilian citizens in need,”the statement read.
All trucks have returned empty, Ukrainian and Russian border guards confirmed, Russian Deputy Emergency Minister Eduard Chizhikov said.
“There were 227 trucks in the humanitarian operation participating in the operation, and they have all returned. All those vehicles have been searched by the representatives of the customs and border control, both on the Ukrainian and Russian side. No issues have been pointed out. All vehicles were empty upon returning, and the media representatives checked that, too, while they were filming the search,” Chizhikov stated.
The Organisation for Security and Cooperation in Europe (OSCE) also confirmed that all 227 vehicles that entered Ukraine as part of a Russian aid convoy have now returned home.
The Russian Foreign Ministry also said that they were “getting a lot of feedback from the residents of Lugansk, who were thankful for such a good attitude from the Russian part.”
It also underlined that the Russian representatives of the Red Cross were in close cooperation with the leadership and employees of the International Committee of Red Cross (ICRC), and the ICRC has proved to be “a responsible partner.”
Posted by nickglais on 8/22/2014 02:18:00 AM