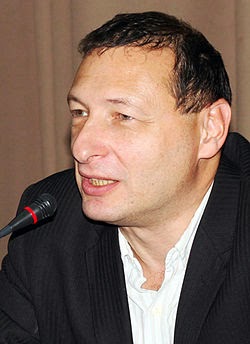 Democracy and Class Struggle publishes this analysis of the situation in the Eastern Ukraine from Boris Kargarlitsky for information.

"The Russian press is already reporting openly on an agreement reached between the Moscow bureaucrats and the Ukrainian oligarch Rinat Akhmetov ".

This is extremely concerning.

PS: We can now verify the worrying fact that Akhmetov is back on the scene from our sources.

August 16, 2014 – -- The war between the Ukraine government and the republics of Novorossiya [New Russia] is gradually taking on the character of a positional stand-off. The resources of both sides are exhausted, and fighting reserves are at an end. For the people’s republics, defending themselves against the many times larger military forces of the Kiev regime, the well-known principle of “a government needs to win, but for an insurrection it is enough not to lose” operates with full force.
The deteriorating economic situation in Ukraine, the growing demoralisation of supporters of the Kiev regime and the gradual development of a partisan movement on government-controlled territory together herald a new phase in a civil war that will clearly extend far beyond the boundaries of the south-east.
The middle of August marked the failure of the latest offensive by the government’s army (most likely, the last offensive in Kiev’s summer campaign). It is significant that during the previous offensive the main Western mass media, while assiduously denying their readers any real information about the war, suddenly began running reports of successes by the government’s army. Just as occurred last time, the optimistic forecasts have been followed by silence. The failure of the second offensive followed exactly the same scenario as that of the first: the attacking forces were cut off from their bases, and finished up surrounded. The virtual victories turned into a real catastrophe. A war cannot be won in the information space if you are getting beaten on land.
There might seem to be every reason to speak of positive prospects for the people’s republics of Novorossiya. But against the background of military victories a political and administrative crisis is unfolding, creating new dangers which, if they are not more perilous than those associated with the attacks by government forces, are no less serious either.
Over several weeks the entire leadership of the Donetsk and Lugansk republics has effectively been replaced. The most momentous, and unexpected, development has been the ousting of the military leader of the militias, Igor Strelkov. In the best Soviet traditions, the announcement was couched in terms of his “transfer to other work”. The decision was made at a time when Strelkov was in Moscow, far from his troops.
Strelkov’s removal from his post is an obvious act of revenge on the part of those very Kremlin forces on whom the leader of the militias had inflicted a serious political defeat in early July. Militia units, after conducting a heroic two-month defence of Slavyansk, had broken through encircling Ukrainian forces and made their way to Donetsk, where political figures linked to the Kremlin were already planning to surrender the city to the Kiev government. The arrival of the militias was accompanied by a radical purge in the structures of power. No one repressed the conspirators, but all were forced one after another to sign letters of resignation. They then left the city without excessive fuss, some of them setting off for Moscow and others for Kiev.

This occurred against a background of growing political radicalisation within the movement. In August, a joint letter had been published by rank-and-file militia fighters demanding that the slogan of “social republics” that had been proclaimed in Donetsk and Lugansk should be put into effect, that the property of oligarchs should be nationalised and that reforms should be enacted in the interests of workers. The post of chair of the Supreme Soviet was taken by Boris Litvinov, a communist who had broken with the official leadership of the party. A law was adopted reversing the commercialisation of health care that had been initiated by the previous leaders, and recurrent, though somewhat timid, attempts were made at nationalisation.
For their part, political specialists close to the Kremlin unleashed a campaign against Strelkov in the Russian mass media. The bitterness of the Moscow bureaucrats and their propaganda assistants is understandable: while they were sitting in their cosy offices, drawing up plans and weaving intrigues, the people at the forefront of events were making history without asking their advice.
Paradoxically, it was Strelkov who did most to aid the radicalisation of the process, despite his sympathies for the pre-revolutionary monarchy and nostalgia for the Russian empire. The leader of the militias was not only famed for his honesty and openness (it is enough to recall his detailed accounts of his own difficulties and failures, accounts which contrast sharply with the propaganda from Moscow and Kiev). Strelkov’s political instincts drove him, to a large degree despite his own ideological leanings, to support social and political changes. He and his associates stressed repeatedly that they would not allow Novorossiya to be transformed into a second edition of pre-Maidan Ukraine, directly contradicting the strategy of the Kremlin, which sought precisely that.
Unlike other Donetsk and Lugansk leaders, who travelled constantly to Moscow to beg for assistance (for the most part in vain), the commander of the militias was to be found with his troops in the line of battle. There, as practice showed, it was safer for him politically than in the Moscow corridors of power.
How Strelkov was lured to Moscow, and what was done to him there in order to extract from him his “voluntary” resignation (if in fact he signed such a statement at all), we can only guess. He may have been threatened with a complete halt to Russian supplies to the liberated territories of Novorossiya. To a substantial degree, this dependency of the people’s republics on outside supplies is a result of inept management by the people whom Strelkov removed from their posts in July and early August – they were unable, or refused, to organise the economy in the rear, and to ensure the normal distribution of resources. By August a situation had arisen in which the republics were threatened with disaster unless shipments of food and ammunition were brought from Russia. More than likely, it was this lever that was used by the Kremlin intriguers to get rid of Strelkov.
One way or another, the conservative forces took their revenge, and the Donetsk military leader was removed. People suspected of links to the oligarchs were appointed to a series of key posts. In Moscow during these very days the Ukrainian politician Oleg Tsarev, representing no one and driven out of Donetsk by the militia fighters, unfurled a “new flag of Novorossiya”. For some reason this was an upside-down version of the old imperial banner, and was obviously meant as a counterbalance to the flag, dark red with a cross of St Andrew, under which the militia are fighting.
The Russian press is already reporting openly on an agreement reached between the Moscow bureaucrats and the Ukrainian oligarch Rinat Akhmetov. In the best traditions of the ancien régime, the Kremlin bureaucracy has decided to sacrifice the liberated territories to its new vassal, in exchange for his services as a mediator in its relations with Kiev and prospectively, the West. At the same time, contacts are being revived between Russian and Ukrainian diplomats, and lively discussions are under way on the ultimate fate of the south-east. After the failure of its latest offensive, and faced with growing internal difficulties, Kiev might well be ready to strike a deal.
The only thing the authors of this scenario have not taken into account is the thinking of the people of Novorossiya and Ukraine, along with the moods of Donetsk residents and the overall logic of a revolutionary process into which Russian society too is gradually being drawn. The militia fighters and activists who, beneath the bombs, are constructing a new state are no longer prepared to be docile agents of outside decision making, no matter where, in Moscow or Kiev, the decisions alien to their interests are being taken. In Novorossiya, the idealistic sympathies with an abstract Russia that characterised the first months of the uprising are now being replaced by a growing hatred for the Kremlin bureaucrats, whom supporters of the republics accuse of sabotage and treason. The same moods are growing, in the fashion of an avalanche, within Russia itself. As for Igor Strelkov, a new group of field commanders is taking his place, in many ways accepting him as an example but differing from him in their far more radical and left-wing views.
Through apparatus intrigues, blackmail and manipulation, it may be possible to achieve tactical successes, and to banish one or another figure from the leadership. But it will not be possible to stop the revolutionary crisis whose development is now gathering strength.

Very good article. I suspect something is happening in covert nagotiations. I hope I am wrong, and this article is wrong too, but I fear it might be so.

The only plan on offer in these covert negotiations is the so called German Plan which got knocked off course following MH17 event and should form the basis for discussion in Minsk on 26th August.

I am informed this plan will not fly - we will find out on 26th August.