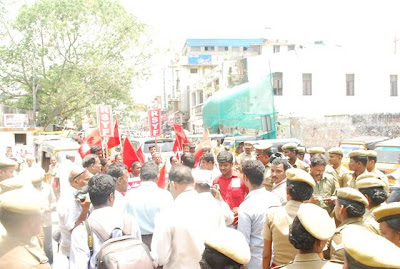 Tamil Nadu state government has been treating displaced Sri Lankan refugees as criminals for decades.  In order to keep the Sri Lankan Tamil refugees under the police control , the state government put in place a special state authority named Q Branch.
The second generation of refugees live in the camps don’t have basic human rights;  children grew up in the  camps are not allowed to access the higher education.
They  can only work as labourers.They don’t have the rights to move to the other places and settle. Most of the middle class families moved to Tamil Nadu escaping from Sri Lankan governments on going ethnic cleansing live in the closed camps under the poverty line with out even having access to clean water and food.
The opportunist politicians in Tamil Nadu give the fake hope to the public saying that they will raise their voice against Sri Lankan government, don’t even care the Sri Lankan refuges treated as slaves in their own territory.
In  this situation People's movements in Tamil Nadu protested on 30.04.2012 against the Tamil Nadu state government demanding to release all the eighty thousand Sri Lankan Tamil refugees kept in the camps for several decades.
Revolutionary Student Front,  New Democracy Workers Front, Women Liberation Front and people’s literary and art organisation are the mass movements  participated in the protest.
Amid, a Sri Lankan Tamil Refugee in Sengalpattu refugee camp tried to commit suicide motivated the protesters more than the other times.
They also urged the Tamil Nadu government to arrest the Q Branch police force officials  who induced the suicide of the above refugee.
Posted by nickglais on 5/01/2013 06:54:00 AM