May 4th Public Meeting at New Delhi - No more a war on adivasis alone...It is now an all out war on all the oppressed people of the sub-continent! 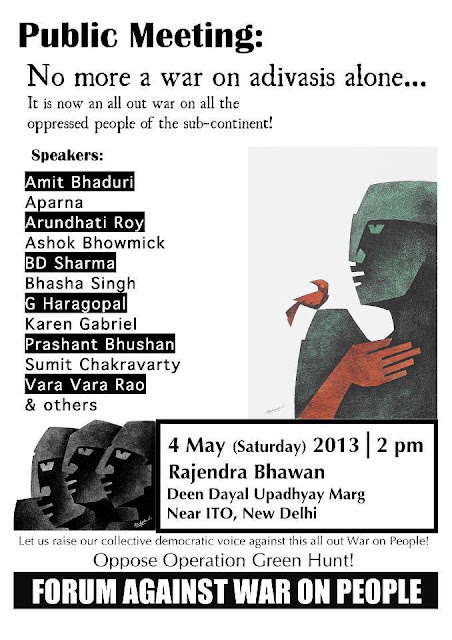 Since 2009 the ground level reports show that lakhs of adivasi people have been pushed out of their natural habitats in the name of fighting ‘Left Wing Extremism’, a pet word for Prime Minister Manmohan Singh, to hide his pro-imperialist outright servile model of development that can only bring further miseries to the masses of the people.

Thousands of adivasis have been killed, maimed, raped, and brutally wounded, injured. Many of their homes in hundreds have been razed by security forces—who talk, right from the foot soldier to his officer, only about ‘development’ in these areas—setting them on fire.

All characteristics of a genocidal war are evidently showing up in these 3 years that have gone by.

Yet no statistics, no Government Commissions, no proof of the War at all!

The sullying silence from various arms of the state is the only answer to democratic voices that have marked their protest.

The adivasis since 1947 have been an expendable people for the various governments and its pro-imperialist model of development. The war on them in the name of their ‘development’ as well, by successive governments, continues till date unabated.

While a pampered new middle class is being wooed to the tilt to hide the ugly face of this so-called largest democracy in the world the Adivasi still remain the subject, as were in the colonial days, to be ‘redeemed’ and ‘civilized’ !

As the policies of Liberalisation, Privatisation and Globalisation takes its violent toll on the various sections of the masses of the people, every avenue of livelihood, of production and reproduction of the material world has been transformed into a war zone, as is being waged on the workers in cities and their factories, slums all over the subcontinent further aggravated by the worst ever economic recession since the Great Depression. Maruti Suzuki workers at Manesar, Haryana are at the forefront like the adivasis in their resistance against such dog-eat-dog exploitation and plunder.

Left with little option to survive workers of Yanam in Andhra Pradesh, UP and elsewhere in the subcontinent are increasingly militating against the crisis-ridden system that has nothing to offer as meaningful solutions to the deepening problems of the workers in terms better employment, working conditions and pay.

Farmers and other cultivators are also raising their banner of revolt against acquisition of their land for different projects as well as extremely detrimental policies that can starve the agrarian sector without any future of promised sustainability in production and distribution. The resistance is brewing against the all pervasive war of India’s corrupt rulers among all sections of suppressed and oppressed people of the subcontinent.

It has been more than three years since the Indian state launched a massive military campaign in August-September 2009 against the people of central and eastern India, which was euphemistically codenamed ‘Operation Green Hunt’.

This hunting campaign by the rulers of the country – against the oppressed and fighting people of the country in general and the adivasis in particular – have left a bloody trail of mass murders, ‘encounter’ killings, and ‘disappearances’.

Thousands of people are put behind bars; custodial torture is the face of increasing impunity of India’s security forces;  rape and other forms of sexual violence is being resorted to against women; arson, plunder, destruction of people’s property every aspect of the violent beast is being institutionalised and legalised through policies teethed with draconian laws.

The initial fanfare and media-glitz with which Operation Green Hunt was launched soon evaporated due to the stiff resistance put up by the people directly on the line of fire.

The vocal and steadfast protests by the conscientious citizens and people’s organisations inside and outside the country too have put the Indian state on the back-foot. As a result, there is a strong public opinion and resentment against Indian state’s war on the people of the subcontinent.

This is an achievement of the various forms of resistances that have refused to die down in the face of desperate and brutal repression of the State. Forum against War on People which derives its spirit from the innumerable resistances of the masses of the people too has played its role from its inception in November - December 2009.

The war on the people, however, still continues. On the face of stiff resistance, the state has merely changed its tactics in scaling up its fascist war of attrition. In the second phase of Operation Green Hunt, the doctrine of ‘Low Intensity Warfare’ perfected by the US imperialist army against the heroic people of Vietnam and later used against several peoples of the world for dreaming a world free of imperialist oppression and exploitation has now been deployed by the Indian state. In the name of ‘carpet security’ thousands of additional central paramilitary troops are being raised, trained and stationed in the ‘war zone’.

The Indian Army has already established its base over a six hundred square kilometre area in Narayanpur district of Chhattisgarh, ready to begin its assault on the people of the region. The Indian Air Force too is being introduced in a combat role – not only transporting troops and supplying logistics – but arming its aircrafts with machine guns and commandos.

This is in addition to the high-tech surveillance system including UAVs and drones imported from the US and Israel, which has been put in place to monitor the mineral-rich regions of central and eastern India after dividing them into ‘security grids’. The war mongering, jingoist media plays second fiddle to this grant design often glorifying/mystifying the unprecedented and unmitigated violence on the people.


This intensified but carefully-calibrated phase of the war on people is being guided by the central Home Ministry through the Unified Command system in coordination with the state governments. Irrespective of the party in power –be it the Congress, BJP, BJD, JD (U) or SP – all the ruling class parties have joined hands against the people to unceasingly unleash Operation Green Hunt and such synonymised interventions such as Operation Hakka, Operation Octopus, Operation Vijay, Operation Thunderbolt etc.

The memory of the most brutal episode of this extermination campaign – the Bijapur massacre of June 2012 – is still fresh in our memory.

With the deepening of the worldwide crisis of the imperialist economy and its fault lines getting clearer in the Indian subcontinent, the desperate rulers of India are resorting to more brutal fascist methods against the oppressed people of the country, in their last gasp attempt to attract decadent capital abundantly into the local markets in order to facilitate unbridled corporate plunder of people’s resources.

War and the various euphemisms to justify the bloody war is nothing but a cold and calculated yet desperate manoeuvre of the Indian rulers as an integral part of the strategy of the imperialists to tide over this crisis. The stage, therefore, is set for a renewed attack on the vast masses of people, their lives, livelihood, and democratic rights.


Let us raise our collective democratic voice against this all out War on the People!