Speech of Varinder Singh of the Sikhs Against the EDL 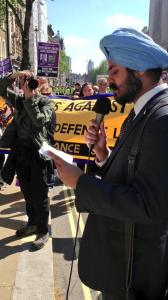 Varinder Singh of the ‘Sikhs Against the EDL’ campaign steering committee.


Friends,
I would like to start by sending my condolences to the family of Lee Rigby, the British soldier who was victim to a barbaric attack in the streets of Woolwich. The actions of the two individuals involved are not only barbaric but the worst examples of human behaviour.
I am never happy to be at these rallies because they are always in the shadow of tragic events. The past week has seen numerous attacks on places on worship, on innocent individuals and an appalling level of racism.
I am proud to be here with you today to reaffirm our dedication to building a peaceful society in which all are accepted and multiculturalism is celebrated.
But we should never take a state of peace for granted. Dedication, effort and hard work is needed to maintain this peaceful environment. If there is one thing that we have learned from history, it is that appeasement of racism and fascism in all of its many forms heads in one direction – the direction of gross violence, intolerance and murder.
For a community that was victim after the September 11th attacks and more recently was victim in the Wisconsin Gurdwara Shootings, to not speak up against hatred would be outrageous. And so today, we say openly say no to all forms of hatred.We hope that this society never sees the horrors of hatred, and it shall not as long as people like you are there to challenge fascism in all its forms at every step.
I would like to close by echoing the words of an ordinary member of the Sikh community: “I will not distinguish myself from a Muslim, because I won’t abandon any one person as a target in the face of racist attitudes. We are one.”
Once again, I commend you for coming out today. Let there be no illusion, that your presence, and your contribution has been one milestone in defeating the far-right.
Thank you.