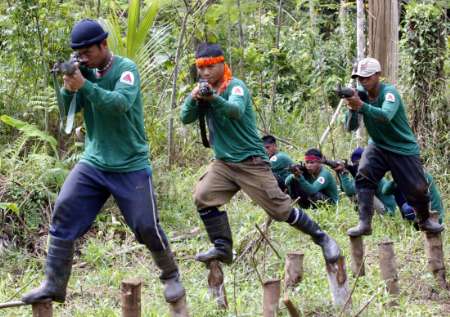 A landmine exploded in Barangay Cataratan in Allacapan town at around 8:30 a.m. while the policemen, on board a truck, were passing, according to Director Rodrigo De Gracia, Cagayan Valley (Region 2) police chief.

"The wounded were able to return fire and they managed to retreat. Some of our reinforcements picked them up later," he told AFP.

Seven other policemen were injured.

De Gracia said the policemen were on their way to a medical exam in Allapan when the ambush occurred.

He said the rebels belong to the NPA's Danilo Bien Command.

The rebels escaped with 11 rifles and seven handguns from the casualties, Orlanes said.

The victims were all members of the PNP-SAF, an elite police unit trained in counter-insurgency tactics that is typically involved in security operations against communist rebels.

The ambush happened after 7 Marines died in an encounter with some 50 Abu Sayyaf terrorists in Jolo, Sulu on Saturday.