Tamerlan Tsarnaev : Sometimes it makes no sense at all.' 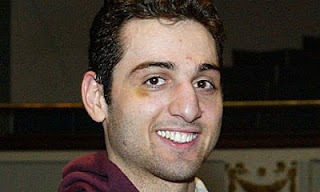 A Homeland Security official confirmed Tuesday evening on the condition of anonymity that the 2012 Saudi Arabian letter exists warning US about Tamerlan Tsarnaev, saying he had heard of the Saudi communication before MailOnline inquired about it.

An aide to a Republican member of the House Homeland Security Committee speculated Tuesday about why the Obama administration contradicted the knowledgeable Saudi official.

‘It is possible the Department of Homeland Security received the information from the Saudi government but never passed it on to the White House,’ the GOP staffer said. 'Communication between DHS and the White House's national security apparatus isn't always what it should be.’

'I can easily see it happening where one hand didn't know what the other was doing because of a turf war.'

'Just like the different agencies in the Boston JTTF [Joint Terrorism Task Force] want credit for breaking the Tsarnaev case,' the aide added, 'they sometimes jealously guard the very intel they should be sharing the most freely.

Sometimes it makes no sense at all.'