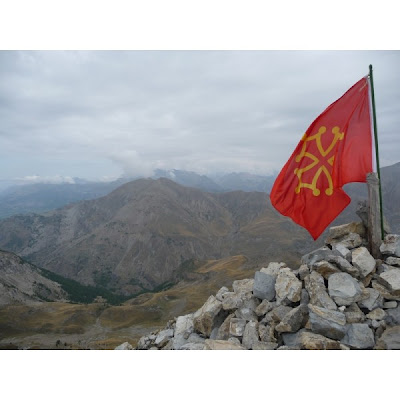 From our Occitany, land of a people occupied and peripherized for centuries by the politic-military bourgeois and imperialist entity called ‘France’, we address frankly and red salute to your struggle, and all our wishes of success in your enterprise to build a Welsh Republican Socialist Party.

‘Republican socialist’, this on our side of the Channel would smell like something of paunchy caciques of our 3d Republic;) !

But the dialectical materialists we are perfectly able to understand this, in a British state remaining, in full 21th century monarchy and where this one (even in the worst vulgar tabloids) is a ‘cultural pillar’ of bourgeois hegemony – in Gramsci’s understanding, to assert oneself as ‘republican’ obviously take on a subversive meaning that it doesn’t in our ‘French’ state, which is bourgeois republic, where the word of ‘republic’ is a ‘magic word’ of the dominant class (to respect its laws and values, is being ‘republican’), is associated to the blood of the Communes repression, to the colonial conquests and wars, to the big workers and peasants butchery of 1914-18, to the ‘lay’

Teachers; denying our peoples, preventing our children to ‘speak britton/occitan/basque etc. and spit on the floor’… And ‘socialist’ obviously doesn’t have the same signification than in our blue-white-red state where a party with this name manage – with time slot the imperialist capitalism for more than 80 years, and typically spread this kind of ‘republican’ bourgeois monopolist values.

That’s what explained, some years ago, the comrades of the solidarity group Liberation Ireland in an interview with France’s Communist Maoist Party. Well, to explain quickly, I’ll say that it’s the opposite to be republican in France.

Here, those putting ahead the republic are cops and teachers, that’s the ideology of the bourgeois state. In Ireland, it’s a revolutionary anti-colonial ideology, something coming from the people, seeking face-off with state and institutions.

That’s the same in Cymru and all the ‘British islands’: to be republican, and moreover socialist, remains the revolutionary ideology of James Connolly from Ireland, John MacLean from Alba !

Then, this is and remain an ideological ‘container’ and the more important is, obviously, the ‘contained’: the conception of the world ;(Weltanschauung)as said Marx and Engels, who maybe visit your country while they lived in England) and revolutionary strategy and the conception of socialist transition toward communism has, as everybody knows and the past century’s experience prove it, when the proletarian Party has taken power, nothing is over…

This conception can, as we see it, only be the revolutionary Marxism of our time Maoism. But this is perfectly valid for a Party asserting itself directly as ‘communist’, something that anyone can do, as a certain Prachanda or a certain Bhattarai in Nepal, for example.

By 1831 in Merthyr Tydfil, as it’s told by your lands, was raised for the first time in history the Red Flag of revolution. Every revolutionary working people in the world has its own legend ; and those of ‘true France’ (as said bourgeois historian Jules Michelet by the same time), the northern France, has its one : the red flag would have been raised for the first time on the Champ-de-Mars of Paris, in 1791… by the repressors : it was the flag meaning ‘fire to kill’ on the ‘plebs’, and then, the revolutionary people would have made it one’s own defiantly.

But it doesn’t matter... What is sure, is this red flag flied on Merthyr Tydfil, and it also flied a lot on our Occitany, at the time of 1848’s ‘democrat-socialists’ and ‘radical republicans’ (when these words still had about the same meaning it has at yours) and of the resistance to December 1851’s bonapartist coup and later at the time of the 1871’s Communes movement which, except the worldwide known Paris one, took mainly place in Occitany (Marseille, Toulouse, Narbonne, Limoges etc.) or Arpitany (Lyon, Saint-Etienne)& our Occitan revolutionary anthem, the Liberate, was then sung for the first time.

Our occitan ‘Midi’, which wasn’t ‘true France’ for northern big owners and other reactionaries, it then became the ‘Red Midi’words sounding at the time like later sounded ‘Russia’ in Europe around 1920, or ‘Cuba’ in Americas around 1960…

For example, in the 1870s, a conservative reporter from the ‘North’ (in actual fact from Lyon, the ‘Midi’s gate’), in a practically ‘colonial’ expedition to the ‘Midi’, could write;“About everywhere, those radical municipalities raise the red flag on their town hall’s pediment, and, if the emblem was forbidden by the Prefect, they roll the tricolour flag to let only the red appear”

This is our historical reality, and all of this is perfectly understandable from a dialectical point of view.

‘Cause for a couple of years know, Servir le Peuple and the comrades who then formed Sheisau Sorelh have deeply analyzed the way that, since the 13th century, was built the state called ‘France’, becoming since the 17th century a colonial Empire  and the meanings of this for class struggle.

We did the same, besides, for the state of your oppressors, the ‘United Kingdom’. And we’ve understood that building itself in parallel and at the service of capitalist development these States have built ‘centres';(as typically the Paris region, or the Greater London and southeast England;and peripheries, and that, if  everywhere;exploited people fight similarly their exploiters, this fight deploys itself, in terms of intensity from the ‘peripheries’ toward the ‘centres'  on worldwide level, from the ‘Third world’, the ‘Storm zone’, toward imperialist ‘G8’but also inside ;these imperialist ‘metropolis’, as ‘British islands’ or ‘France’.

That’s why our ‘Midi’ was and widely remains (despite of strengthening reactionary hegemony in the last 25-30 years) ‘red’, after having been, in the 16th century, a bastion of protestant proto-republicanism (‘Provinces of the Union’) ; and that’s why your Cymru is ‘red’, a socialist and anti-royal bastion under the flag of Merthyr Tydfil.

To tell the truth, our two peoples aren’t just peripheries: they’ve been the first, the founding ones.

The Occitan people lived, in the 13th century, for a part under the dukes of Aquitaine’s authority, whose were also… kings of England ; and for another part under those of the earls of Toulouse and their ‘partners’ kings of Aragon-Catalunya.

It had a brilliant civilization, recognized by all the historians of the world, and even by Engels himself, in a text of 1849.

The first part was conquered in the ‘legendary’ feudal struggle between ‘our’ Philippe Auguste and ‘your’ John the Landless ; that’s, besides, when the Plantagenet were expelled from the continent that they turned themselves toward your Celtic peoples of Cymru, Kernow, Erin and Alba, to enslave them.

The other part’s been annexed in a bloody CRUSADE, a genuine ;war of extermination using as pretext the ‘albigeois’ catharist heresy, just like today, ‘Islamic terrorism’ is used as a pretext for many imperialist wars worldwide.

After these conquests ;‘France’ entity was born as the politic-military framework, then monarchic and later ‘republican’;where the young capitalism could and would achieve its primitive accumulation ;: Philippe Auguste became the first king ‘of France’ – and not ‘of the Franks’. Later, primitive accumulation will go to accomplish itself overseas, giving birth to the Empire, now for the main part so-called ‘independent’, but from which remain some pieces, in the Caribbean, the Indian Ocean and the Pacific.

Wales, on their side, began to be submitted – as we said about at the same time ; and afterwards, under an Henry VIII (nevertheless himself from Welsh descent ; as ‘our’ Henri IV and so Louis XIII, Louis XIV where Occitans, Napoleon was Corsican etc.) who deserves full place in the ‘pantheon’ of tyrants, it undergo the first of these ‘Acts of Union’ which will found the ‘United Kingdom’ – itself as well ‘metropolis’ of an Empire which was at one’s time the largest in the world, actually the first imperialist power in the world until the USA take the ‘succession’ between 1918 and 1945.

In both cases, therefore, the modern State and then the Empire are born from the submission of our peoples, and, in consequence, in a world revolutionary war deploying from the peripheries toward the centres, they’ll die from our revolutionary liberation, liberation occurring in brotherly union with all exploited peoples of the Earth, in the World Proletarian Revolution.

The deathblow to a couple of the most important G8 states, ‘permanent members’ of the UN Security Council belongs to us let’s be up to this historical, world-important task!

That’s why the solidarity of our peoples shall and will be tough like steel toward communism, every peoples of the world are united battalions of a same Army!