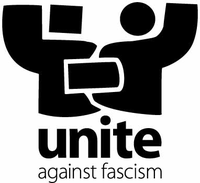 Unite Against Fascism sends its condolences to the family and friends of Lee Rigby, the soldier murdered on Wednesday in Woolwich. There can be no justification for such a terrible attack on an individual.

At the same time we also reject the attempt by fascist organisations such as the English Defence League and British National Party to exploit the murder to whip up racism and direct hatred towards all Muslims.

Last night a mosque in Bletchley was subjected to an arson attack with petrol bomb.

Together with all anti-racists, those of different communities, cultures and faiths, trade unions and others we, now more than ever, must stand up to Islamophobia wherever it raises its head.

Join us outside Downing Street on Monday to hand in our statement following the Woolwich murder.

We will be co-ordinating a peaceful assembly prior to the EDL mobilisation at 3pm.

Our event will include trade unionists, faith representatives, community groups and others.
Posted by nickglais on 5/26/2013 05:38:00 AM