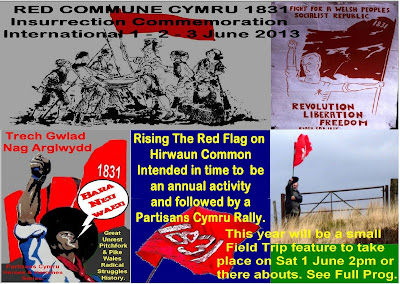 On 31 May 1831, Merthyr Chartist Thomas Llywelyn comes to Hirwaun, the previous day he had spoke at an huge Chartist Rally at Twyn y Waun Common.

He was hoping to hold a similar Chartist Reform rally on Hirwaun Common under a White Reform flag, however militant workers more concerned with ''natural justice'' than ''political reform'' had other ideas.

The ''natural justice'' radicals as Lewis Lewis, Dic Penderyn and others however, had their own plans and after seizing the white reform flag, they sacrificed a calf (local tradition speaks of a lamb) and bathed the white Reform flag in it's blood.

This Red Flag became their Flag of Liberty over tyranny and would lead them forward seeking ''natural justice'' from the oppression and exploitation of Iron Masters and their lackeys.

By 1 June, the workers had established ''Armed Positions'' in the ''Barrios'' of Heolygerrig and Cefn Coed, by 2 June marching on Merthyr, the militant workers and their radical leaders soon raised up the populace in revolt - WELSH INSURRECTION 1831.