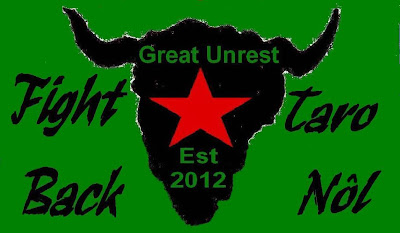 Today 6th March 2013 in the British Parliament in London, Jonathan Edwards the Plaid Cymru member for Carmarthen and East Dinefwr managed to get a debate on the proposed Brechfa Forest West Windfarm Development.

What is clear from this debate is that the decision for the Brechfa West Windfarm will be made in London in the coming week by a Minister who never been to the Brechfa Forest in Wales or visited the site to hear the views of the local people.
When the local people have a say like at the neighbouring Llanllwni, they convinced Carmarthen not to proceed with a proposed windfarm project.
However the Brechfa West Windfarm decision will be not be made in Wales or Carmarthenshire but in London to avoid more Llanllwni's and local democracy.
Here is Statement of Jonathan Edwards Plaid Cymru MP in the London Paliament.
"The Merched Beca uprising of the 19th century was spawned in the communities of north Carmarthenshire, and if the worst fears about pylons are realised, there will be huge protests throughout Carmarthenshire, as we have seen in mid-Wales.
If the Minister is not prepared to give a guarantee, my constituents would expect a moratorium on the Brechfa West application until additional planning applications for electricity infrastructure are submitted.
As UK Government energy planning policy dictates, the applications should be considered together, otherwise the people of Carmarthenshire would rightly feel they have been misled by his Department, the Labour Government in Cardiff and the multinational companies involved in the development.


Given that there are 10 turbines in Alltwalis, that 15 turbines are currently being erected on Betws mountain in TAN 8 area E and that a proposal for 21 further turbines was recently refused for Llanllwni mountain in the TAN 8 area of north Carmarthenshire, it seems logical for electricity infrastructure proposals to be submitted in tandem. Only then will those passing judgment on the applications have a true and accurate picture of the impact the developments would have on the communities I represent"

The Great Unrest Group for a Welsh Socialist Republican Party finds it extremely insulting to the people of Wales and Carmarthenshire that London can enforce a decision on the  people of Brechfa against their democratic will.

We welcome the good work of Jonathan Edwards exposing the actions of The Con Dem London Government but we are not foolish enough to believe that Plaid Cymru will defend the Brechfa Forest and its good people.
Plaid Cymru has been at the forefront of promoting the Great Windmill Corporate Scam in Wales under a completely fake "green " banner powered by the great bag of wind that currently resides in the English House of Lords has one of the Plaid Cymru's London representatives.
The Great Unrest Group calls on people throughout Wales to take up the banner of Brechfa - the banner of a battle for democracy in Wales.

We are the Welsh people and our anger will not cease until justice is done.
Statement of the Great Unrest Group for a
Welsh Socialist Republican Party
6th March 2013
.
Posted by nickglais on 3/06/2013 10:42:00 AM