A New Pope and "The Most Corrupt Vatican Since the Borgias"

Matthew Fox (former Catholic priest) discusses the Vatican's work with the CIA and it's alliance with far right political forces and Pope Francis' opposition to liberation theology in Latin America.

Democracy and Class Struggle says the idea of Matthew Fox of making another CIA Asset the Dalai Lama Pope is insane.

Lamaism is an insult to Buddhism has anyone has who has studied Buddhism seriously knows.

Lamaism is a mixture of  Bon Animism with local Tibetian myths mixed with elements of Buddhism.

Chinese Reform Buddhists are quite progressive Lamaists are reactionary just like the leadership of the Catholic Church. 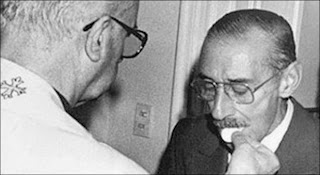