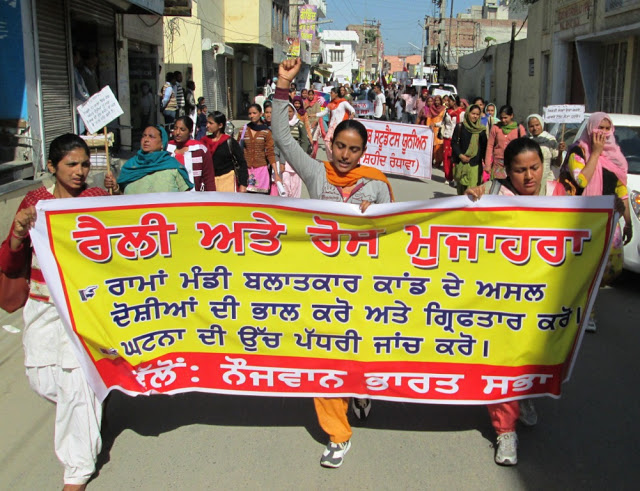 In the state of Punjab  one is literally witnessing a torrent flowing or a storm. The people’s hearts are burning  like a red flame. In recent months some of the most memorable events have taken place in the democratic revolutionary movement.In all fronts struggles have sprouted.

The Naujawan Bharat Sabha, named after Bhagat Singh ‘s organisation and re-organised 2 years ago and the Punjab Students Union (Shaheed Randhawa group) has made some significant contribution to the democratic movement, doing painstaking work.

The main aspect that the Naujawan Bharat Sabha is countering is the feudal and Imperialist culture as well as the consumerist culture. Use of drugs is also predominant amongst the youth .The youth organization raised  lower level classes for youth  on at ground level.

The author interviewed the secretary of Naujawan Bharat Sabha,Pavel Kussa in Bhatinda.

He explained that the revolutionary consciousness was low in the youth and it is a herculean task to organize them in mass political movement.However he expressed  hope .

The Punjab Stubents Union (Shahaeed Randhawa) and Naujawan Bharat Sabha took up the issue of lack of facilities in government schools, in Bhatinda,Moga and Muktsar districts.

They have taken the initiative to organize the youth of Punjab against deterioration of conditions in education, lack of infrastructure in schools ,lack of playgrounds, insufficient number of schools in villages ,very low ratio of teacher to student in villages ,no educational activities etc.

The schools in villages are 60% vacant.

It propagated amongst the youth that privatization was a weapon in the hands of the ruling classes to rob the majority of the youth of facilities and to uplift the condition of the wealthier section of the youth.

It demanded the employment of teachers in vacant spots in schools and the need for a significantly greater  number of teachers to fill posts as well as grants for the poor educational institutions.

It investigated conditions in the schools.In Ramamandi village in Moga it mobilized 300 youth for the right to education.A monthly youth magazine ‘Naujawan’ is brought out on the issues of the youth propogating the values and politics of Shaheed Bhgat Singh.

The theme of the propaganda of Naujawan Bharat Sabha was that the problems of the society were collectively faced by the youth,peasantry,working class and various sections of society collectively.

In Faridkot the Naujawan Bharat Sabha launched a campaign against the kidnapping of Shruti  by goons of the ruling Akal Dal govt. Traders downed shutters and locals took to the streets on October in Punjab’s Faridkot town to protest Punjab Police’s failure to act over the kidnapping of a teenaged girl by a local gangster last week.

The girl, a Class 10 student of a local convent school, was kidnapped from her house Sep 24 by an armed gang led by local gangster Nishan Singh. Her parents were assaulted by the gang and had to be rushed to hospital.

The protestors criticised police for failing to arrest the gangster and his henchmen and for not rescuing the girl.

According to reports, the girl was kidnapped by the same gangster in March this year as well. She returned home in August after police traced her in Kharar town, 15 km from Chandigarh.

In spite of the backing of goondas by the deputy chief minister the villagers of Faridkot displayed valiant courage in resisting the entry of any ruling class forces into the village where the rape took place.The two peasant organizations –the Punjab Khet Mazdoor Union and the Bharatiya Kisan Union (ekta-Ugrahan) protested with the Naujawan Bharat Sabha  mobilizing around 8,000 people.

The people heroically combated the iron feet of oppression proving the capability of their combined forces.

On the issue of the rape in Delhi the Naujawan Bharat Sabha launched a protest in a chain of villages in Moga and Bhatinda districts.It propogated that a hard punishment must be awarded to the killers and a strong democratic rights movement must be lodged.

In Ramamansdi a 6year old girl was raped for which a youth from neighbouring state of Uttar Pradesh was falsely convicted.

A protest was lodged explaining how the active state machinery made no effort to catch the culprits.Inspite of the presence of no organization in Ramamandi a handbill was brought out on the issue of women.

The Sabha stressed in the handbill that the aspect of hard punishment on killers was baseless when innocent people are falsely convicted for a crime and that rape crime was related to the feudal and imperialistic nature of the Society which targeted women.

It would be baseless to fight the evil without connecting it to the basic oppressive character  of the society.

The NBS Launched a rally of around 1700 people on how artists could combine with the democratic movement and integrate with the masses.In it’s youth magazine it condemned the hanging of Afzal Guru and joined a protest with the Association for Democratic Rights,Punjab.

On February 27th a protest was held by NBS outside the Bhatinda court for the release of the falsely convicted youth from Uttar Pradesh and for the punishment of the real culprits. About 300 youth including 0ver 200 girl students participated.

In a nursing college a student commited suicide and the new democracy led youth organization claimed that the teacher was the culprit .The Shaheed Randhawa group NBS explained that the suicide was related to the problem of the society as a whole .

In another private college  educational unit students were falsely arrested so the PSU(SR) encouraged the formation of a committee . It supported the committee from outside.

This was again opposed by the New Democracy group  led PSU.

The other most encouraging aspect in the movement in Punjab is the inspiration drawn from revolutionary democratic cultural programmes.

Quoting the Tribune of September 2012

“Thousands of people including a large number of women poured into grain market of this town holding high red flags, banners, mottoes and raising slogans to join the ``Red Salute Gathering” in memory of the supreme builder of revolutionary theatre movement. Gursharan Singh.

The huge gathering full of enthusiasm and emotion which came from all corners of Punjab, travelling long distances, was highly dominated by rural masses who had been enjoying and getting  inspired for decades, by reflection of their aspirations, on the stages of a unique but simple variety of theatre, full of revolutionary message and art, contending to surpass each other.” 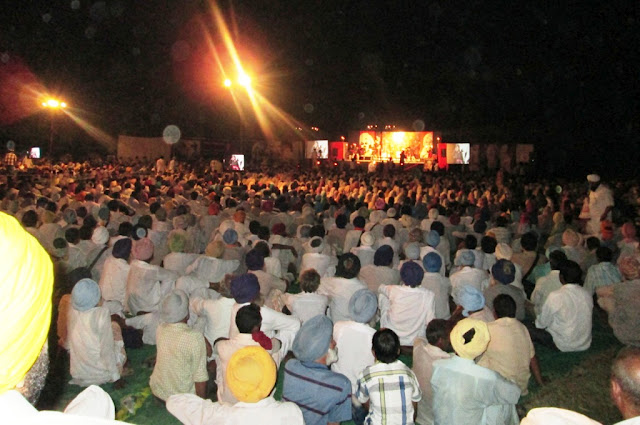 Last September on the 27th  one of the biggest gatherings ever in the revolutionary movement took place in Punjab commemorating the 2nd death anniversary of the revolutionary playwright Gursharan Singh.It literally looked like a red flame reverberating in the hearts of the masses who literally claimed Comrade Gursharan Singh as one of them.The late comrade played a outstanding role in building an anti-feudal,anti-imperialist cultural movement and his plays reflected the aspiration  of the broad masses of Punjab . He literally wrote the language of the masses.

The manner in which the masses identified their personal aspirations with Gursharan Singh was a sight to behold, as though he was one of them.What was remarkable was that the commemoration programme did not project the poltical image of any revolutionary group but only the democratic revolutionary aspect of Gursharan Singh’s role. Prominent theatre activists from India, cultural groups, writers, poets, academicians, students, peasants and people from the working classes gathered at Bal Bhawan to remember Singh — with plays, music and discussions.

The evening saw more than 1500 people view plays such as Dhamak Nagare De, Tunda Hauldaar and Khuh, apart from a medley of revolutionary songs, a documentary titled Sada Safar Te on the life of Singh, and a langar through the participation of thousands of people. "Hundreds of women volunteered with their services to cook langar as Singh always insisted that he would not start a play unless the women were done with their cooking. This was their way of thanking him,'' recalls Iqattar Singh, Director of Chandigarh School Of Drama, which was started by Singh.

More than 50 theatre and cultural groups from all over Punjab, members of Punjab Lok Sabhyacharak Manch, friends and family of Gursharan Singh decided that September 27, Singh's death anniversary, will be marked as Revolutionary Theatre Day.

On January 27th,2013 the Punjab Loksabhyacharak Manch stage a huge gathering on the issue of rape and molestation of women ,highlighting the link between the recent rape cases in Delhi and Punjab  and it’s relation to the feudal society . Addressing issues like crime against women, cultural pollution and to encourage scientific temperament, a function was held at the SSD Girls' College. Vinay Mahajan and Charuk Bharwada from Loknaad, Ahmedabad, presented their much acclaimed play, "Hum Insaan Hain", before an enthusiastic audience.

Through the presentation, Charul and Vinay raised issues like the Shruti abduction case, Kiranjit murder case in Mahal Kalan, Damini gangrape case in Delhi in Punjabi in their bid to connect with the local audience. They presented the pain of being a woman and the testing times that the fair sex is facing. Earlier, the Manch released audio and video cassettes of Vinay and Charul, awarded them with a memento and released a calendar.

At the end of the function, the lights were switched off in the auditorium to mark the darkness that prevails in society. The darkness was dispelled by lighting candles, which signified knowledge and wisdom.The response was tremendous.

The NBS launched a convention in Bhatinda mobilizing 400 activist on the issue of the women’s situation and the viewpont of the late revolutionary dramatist Gursharan Singh. A theatre day was organized with a series of cultural programmes  and a youth team was prepared to perform cultural programmes on the revolutionary role of women and their oppression in Society.It received a tremendous response. 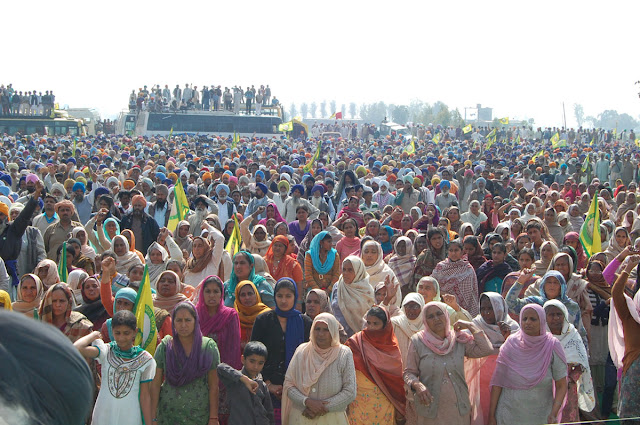 On the 3rd death anniversary of  the late Sadhu Singh Taktupura,(vice –president of the B.K.U(ekta-ugrahan)a huge commemoration programme was held in a bordering village of Amritsar district where Com.Takhtupura was slain by goons of the ruling Akali Dal part.Around 10,000 people participated parading into the village like bees swarming in a nest.

The Bhartiya Kisan Union (Ekta-Ugrahan) staged a dharna recently outside the office of the Economic Offences Wing (EOW) of the Bathinda police to protest against the delay in pursuing a case registered against Ambala-based seed manufacturing units having dealers in Sirsa.

The agitators said despite spending huge amount of money on labour, water, sprays and urea and putting in a lot of hard work, farmers got nothing as the seeds were spurious.

The Punjab Khet Mazdoor Union (landless labourers peasant front), Faridkot, on Wednesday held a dharna at the mini-secretariat to condemn the registration of cases against 50 people from Panjgrain Kalan and Wara Bhai Ka village for possessing plots allotted to Dalit families, at Bajakhana police station on February 22. They claimed that the plots had been allotted to landless families in 1974 and they had paid installments to the panchayats department. They also demanded that such beneficiaries should have been given rights of the plots after three years. The protesters demanded that 27 people from Wara Bhai Ka village, eight from Nangal, 14 from Bhana and 60 from Kabulwala are in the dire need of plots to build houses. They also demanded payment for MNREGA works carried out by labourers at Surghuri, Madak, Hasan Bhatti and Moranwali villages.

Another encouraging recent development is the resurrection of the Association for Democratic rights, a civil liberties organization that earlier played an important role in the democratic revolutionary movement in the 1970’s and 1980’s.


For the last 15 years it  was hardly very active as in the earlier years. It organized a convention on the violation of rights of women in Bhatinda on February 28th.