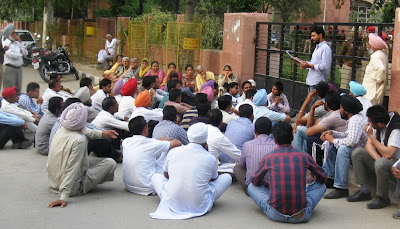 The Naujawan Bharat Sabha(youth front) has been doing work in solidarity against the arrests as well as the Punjab Khet Mazdoor Union,whose leader adressed the anti-repression protest.

Update on repression being let loose in the Punjab

Association of Democratic Rights (AFDR), Punjab held a press conference in Kisan Bhawan, Chandigarh on 13the March and condemned the ongoing arrests of around 2000 farmers and leaders of farmer organisations in Punjab.

The AFDR said that due to ruthless economic policies of the state and central government, the farmers are in deep crisis in the state. So to lodge protest and struggle for their demands is the democratic right of the farmers.

The AFDR said that instead of indulging into ruthless repression the government should have adopted democratic means and should have engaged the farmers and their organizations in negotiations.

Significantly, the Punjab police raided 319 separate locations on the morning of March 6 and arrested 155 farmer leaders. Following that total 1353 people were arrested and they were sent to various jails in the state. The situation has led resistance and restlessness among various sections of the society.

Crossing all limits of democratic set up, the police even arrested those people who had gone to meet the jailed leaders and activists. The flag marches were organied in Mansa district. In Amritsar district besides, Amritsar police, around 1400 Indian reserve police force has been called to supress the farmers.

Even those who have been arrested have been shifted to jails which are faraway from their home districts. The AFDR understands that it is being done to demoralize the protesting farmers.

The Association also feels that instead of going for an independent probe in the death of ASI in Taran Taran, the police have acted with a bad intention of settling the score and they have booked 13 farmer union activists under Section 302 of IPC for charges of murder.

It has been done despite the fact that the postmortem report of the ASI says that he died due to cardiac arrest and there were no signs of any injury on his body.

The Association once again demands from the state government to start political dialogue with farmers instead of slaughtering the democratic rights by organizing flag marches and mass arrests.

According to the facts collected by the AFDR following number of people were arrested from various places and have been sent to jail:

Democracy within its value frame assumes the right to protest as a vital means towards ensuring the guarantee of those rights and values it stands for. However, today we are witnessing a different ‘culture of democracy’ where the right to protest is increasingly becoming not just an empty notion, in fact, protest itself is being turned into an offence.

The mass arrest of members and activists of 17 peasants’ and workers’ organizations in Punjab as a preventive act of securing law and order situation is symptomatic of this different ‘culture of democracy’.

On 6 March, members of these organizations had decided to jam rail traffic under their state-wide ‘Rail Roko’ agitation to push for their long pending demands after witnessing a prolonged response of apathy from the government.

The farmers have been demanding an increase in the Minimum Support Price based on the price index, as per the Swaminathan Committee report, more subsidies for the poor and checks on the hike in prices of diesel and other farm inputs. Government responded in pre-emptive confinement of those involved with the agitation, under the name of protection law and order situation.

This act of police repression is an attempt to quell the protest aimed at securing what has been due to the farmers and workers for long. In the given political climate of state repression we apprehend fabrication of false charges against those participating in this people’s movement. The forebodings of such acts are clear in ending into a deterred space of struggle for democratic rights, something that defeats the end that democracy is meant to achieve. PUDR strongly condemns this act of repression by the state elite and demands the immediate release of the activists. PUDR also extends solidarity with protesters and their demands.
Asish Gupta and D. Manjit
(Secretaries, PUDR)


Police crack down to fizzle out rail roko agitation

Seventeen farmer and labour organisations had given a call for ‘Rail Roko’ agitation for today (6 March ), with a view to pressurise the Central and Punjab Governments to accept their pending demands and new issues.

In order to disrupt the Rail Roko, the state government unleashed a reign of terror. Apart from routine forces, additional force of 10,000 police personnel was mobilised and pressed into law and order duty throughout the state.

17 peasants and workers organisations in Punjab were going to jam rail trafick today in order to protest against government policies and for their long pending demands.Instead of considering the genuine demands and issues, the state government has unleashed chain of repression through out Punjab. In the wee hours today, Patiala police arrested Jagmohan Singh, provincial general secretary of Bhartiya Kisan Union (Ekta Dakaunda), its distt. president Dr. Darshan pal and distt. secratary of the union Satwant Singh Wazidpur and took them to some undisclosed place. Its is feared that the police can imlicate them in some false cases.This state repression is extremely condemnable and will not deter the spirit of struggle. All democratic and progressive forces should condemn this repression and demand that arrested peasant leaders should be released immediately.