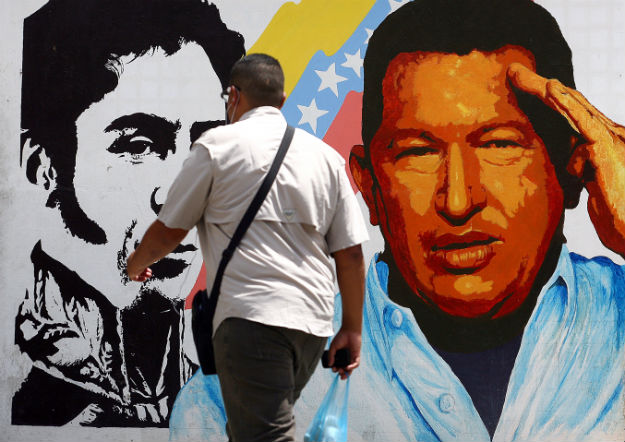 Democracy and Class Struggle publishes this contribution  by Saba Navalan to understand what was universal and what is specific in the contribution of Hugo Chavez.

The author thinks that the Chavez  experience has many specific features and is not universally applicable.


Fear has invaded all of us that we cannot escape from the US imperialist wicked hands, when a single man from the backyard of US stood with his straight chest to live for his own people.

Hugo Chavez was the people’s hero of our era. The progressive and democratic forces of the world have lost a people’s hero.

Hugo Chavez died at the age of 58. Thousands of Venezuelans have been weeping and crying on the streets of Caracas since they heard the sad news. Chavez showed the world that defiance of anti-imperialist politics is practically possible and successful.

In every corner of the world every single man cowardly prostrated to imperialist order, Chavez tried to change the world on his own.

Born in a poor middle class family, he started his professional life as a military soldier in 1971. Later he became the leader of United Socialist Party, then became president of Venezuela in 1999.

Chavez built the national economy against the daylight robbery of multi-national corporates and brought forward Venezuela several years ahead.

Chavez had been elected via the parliamentary democracy which is the US’s days to day exclamation.

The coup orchestrated by the internal pro-imperialist forces such as churches, multi-national corporates, feudal elites, pro-west Medias was a shameful failure for them.

He escaped from the roof of the presidential palace and returned back at the same day.

This US backed coup made him popular in the country and throughout the world, as the coup was blocked by the public mobilization.

Since then, multiple attempts of coup against him were successfully defeated.

Indefatigable Chavez from continual pressure and attempts to murder him , he used the money that he received from the oil production for the people’s welfare.

Chavez’s government snatched the oil fields from the hands of profit oriented multi-nationals and nationalized them for the countries profit. Thousands of companies have been nationalized including banks.

Among the other states of the world which build the infrastructural setup profitable for the multi-national corporates exploitation, Chavez invested the oil profit in food, education and health.

The World Bank sitting in the heart of US factually approved that Venezuela’s poverty has fallen by 50 percent within the decade. At the same time the number of educational institutions has doubled.

Chavez’s nationalist actions are named after Simone Bolivar who played a key role in independence from Spanish empire and considered as most important figure in Latin American history.

Followed by Chavez, his sympathizers, supporters, followers, some democratic and forces even leftists denoted him as Bolivarian socialist.

Some went to the extent to say his nationalist consciousness is 21st century’s socialism.

In all the oil countries the state structure is one or another, feudal system. The idle and constant productive forces remain unchanged. Iraq, Saudi Arabia, Qatar, Libya, Kuwait and Bahrain have an absolute feudal system where the Kingdom is the unifying factor for the people and the religion is the philosophical super structure of it.

The oil resources in those countries are the personal properties of handful of people who rules or influence the ruling class. The citizens of these countries maintains a modern master and slave relationship with the oil landlords. This is a modified version of feudal system. The modification also emerges in order to cope with international collaborators of the feudal elites. The imperialists wants keep the system unchanged as it is easy for them to exploit the resources easily.

Since Chavez came into power the Venezuelan feudal system has gone through its difficult period . Until 1990, nearly a decade the IMF has tested another way of exploitation.

The World Bank was active in Venezuela from 1961 to 1974, disbursing thirteen loans worth US$340 million. Because of its high per capita income, however, Venezuela did not become eligible for World Bank financing until 1986.

In 1989 it received over US$700 million in the form of a structural adjustment loan and a trade reform loan. Venezuela also used its large and previously untapped reserves at the IMF in 1989, when the IMF disbursed the first installment of a three year Extended Fund Facility in the amount of US$4.8 billion.

These new funds helped ease the country's painful transition to a more open economy, a transition undertaken largely on the advice of the IMF and the World Bank.

Both IMF activities and the South American anti-imperialist consciousness have started a strong wave against the Venezuelan feudal system in late 90s.

Chavez led anti-feudal feeling and elected as the country’s president in 1999.

The nationalization of oil industry is one of the important political move of Chavez. Since he nationalized the oil industry, its was no longer the property of some unaccountable number of feudal elites but capital of Venezuela.

Followed by the nationalization, it emerged a national capitalist class, which has a historical importance in the country.

The country had been divided in to two ruling class sectors:

The conservative feudal elites are the hope of imperialists, backed by them, handled and fed by them. As the anti-national feudal forces always have the strong support of US imperialism, they are still very much alive and have not be eliminated.

The failed Land Reform proposed by Chavez shows that the feudal forces who are ready to act as comprador are still alive.

His fight against the corrupt feudals used to be the heart of his economic plan.

* In 2007, Chavez's government nationalized a majority stake in four oil projects in the vast Orinoco heavy crude belt worth an estimated $30 billion in total.

France's Total SA and Norway's StatoilHydro ASA received about $1 billion in compensation after reducing their holdings.

* In 2009, Chavez nationalized a major gas injection project belonging to Williams Cos Inc and a range of assets from local service companies. This year, the energy minister said the government would pay $420 million to Williams and one of its U.S. partners, Extern Holdings, for the takeover.

* In October 2010, Venezuela nationalized Fertinitro, one of the world's biggest producers of nitrogen fertilizer, as well as Agroislena, a major local agricultural supply company. It also said it would take control of nearly 200,000 hectares (494,000 acres) of land owned by British meat company Vestey Foods.

* Vestey had already filed for arbitration over the earlier takeover of a ranch. Chavez said the latest deal with Vestey was a "friendly agreement."

* The government has closed a dozen small banks since November 2009 for what it said were operational irregularities. Some were reopened as state-run firms. Brokerages have also been closed and some employees jailed. Chavez has vowed to nationalize any bank that fails to meet government lending guidelines or is in financial trouble.

* In October 2010, Chavez ordered the takeover of the local operations of Owens Illinois Inc, which describes itself as the world's largest glass container maker.

* In August 2011, Chavez said he was nationalizing the gold industry. Toronto-listed Rusoro Mining Ltd, owned by Russia's Agapov family, was the only large gold miner operating in Venezuela, and this year it filed for arbitration.

* In 2007, the nation's largest telecommunications company CANTV was nationalized after the government bought out the U.S.-based Verizon Communications Inc's 28.5 percent stake for $572 million. Analysts said Verizon received fair compensations for its assets.

* In 2007, Venezuela expropriated the assets of U.S.-based AES Corp in Electricidad de Caracas, the nation's largest private power producer. The government paid AES $740 million for its 82 percent stake in the company. Analysts described the deal as fair for AES.

Followed by nationalization, national capitalism has developed and feudal power is weakened. Therefore Chavez has a progressive role in our era and found a way to implement national capitalism against the imperial power and its allies as a single man.

Oil revenue helped him to implement such a strong national capitalism against the imperial power, which is not an example for the other countries which don’t have resources to turn into capital.

Even inside of the Venezuela, it is not sustainable in the long run. The proletariat has to unite and be led by a political party.

However national capitalism in 21st century has a progressive role in our world as it has a anti-imperialist role.

Very well written. He tried his best as a nationalist capitalist. Socialism? that is something else.

In many ways, I would grant him the honor of being compared with Doctor Mohammad Mossadegh who nationalized Oil in Iran.

All that said still, if I was alive, I would rather take the side of the above mentioned Nationalist leader rather than pro Stalin Tudeh Party of Iran whose politics abused people's national liberation in Azerbaijan and Kurdistan of Iran as toys and games only to get a good deal for the interest of the Soviet Union. Why? Since when the people of those provinces of Iran were ready for their place to build socialism, in exchange for Stalin's indifference to what Iran will do to revolutionaries, oil would be granted. Thus communists and national liberation fighters of those two provinces were killed and, also when the CIA instigated the coup to overthrow Mossadegh, having a good hand in Iranian military leadership of Tudeh Party didn't do anything to save Doctor Mosaddegh. Thus in practice same way CIA?FBI used AFL CIO of the US to put Venezuelan workers to go on strike against the their nationalist leader, KGB led Tudeh party did same through Tudeh Party that acted exactly like an imperialist country's agents would have done. Does that have anything to do wish socialism? Was Russia socialist, etc. are other topics to be discussed in their own place but, this article says it well and comprehensive.