Quantitatively it only comprised around 250 people mainly students but qualitatively it had great significance.

It lit the torch against the iron feet of opression of Brahmanical Hindu fascism which provoked a suicide of a student and got 5 phd dalit students expelled. 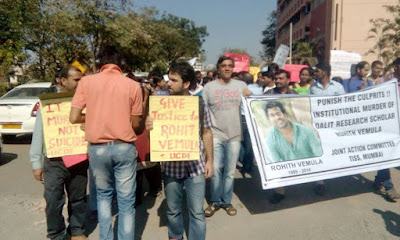 It was touching witnessing the fire in the hearts of students from Tata Institite of Social Sciences who raised slogans against the fascist policies of the R.S.S.and the communal University authorities.

The leaders explained how the Brahmanical socio-economic policies of govt compelled Rohit Velmule in commiting suicide and he was a victim of state apathy. 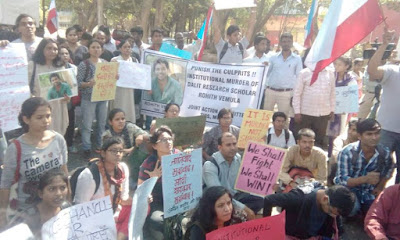 They took the vice-chancellor of Bombay University to thask and virtually put him on the backfoot.

It was heartening to see the unity of students from different sections like T.I.S.S,I.I.T,U.C.D.E etc.

This defiant resistance by students is an expression of the potential of the students in resisting hindu communal fascism from impeding a progressive student movement.

Participating in the protest I was really impressed with the organization of the students.Student leader Ajmal adressed the gathering .Such protests sow the seeds for an organized movement in the future.Student magazine Aaghaz was also sold.

A protest was organised today in Mumbai University, Kalina campus by UCDE, AISA, TISS Joint action committie, Republican panther and other democratic organisations. Protestor demanded immediate arrest of Bandaru Dattatreya as well as VC and proctor of University for forcing Rohit to suicide. 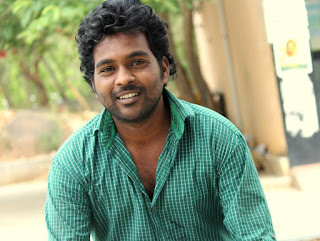 Our brother and comrade  Rohith Vermula

The death of Rohith Vermula at University of Hyderabad is a grim reminder about the persecution faced by the dalit, babujan, adivasi and minorities, especially in educational institutions.

The chain of events and incidences staring form the 1st of august 2013 which culminated to the expulsion of daily scholars and the death of Rohith, brings to the fore the malicious and casteist role played by the Hindutva brigade led by the ABVP president at UoH and the BJP MLC Ramahandra Rao who termed 'Dalits’, as ‘anti-national.’ They were aided by an inept and complicit action taken by the UoH administration, and the VC in particular.

We, the joint action committee of students at TISS reiterate the demands of the movement at UoH:

The police should register a SC/ST atrocity case against the VC and the ABVP president, the BJP MLC and others responsible for Rohith's death.

We demand that the UoH revoke the expulsion of the Dalit students who were expelled.

This moment is a rallying point for all student organisations to stand behind the movement at UoH. We as a part of the larger student community must lay waste any vestige of apathy and ignorance of this struggle.