Norway : One law for us – another for them

Hate against the class enemy´s state

Democracy and Class Struggle has been monitoring the trial of our Norwegian comrades during the past week from Norwegian Newspaper Reports and notes that the Norwegian State prosecution has presented a very weak case.

The Statement below was issued by Tjen Folket at the beginning of this unjust farcical prosecution of our comrades.

The Neo Liberal Norwegian State besmirches Norwegian people's honour by this trial of our comrades. 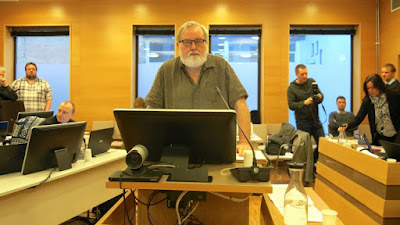 
One law for us – another for them

The so called: “SOS Racism case” has been going on since 2009. It has been a huge and at times intense campaign targeting Serve the People and SOS-Racism. A wide range of public servants, police, politicians and journalists have spent thousands of hours on running a more than 6-year(!) long campaign. In McCarthy´s spirit, they have used the dirtiest of tricks, in the attempt on sabotaging for- and our comrades.

This has been a test of strength that would have been devastating to several, but despite that the Norwegian class-state for years has been smearing and putting a huge pressure on our comrades Serve the People has strengthened itself.

The journalist Eiliv Flydal has spent 6 years of his career writing about SOS Racism and Serve the People. The police and the Norwegian authorities have used enormous amounts of resources preparing this trial. That alone says a lot about how priority this case has and how much prestige there is in having our comrades convicted. The treatment of this case, both in the state bureaucracy and the media is incomparable to what it has been in similar cases, quite contrary it has been used a completely different set of means.

As long as capitalism exists, class-justice will dominate. We have no trust in the Norwegian state treating this case objectively, but act according to its interests in crushing its enemies. When hypocritical politicians talk about peace, freedom and state governed by law, we see the same politicians bombing people, give support to despotic leaders shooting people who demands their basic rights and who have a police-apparatus that surveils seed to revolutionary activity. We still hope for the best and support our comrades.

One law for us – another for them

Those who bombs the people of the world, the wealthy who steal away tons of resources made by the working class. Politicians who create crisis and police officers that hits, kicks and shoot, are never convicted.

The attacks on our comrades will be hard and at times unscrupulous. After all, we are facing our number 1 enemy, the state of Norway. Those who now will be judging our comrades are the same people, from the same class as those who send soldiers and bombers to Libya and Afghanistan, who massacre our brothers and sisters for the interests of the Norwegian bourgeoisie. The system that will now decide how our comrades are to be punished is the same system that choked Eugene Obiora to death in Trondheim in 2006, and let the police officers who killed him get away and keep their jobs. It is the same system that fired shots at Zainab in Oslo in 2015, and the same system that expels thousands of war refugees from Norway, sentenced to a life with no future, security, and for many – a certain death sentence.

We have no trust in the Norwegian state and no big hopes for justice. Instead, we will use the occasion and the coming attention aimed at our organization to ask all who wants to throw this rotten to the core-system in the dustbin of history to contact us. organize and join the struggle!

Anti-communist and journalist Eiliv Frich Flydal has spent 6 years of his career smearing and prosecuting anti-racists and communists.