Fame and Glory to our Martyrs – Lenin-Liebknecht-Luxemburg Demonstration 2016


The bourgeois paper BZ describes this year’s Lenin-Liebknecht-Luxemburg Demonstration (LLL-Demo) as follows “[…] a group of about 2400 youth protesters chanting aggressive slogans walked from Frankfurter Tor to the Central Cemetery. They demanded a ‘World Revolution’. The partially hooded individuals were shouting those words behind banners with heads of mass murderers such as Mao and Stalin. At the cemetery, vulgarities were uttered at the memorial stone for the victims of stalinism.” 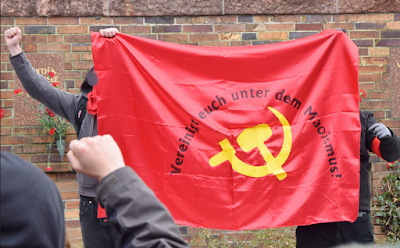 This quote essentially reflects the general developments, being that on one the one hand, more youth are participating in the demonstration and, above all, a new active force is being formed that finally gives the demonstration a militant and offensive character which is exactly how we are contributing to it. It is also an expression of the bourgeoisie’s fear of these developments.

Correspondingly, this year, the demo in the run-up but also following up, was accompanied by stronger provocations and harassment on the part of the cops. Their pretenses were the red bandanas and the carry of self-defence instruments

Despite this, several thousand took to the streets, among them several hundred in the blocks of Maoist organisations and parties.

Our LLL-weekend began already on the eve of with a proletarian cultural event at our friends’ from AT?K-YDG (Yeni Demokrat Gençlik – New Democratic Youth) in Mehringhof (Kreuzberg), where we prepared collectively for the demo on Sunday. With saz music, Turkish, German, Italian and Spanish worker and guerilla songs, halay dances and a rap performance, we let the evening fade away through a comradely get-together.

The following morning we arranged our block at the demo, under the slogan ‘Fame and Glory to our Dead – their Legacy, our Struggle!’, between the Turkish/Kurdish communist parties TKP/ML and MKP. Notably, there was a also a strong presence on the part of AT?K, YDG, ADGH, ADKH and ADHK. 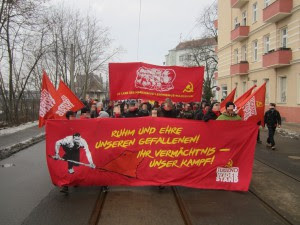 All in all, this showed that various Maoist groups have gotten reinforcement, whereas the sudden crisis of the main contradictions on global and national scales constantly strengthens the ideological bankruptcy of revisionists, social democrats and opportunists that have been attempting since time immemorial to appropriate the revolutionary communists Rosa Luxemburg and Karl Liebknecht and to make their combat for the working class against exploitation and imperialist wars seem harmless.

Our block with up to 50 young comrades is an expression of the altogether positive developments in our organisation in the past year. A process that we plan to sustain in the coming year through strengthened work with the masses and the continued forging of a worker youth conscience.

At the event, we did not only commemorate Liebknecht and Luxemburg, the glorious co-founders of the Communist Party of Germany (KPD) and the great leader of the socialist October Revolution, Lenin, but rather all of the fallen revolutionaries and communists of historical and current proletarian struggles and peoples’ wars.

Our slogan ‘Their legacy, our struggle – The youth offers resistance!’ and ‘Don’t believe the lies of the exploiter – Rebellion is justified!’ as well as `Death to imperialism – people´s war for socialism!` and ‘Storm forward to communism – under the guidance of Maoism!’ are evidence of both the militant spirit of our block as well as of an ideological clarity.

At the ‘Cemetery of Socialists’ in Berlin-Friedrichsfelde, we broke through the general individualized and depoliticized silence of the bourgeois ‘grief cult’ through our collective expression in front of the anticommunist eyesore called the ‘Memorial Stone for the Victims of Stalinism’ that was built there by the ‘red’ bourgeoisie for the Hitler-fascists, imperialists and other scum.

We confronted those present with a loud and historical truth, “The Red Army and Stalin’s Guerillas smashed the Nazi-Wehrmacht!” and “Marx, Engels, Lenin, Stalin, Mao – Viva! Viva! Viva!“. 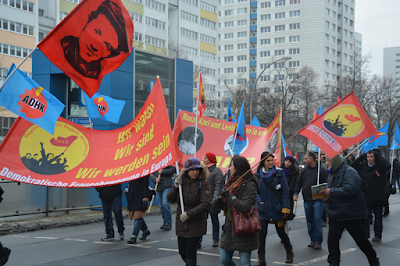 In the central ring of the cemetery we gathered up to sing the Internationale – the anthem of our class, which followed by a workers‘ song dedicated to both of the communist martyrs Rosa Luxemburg and Karl Liebknecht, ‘Auf auf zum Kampf’. Apart from that, a comrade made a small speech, in which he highlighted the necessity to build up on our strengths and to learn to lead the struggle in our own way. The comrade also pointed to the following year, which marks an important milestone of our ideological struggle – the 50th anniversary of the call to the Great Proletarian Cultural Revolution and the 40th anniversary of Chairman Mao.

We are convinced that, in the scope of the LLL Demonstration, a reasonable and honourable proletarian revolutionary commemoration of Lenin, Liebknecht, Luxemburg and all of our other dead is only possible when their revolutionary heritage is held up, defended and applied in the field. Only when we take the responsibility on ourselves and develop the struggle for the Socialist Revolution and against imperialism, revisionism and reaction in this country. This will be done only by our social class in an organized and disciplined form. The tasks are clear. We vowed it.

Their Legacy, our Struggle – The Youth Offers Resistance

Fame and Glory to our Martyrs