Nepal : Proclamation of autonomous Abadh state in Nepal for the operation of a parallel government by the new Communist Party of Nepal Maoist 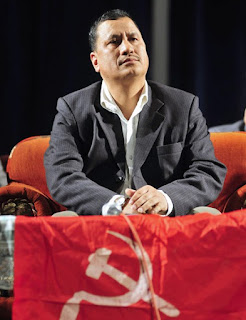 At the function, politburo member and Revolutionary People’s Council Nepal Chief Santosh Budhamagar likened it to the independent province created during the Maoist insurgency and said that it would play the same pivotal role.

Budhamagar said his party would soon unveil the rules and regulations of People’s Council and autonomous state.

At the programme, party central member and Lumbini Sub-bureau in-charge Chandra Bahadur Chand urged the party rank and file to be ready to take the party to a new height.

Other speakers said that they were preparing to set up party mechanism at the district and village levels to take the agitation to a new height.

The assembly is led by Basanti GC. Similarly, the assembly has declared Abadh Provincial People’s Council.

Nathuram Tharu and Chaitraram Musihar are the chief and deputy chief of the people’s council. Earlier, Maoists declared autonomous Magrat, Tamsaling, Tharu states, among others.

At the press meet organised after declaration of Abadh state, Maoist politburo member Santosh Budhamagar said that his party had kept the form of agitation open.

He warned that if they were suppressed they would retaliate against the government. “Our party was forced to revive the old structures as the government was unable to solve the people’s basic problems after India’s blockade of Nepal’s border points “, Budhamagar said.

On the allegation that his party was fighting to revive the defunct monarchy,

Budhamagar clarified that it was his party that had fought for ten years to abolish monarchy.

He warned that youths in his party might wield weapons at any time if the need arises.

In a move that may may bring the current political dispensation to a new threat, a splinter group of the Maoist Party announced the revival of the “peoples government”, with a message that another “armed insurgency” may be round the corner.

Maoist group led by Netra Bikram Chand ‘Biplab’, a fierce commander from the decade-long insurgency that ended in 2006 with the Maoists deciding to join the peace process, decided to form the “peoples council”, an equivalent of the “peoples government” since dissolved, at the end of a secret meeting held some three weeks ago in the capital.

A senior functionary of the group told ENS that “conveners” for provincial and district level councils have been formed, and further course of actions would be decided soon.

The news about revival of the council follows series of complaints lodged “unofficially” with the police by many individuals that they are being “threatened of dire consequences if they did not comply to the request for donation by the group” indicating that the Maoists-era extortion campaign is also back.

The Unified Communist Party of Nepal-Maoists that joined the peace process in April 2006 has since split into five groups, but Biplab’s is the group that has revived guerrilla training, and has now announced formation of the council.

Baburam Bhattarai, second-in-command in the party all these years and a former Prime Minister, quit the party but is now busy building a “third force” apparently with a non-communist ideology.

There are speculations that the Maoists did not “hand over” their entire armoury when they joined the peace process, and a substantial part of it was “hidden” under the supervision of Biplab
Posted by nickglais on 1/13/2016 04:17:00 PM