97 Year Ago Rosa Luxemburg Murdered; Remember the treacherous role of Social Democrats - a lesson from History

The spy office of the Reichstag Regiment founded by the Social-Democratic Party set a bounty of 100,000 marks on the heads of Liebknecht and Luxemburg.

On the 13th January, 1919 two days before the murders the Social-Democratic Party paper Vorwärts carried a poem calling for the assassination of the two communists.The last verse of this ended:

It was not without foundation that John Heartfield was to craft the photomontage entitled 'Fraternal greetings of the SDP' in which the deathhead of Karl Liebknecht was depicted below the masthead of the SDP paper Vorwärts which was shown dripping with blood. 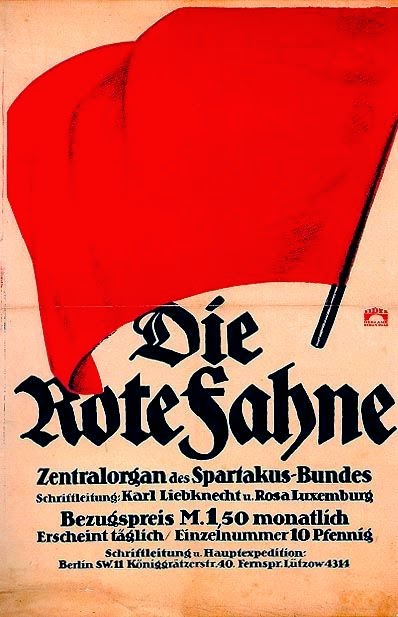 An excerpt from the Spartacist Manifesto (published in 1918):

For the dictatorship of the proletariat does not mean bombs, putsches, riots and anarchy, as the agents of capitalist profits deliberately and falsely claim. Rather, it means using all instruments of political power to achieve socialism, to expropriate the capitalist class, through and in accordance with the will of the revolutionary majority of the proletariat.

Leo(n) Jogiches (17 June 1867 – 10 March 1919),[2] also known by his party name of Leon Tyszka (Tyska, Tyshko,Tyshka) was a Marxist revolutionary active in Lithuania, Poland, and Germany.
Jogiches was a contemporary in Vilnius, his birthplace, of Felix Dzerzhinsky and Arkadi Kemer. Little is known of Jogiches' early years due to his secretive work habits ingrained through years of conspiratorial work.

He joined a revolutionary circle and became a leader by 1885 before getting arrested in 1888 and 1889.[2] In 1893 he helped form the Social Democratic Party of the Kingdom of Poland (SDKP, later SDKPiL) along with Rosa Luxemburg. Jogiches and Luxemburg fell in love with each other, a love that lasted their whole lives despite the difficulties.[3]

The work of the two cannot be separated in the least, although a clear division of labour is observable, with Jogiches the organiser and Luxemburg the theorist.
Jogiches was a founding member of the Spartacus League, a revolutionary left-wing organization of the Social Democratic Party of Germany, formed at the beginning of World War I by Karl Liebknecht, Luxemburg, Franz Mehringand others. On 1 January 1919 the League became the Communist Party of Germany.
The Spartacus League led the German communist revolution of 1918/1919, which failed, after which Luxemburg and Liebknecht were murdered by government troops.

Jogiches was murdered in Berlin while trying to investigate the assassination of Luxemburg and Karl Liebknecht.


Democracy and Class Struggle has serious political disagreements with Rosa Luxemburg on the National Question but regard her has a valued revolutionary comrade.

Mao Zedong encouraged largeness of mind amongst communists something the narrow minded sectarians have long forgotten.

We salute her memory in these cold January days has they remind of how the German working class in November 1918 put an end to the First World War - it is the people who make history and nobody represented the people more than Rosa Luxembourg and Karl Liebneckht in November 1918.
Rosa Luxemburg was born in Poland in 1871 and lived and worked in Germany from 1898. She was an early opponent of the revisionist E. Bernstein, actively opposing the ministerialism of Millerand and the opportunist compromises with bourgeois parties.
Her writings on these questions were collected in 1899 in Social Reform or Revolution? With regard to the split in the Russian Social-Democratic Labour Party Rosa Luxemburg did not accept the Leninist views on the need to construct a proletarian party.
Stalin noted that Luxemburg had declared for the Mensheviks, arguing that the Bolsheviks had tendencies to Blanquism and ultra-centralism.
During the Russian Revolution of 1905-07 she drew closer to the Bolsheviks on many questions of the strategy and tactics of the revolutionary struggle.
Rosa Luxemburg correctly understood the role of the working class as the decisive force of the revolution, recognised the need for an armed uprising against tsarism and the establishment of the dictatorship of the proletariat.
Luxemburg expressed complete agreement with the Bolshevik view that the liberal bourgeoisie was a counter-revolutionary force and that the peasantry constituted a revolutionary class.
Drawing on the experience of the 1905 revolution she supported the greatest possible development of the extra-parliamentary struggle of the masses and stressed the need to use the mass political strike.
For her anti-militarist struggle she was imprisoned during the First World War.
In her major theoretical works on political economy Rosa Luxemburg presented a critique of capitalism and imperialism where the aggressive colonial policies were described; she upheld the view, however, that the accumulation of capital under capitalism was possible through the expansion of the sphere of exploitation of the non-capitalist sectors so that imperialism was defined as the struggle of the capitalist states for the non-capitalist environment.
Accumulation of Capital by Rosa Luxembourg should be read by those of who have not read it has it contains many valuable insights into Imperialism today even though published in 1913.
Despite her important theoretical contribution Rosa Luxemburg deviated from Marxism on a number of questions: to wit, on the denial of the right of national self-determination and an underestimation of the revolutionary potentialities of the peasantry.
From the beginning of the First World War she criticised the imperialist character of the war and the betrayal of the social-democratic leadership.
As a founder and leader of the Spartacus League she authored a number of anti-war tracts.
Luxemburg greeted the October revolution, commended the role of the Bolsheviks while incorrectly evaluating the Bolshevik tactics on the agrarian and national question, and the dispersal of the Constituent Assembly.
Her critiques of Bolshevik tactics have been widely advertised by the spokesmen of U.S. imperialism notwithstanding the fact that she retraced her steps on a number of questions relating to the Bolshevik revolution and made a turn towards Leninism defending the dictatorship of the proletariat and the Soviets in Germany.
Karl Liebknecht and Rosa Luxemburg were among the founders of the Communist Party of Germany which held its constituent congress from 30th December, 1918 to January 1, 1919.
After the suppression of the Berlin workers' uprising of January 1919, the ruling classes organised the brutal killings of the two communists on 15th January 1919. The roots of the murders lay in the secret accommodation reached between the right-wing socialist leader Chancellor Friedrich Ebert and General Groener which was established in November, 1918 'in order to prevent the spread of terroristic Bolshevism in Germany'. Bourgeois and socialist organs competed to hunt down the two revolutionaries. The spy office of the Reichstag Regiment founded by the Social-Democratic Party set a bounty of 100,000 marks on the heads of Liebknecht and Luxemburg.
On the 13th January, 1919 two days before the murders the Social-Democratic Party paper Vorwärts carried a poem calling for the assassination of the two communists.The last verse of this ended:

It was not without foundation that John Heartfield was to craft the photomontage entitled 'Fraternal greetings of the SDP' in which the deathhead of Karl Liebknecht was depicted below the masthead of the SDP paper Vorwärts which was shown dripping with blood.
Source: Revolutionary Democracy