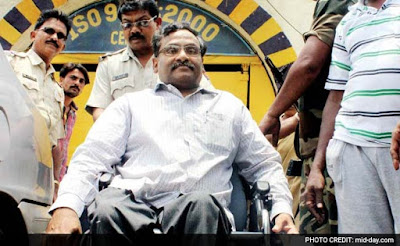 Professor GN Saibaba, who was sent back to jail on December 25 after the Nagpur bench of the Bombay High Court cancelled his bail, has sent a four-page hand-written letter to the principal judge of the Gadchiroli district and sessions courts, seeking treatment and dietary requirements on the ground that his health is fast deteriorating.

The wheelchair-bound Saibaba, who is 90 per cent disabled, was arrested in May 2014 by the Maharashtra police in Delhi. The Delhi University English professor was granted bail on medical grounds, but this was cancelled on December 23.

His letter, dated January 5, says: "I have been suffering from multiple ailments of severe nature and have been taking regular treatment at the Indian Spinal Injuries Centre (ISIC), New Delhi, for my left shoulder, which was damaged seriously in prison."

Investigations at CIIMS, Nagpur, initially and later at Fortis Hospital and the ISIC established that three muscles related to his left shoulder and the nerve system were damaged, threatening to render his left hand useless.

Saibaba says in his letter. "My present incarceration has totally stopped this treatment, which is completely detrimental for my left hand. As I am 90% disabled owing to polio, both my legs don't function. As a result; neither can I stand nor walk and I have been confined totally to a wheelchair. If I don't get my damaged left hand treated, I will have to live with one hand, which will turn my life into an impossible task."

Saibaba has requested the judge to pass necessary orders with immediate effect to send him for the treatment so that "the danger to my life is thwarted."

He has also requested for a few minimal facilities till the time he is shifted to a hospital, including five helpers to help him with his daily chores.

Saibaba suffers from a serious heart condition and had a history of falling unconscious in the 14 months period he was in this prison. The walls of his heart have been thickened, rendering his heart inflexible to pump blood.

In this context, he has requested for regular checks of his blood pressure till he is shifted to a hospital. He also has issues with his kidney, urinary tract, gall bladder and bowel, which do not allow him to eat prison food.

Among the things he has requested:

1. Jail mulakat with my lawyers, friends and relatives inside the prison and not at the iron-grilled curtain as I cannot approach the grill and talk to anyone from my wheelchair.

2. Five helpers to take turns and take care of me to go to toilet, to take bath, to eat, to wash clothes and in fact to enable me to do every daily chore as I cannot do any of these on my own.

3. To provide me with fruits, dry fruits and other food. To continue with 440 ml milk, bread, eggs and tur dal without spice, mirch powder, etc.

4. As my muscles are damaged, I need hot water to take a hot pack and also to take a bath. Kindly also order the jail authorities to continue with this as well."

From classroom to prison

The state of Maharashtra, whose police picked up Saibaba on the afternoon of May 9, 2014 from the University campus, has charged the civil rights activist under the Unlawful Activities (Prevention) Act (UAPA) for alleged Maoist links.

When he was first arrested, Saibaba was taken to Aheri, in Maharashtra's Gadchiroli district, and eventually to the Nagpur Central Jail where he was lodged until June 2015, when he managed interim bail for medical treatment. When the trial started on October 27, 2015, at the Gadchiroli Sessions Court, all the co-accused got bail except Saibaba.

The bail order was cancelled on December 23, 2015, and on December 25, when his neighbours celebrated Christmas and prepared for the customary yearend party, Saibaba and his brother boarded a flight - tickets bought at the last moment at exorbitant price - to Nagpur.

"Do not lose hope, I fought for the poor, did no wrong," were his last words to his wife Vasantha, who held her husband's hand firmly. Within four hours, Saibaba was back in the Anda cell, an egg-shaped enclosure with little light or air, with some blank papers, a plastic body pen, books on poetry and civil rights and loads of fettered inmates in neighbouring cells, watched by abusive prison guards.

At home, Vasantha and her daughter are supported by members of a defence committee set up by friends of the professors, some lawyers and civil rights activists. They live on frugal meals, allegedly because Saibaba's R62,000 monthly salary was halved by his college under instructions from the University authorities, who pushed the family out of the campus after the police came calling in the heat of May 2014.

"The establishment had issues with his work in the civil society," says Vasantha. "He was a marked man, a man causing trouble for the state, for his active participation to highlight Operation Greenhunt (under which paramilitary forces were sent to fight the Maoists in the jungles of Chhattisgarh, Orissa Andhra and Maharashtra and which critics dubbed a government-backed ploy to clear tribal land for mining) that caused damage to Indian government's reputation and its ability to bring in foreign investors," says Vasantha, sitting at a table next to a small kitchen at the family's rented home.

The couple's daughter, a BA (English) second year student, standing close, says she is proud of her father, and has written two letters to him to offer courage and help. Saibaba's mother, a frail woman in her 70s, walks out of the kitchen, holding her daughter-in-law and granddaughter, saying in broken Telugu: "No one can kill my son, he has blessings from the Gods".

"My father is my hero, he sided with the poor and fought the rich who rendered the tribals homeless. He is my inspiration," says the daughter.

But the Maharashtra government says it has a strong case against Saibaba who, they claim, was in regular touch with the guerrillas, even complaining he was not getting enough work to fight the state.

"This is a case of worse human rights violation, he has a strong case. He was denied bail while he was being treated at a hospital (for spinal injuries). We have a strong case," says Prashant Bhushan, one of India's top lawyers who, along with Kamini Jaiswal, another lawyer and human rights activist, has offered to argue the case.

The family has both legal and moral support from Rebecca John, the intrepid lawyer known for handling some of India's most sensitive case, including the one involving the Talwar family whose daughter, Arushi, was found murdered.

Saibaba's friends are also trying hard to create a nationwide awareness. There is an online campaign on the Facebook and a Twitter handle operated by Committee of Justice for Saibaba. But that's still falling short in the maze of India's 350-plus news channels and their breathtaking breaking news.

"We are trying, trying hard. A professor is meant to be aware of ills of the society and highlight them to his students and others. That's what Saibaba did. How can he be an enemy of the state?" asks Hany Babu, an English professor and Saibaba's schoolmate.

Rakesh Ranjan, another professor and sympathiser, says keeping Saibaba in jail will send a wrong message across India. "This means death of dissent, which is bad for any democracy.
Saibaba is 90 percent disabled, he is a professor, not a threat to the society. He needs to be treated with honour."

But a senior Home Ministry official said the move could be just the proverbial drop in the water because on issues involving national security (in this case the Maoist rebels), politicians rarely budge unless there is a global outcry (as it happened in the case of Dr Binayak Sen).

"No one will budge, its about the state fighting disruptors of the system," said the official, requesting anonymity.

In the faraway Nagpur jail, Saibaba lives in hope. His first 14 months spent in jail were like life in hell, he was dragged by the hands to his cell by guards, rupturing his nerves from neck to left shoulder and rendering his left hand immobile. Will he be able to save that hand? The ball is now in the Gadchiroli principal judge's court
Posted by nickglais on 1/13/2016 03:59:00 AM