INDIA: TRENDS WITHIN THE COMMUNIST REVOLUTIONARY CAMP IN PUNJAB BY HARSH THAKOR 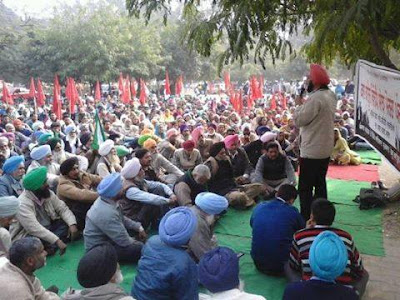 
On my recent visit last December I met several representatives of the peasant organizations led by the Communist revolutionary camp and democrats in Punjab.

There are a huge range of views on the mode of production and trends.

In the view of Comrade Darshan Pal,who now leads the B.K.U(Dakaunda) the movement is stagnating towards economism.

He feels Punjab has reached the capitalist mode of production .He gave the example of agricultural labourers using machinery .Comrade Satnam stated how so many landless peasants became agricultural workers and thus the semi-feudal thesis was irrelevant.

Although rating the movement led by C.P.I.(M.L.) New Democracy to be the largest he felt that economist tendencies were prevalent.

He complemented the N.D.group more than any other one with work in Punjab students union and Naujwan Bharat Sabha.

Darshan Pal felt that the farmers movement was neglecting burning political issues of the day like nationality or minority question .

He also felt that the demand for a plot of land to every farmer should be raised .

He felt that the youth should be mobilized on political issues.

He felt that every group in the Communist revolutionary camp of Punjab displayed economist tendency,including his.Nazar Singh Boparai of Surk Rekha felt that the agenda of armed struggle was not raised and the movement of agricultural labourers was lagging behind.

He was critical of forces like the Punjab Khet Mazdur union and B.K.U(Ugrahan) who to him were not building an agrarian revolutionary movement.

The C.P.I.(M.L.) New Democracy was critical of the same organizations for tailing the demands of rich peasantry.

All of them felt that the Communist Party Re-Organization Centre of India(Marxist-Leninist) or C.P.R.C.I.(M.L.) was practising economism,particularly Satnam

However Darshal Pal stressed that the rural peasantry had to be organized and the European classical capitalist model could not be applied.

He was critical of the Rahul Foundation group that virtually negated the role of the peasantry on grounds of 'capitalist 'development.

I later interviewed leaders of the Punjab Khet Mazdoor Union and met the editor of Surkh Leeh,(formally Surkh Rekha)Jaspal JassI and it's former editor Amolak Singh.

They refuted that the movement was veering towards economism and defended it's positive aspects.They all felt that great progress had been made and the mass-political orientation and practice was generally correct.

From discussing with them i could more accurately throw light on the ground reality of Punjab where semi-feudal relations are still prevalent.

Jassi explained me that the first people to voice the need of the creation of separate organizations for the landed and landless peasantry were the Ugrhan and P.K.M.U forces.

The organized struggles of landless peasntry for plots could take place only because of the support of the B.K.U.(Ugrahan)

The succesful boycott of ruling class agents of landless peasants occurred because of the support of the B.K.U.Jassi explained how the Surkh Leeh(formally Surkh Rekha) was not mass paper of the C.P.R.C.I.(M.L. )any communist revolutionary group specifically nor were mass organizations like Punjab Khet Mazdur union or B.K.U (Ugrahan ) front organizations of any naxalite group.

He praised the unity of the mass democratic forces led by the genuine communist revolutionary camp like when holding commemoration programmes for the late cultural revolutionary playwright Gursharan Singh and for upholding the playwright Ajmer Singh Aulkah.

Jassi felt there could be a time when all the communist revolutionary groups had a joint paper like Surkh Leeh.Amolak explained the subjective situation that existed in Punjab with the peasantry still not ready for land seizures .

He praised the May day programme held annually in Ludhiana of Industrial workers which went towards building unity.Zora Singh Nazrali explained how semi-feudal relations were stil prevalent and how only bu unity of the landed and landless peasantry could demands be won

He also stated that all the leaders of the B.K.U(Ugrahan) came from poor peasnt and not rich peasant families.Laxman Singh Sewewala explained how class perspective had to be applied and everything could not be organized around caste demands

He stated that casteism existed and had to be redressed but the general demands of landed peasantry had to be fought for.

Sewewala stated that fighting for the demand of plots and a panchayat was absolutely essential to build a movement at grassroots.

He elaborated the successful struggles for plots and panchayat and refuted the criticism of tailism and economism of P.M.K.U. 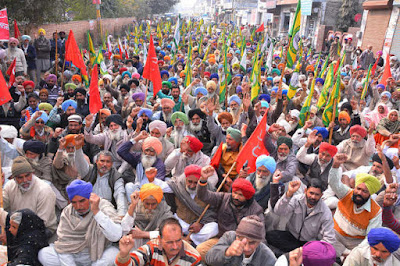 He explained how demands of landed and landless peasantry were of such variance with eack other and how hard it was to bridge that gap.In some issues there would be severe contradictions.

Pavel Kussa of Naujwan Bhart Sabha felt the issue was complex but also felt that the peasant movement was building on progressive lines with question of caste organization a complex issue.

He elaborated the recent struggles of Naujwan Bharat Sabha on issues of Communalism on a district basis particularly in Malwa which had a great response.

He also stated how much moral support the N.B.S gave to the struggles of the peasant organizations and how many youth joined the P.M.K.U or the B.K.U.Sikh communal ideology was refuted by N.B.S.The leaders of P.M.K.U,,B.K.U(Ugrahan) and N.B.S vociferously criticised Nazar Singh Boparai's attack on the original line of Surkh Rekha and tooth and nail defended it's contribution.

Nazar Singh launched an ideological attack on the line of former Surkh Rekha and accused the C.P.R.C.I.(M.L.) of capitulationisim and degeneration.

In fact leaders and contingents of revolutionary mass organizations like Sewewala,Joginder Singh Ugrahan,Zora Singh Nazrali,Sukhdev Singh Khokri all stood by Surkh Leeh (formally Surk Rekha and vociferously attacked Nazar Singh Boparai's running down of the former Surkh Rekha.Boparai being the technical owner persisted with continuing the magazine and thus the earlier 'Surkh Rekha' had to change it's name to 'Surkh Leeh.'

I still salute their grass root work and disagree that they are veering towards economism
Arguably nowhere have such progressive open struggles occurred in the entire country.

The last rally in Rai ke kalan village in Bhatinda is a testimony to this.They oppose 'boycott of elections ' in the present scenario and participation in elections.The C.P.I.(Maoist ) cadre or supporters like Balwant Makhu too praised them stating they practiced revolution line better than organizations of C.P.I.(M.L.) New Democracy.

The N.D group although classing Punjab as semi-feudal believes that the main contradiction is with the alliance of feudalism and imperialism and are placing greater emphasis on fighting imperialism.

I suggest readers read the last 2 Hindi reports of Surkh Leeh which throw light on the achievement of peasant organization sand movement in Punjab ,particularly the unity of the landless and landed peasantry.

I must say that organizations like B.K.U(Ugrahan) or P.M.K.U are not front organizations or belonging to C.P.R.C.I.(M.L.) or any Naxalite group and maintain their independent identity

Nor is Surkh Leeh a journal of any Naxalite group

.However I still applaud the role of the Communist Party Re-Organization Centre of India(Marxist-Leninist) or C.P.R.C.I.(M.L) for creating the backbone of massline in grassroots work.

On the other hand I complement the work done by forces like B.K.U.(Dakaunda) in building peasant organization nad the work of C.P.I.(M.L.) New Democracy in building a strong Punjab Students Union and Naujwan Bharat Sabha.

I disagree with their tactics of participation in elections but commend the political struggles of their youth and student front in Jalandhar Patiala,and Amritsra,

Issues like fee hike have been undertaken on a state level .

I also admire the work of Rahul foundation group on the industrial workers front in Ludhiana organizing the textile and hoisery workers with enormous dedication.

No organization has done better work on workers front.

The Rahul foundation has also done commendable work on the issue of combating communal fascism,particularly on workers front.

Meticulous work has been done by their Naujawan Bharat Sabha in inculcating political consciousness.

Some argue that Punjab is capitalist but maintain that the stage of revolution is that of New Democratic Revolution like Inquilabi Kendra and Dakaunda group.

I feel it is still semi-feudal and semi-colonial but is in the process of going capitalist.

Even if it is a New Democratic stage path of Insurrection may well replace path of protracted peoples war in Punjab.

In a classical semi-colonial ,semi-feudal scenario the practice of Punjab Khet Mazdoor Union and B.K.U(Ugrahan) is almost closest to massline,but the study of mode of production in Punjab is complex.

Still I suggest readers to get an English translation of recent booklets of journal Surkh Leeh highlighting the agricultural movement and situation.