India : A spectre will haunt the Brahmanical Academia, the spectre of Rohith Vemula! 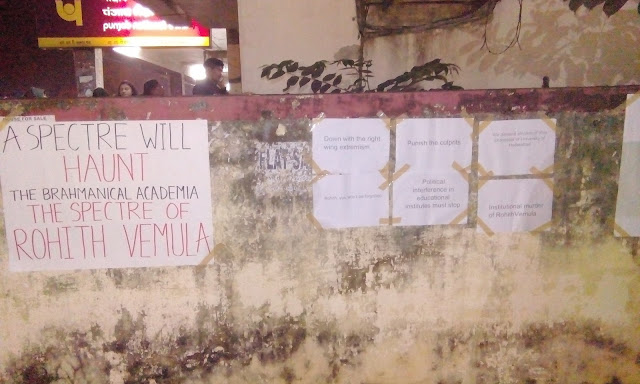 For the first time,IIT Kharagpur students demonstrated for a cause which is not limited within the campus,which though still may boast of the pride of Hijli Barracks wherein the East India Company and the British Raj kept imprisoned the freedom fighters since 1757.

IIT Kharagpur students stand united with the students and youth countrywide.It is almost a history because these students are better known for Rs Two Crore Campus recruitment and still it is the number one institution.Media would not cover the turnaround to focus the point that generation next cares for the nation and the masses and they also as Indian citizens are concerned most to ensure equality,justice,pluralism ,tolerance and peace.

Dr.Anand Teltumbde , who participated in the protest, shares the pamphlet that was distributed and the handwritten posters pasted on walls at prominent public places.

A march was conducted in which many students participated.

“The value of a man was reduced to his immediate identity and nearest possibility. To a vote. To a number. To a thing. Never was a man treated as a mind. As a glorious thing made up of star dust. In every field, in studies, in streets, in politics, and in dying and living”
– Rohith Vemula


In any ‘free’ country, protests symbolize a ‘healthy and functioning’ democracy, however under the current political dispensation, the message is bold and clear, ‘if you are not with us, you are against us’. Like Bush Junior’s famous axis of evil, the list of anti-national elements is ever expanding, anyone who voices a ‘different’ opinion.

Once you are stuck with such a label, the fascists enjoy the power of judge, jury and executioner over the hapless targets. Rohith’s case is no different than this. He had potential and a bright future ahead. He might have been someone.

Rohith Vemula was a young Dalit research scholar and student activist of the University of Hyderabad, who was among five students suspended by the administration and protesting against it.

Rohith was forced to kill himself because he did not stop at that cardinal sin of fighting for his own people.

He dared to speak for all the marginalized ones, be it the minorities, the workers or women as a leading activist of the Ambedkar Students Association (ASA).

He also protested against the capital punishment which sparked controversy between ASA and another students organization named Akhil Bhartiya Vidyarthi Parishad (ABVP).

The trouble took a sharp turn when ASA organised a protest march in August 2015 at the campus against the attack on the Montage Film Society in Delhi University by ABVP.

They were attacked for screening a documentary movie ‘Muzaffarnagar Baaqi Hai” that exposed the roles of Hindutva outfits in Muzaffarnagar riots in 2013.

Local ABVP leader Susheel Kumar who posted a comment on Facebook calling ASA members ‘goons’ alleged that about 30 students belonging to the ASA had beaten him up and he had to be hospitalized.

The University’s Proctorial Board conducted an inquiry into the allegations with a medical examination which found no proof of injuries claimed by Susheel Kumar.

But external political compulsion led to the formation of second proctorial committee which found Rohith and four others guilty of anti-national activities.

This led to the eviction of Rohith and four others from hostel, library and campus public spaces.

His stipend was also halted following this.

Despite the trouble and increasing tension on campus, while politicians prepared to fight on both sides, nobody bothered to reach out humanely to the students protesting by camping in the open.

The suicide of students on India‘s best campuses is a tragedy that we do not wish to acknowledge or recognize. We ignored it.

He did not hate anyone or wish to use his final act against anyone, including those he was fighting against. He did not find space in the campus to pursue his true love — science.

This intolerant situation forced Rohith to write “I always wanted to be a writer. A writer of science, like Carl Sagan. At last, this is the only letter I am getting to write” as he was sucked into the black-hole of mutual destruction by binaries that campus politics has become: You are either this or that, you are either with us or against us.

For the “murder-suicide”, we blame the phantom limb of caste on which the pretentious democratic credentials of the republic are superimposed.

The coward police secretly cremated Rohith’s body, increasing the suspicion that it can be more than a institutional murder.

We demand a detailed investigation and punishment of the guilty and oppose the institutional murder of Rohith Vemula.