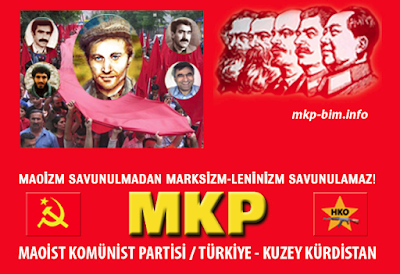 Comrades, laborers, proletarians from all over the world,

With joy we announce that our party, the Maoist Communist Party (MKP) in spite of attacks, arrests and repression has held its third Congress with success. Our 3rd Party Congress with the guideline of Marxism – Leninism – Maoism is a modest yet important step in the global revolutionary struggle. But it is also at the same time an important win for the revolutionary struggle in our country.

The decisions and the development of our 3 Congress are proof of that. We also know that there will be some who will despise this evolution of our party. But we are proceeding with the determination to develop ourselves in the revolutionary struggle.

Today, the struggle between the classes is as pointed and cruel as in the past. This cruelty is the product of the antagonistic contradictions between the classes. Statements like “The contradictions between classes are resolved” have been exposed as lies. Saber-rattling and threatening is in the character of the class enemy and is its principle. Underestimating the enemy means forget the enemy and departing the active combat. Not to fight means to run away from battle.These two attitudes contradict the spirit of the third Congress of MKP.

The MKP acts according to revolutionary principles and the slogan “political power grows out of the barrel of a gun” is the determining factor in its theory and practice. Our party has taken its place on the front lines of combat with the manifesto of 1972. Yesterday and today we fight for imperialism and all its henchmen and fascist rulers to be buried in the shadow of history.Yesterday and today we are determined and have no qualms!

On the revolutionary road we are progressing toward communism. We, the proletarian revolutionaries who are led solely by Marxist – Leninist – Maoist theory and its living spirit, “concrete analysis of the objective conditions ”
.
Comrades, laborers, proletarians,

The main enemy of the oppressed peoples and nations, first of all the U.S. imperialism and the imperialist robbers organized in blocks, drown the world proletariat, oppressed nations and peoples in blood. The power struggle between imperialists results in the everyday death or starvation of hundreds of thousands. The national powers on the imperialist leash have made ??it their mission to promote exploitation by their masters. The oppressed are exposed to death, torture and exploitation by the imperialists everyday. Because of this the fascist stooge of the imperialists will only be defeated with revolutionary struggle. We fight against this repression with the Socialist People’s War. We organize the world revolution, which also includes the revolution in Turkey-Northern Kurdistan, where we attack the weak points of imperialism.

Our party, which was founded by Ibrahim Kapakkaya and his comrades 42 years ago, has been consolidated within the classes in Turkey and Northern Kurdistan and taken its place in the struggle. The third Congress of our Party stands by its history and heritage, it looks to further develop its communist orientation as its revolutionary duty.

In this spirit, our party has determined that the social system dictated by the monopolist comprador bourgeois in Turkey-North Kurdistan is capitalist in its current development.

Starting from this socio-economic analysis, the nature of the revolution, strategy, and other fundamental points in the party’s program has changed. .

After 42 years of struggle our party has changed its strategy and tactics in its Third Congress in order to remain true to MLM ideology. The changes in the program, our third Congress brings with it does not mean that the ideological-political correctness of Ibrahim Kaypakkaya or of Comrade Mao Tse-Tung is called into question.

It does not in any way alter that. On the contrary, it applied the “concrete analysis of the objective conditions” to the the present time [......]

The third Congress of our party assesses the socio-economic conditions in Turkey as capitalist.

Consequently, the nature of the revolution is a proletarian socialist revolution.

Consequently, the strategy of revolution, is socialist people’s war.

Our 3rd Congress has also decided that the armed struggle still remains valid.

In addition to the guerrilla units of the People’s Liberation Army – Halk Kurtulus ordusu (HKO) the other armed wing of the party is the People’s Guerrilla Forces – Partizan Halk Gücleri (PHG) in the cities.

With the slogan “women in power, women in the lead” our party has made a positive step forward on the women question […..]