KURDISH LEADER BAYIK: WE ARE NEITHER ON AMERICA NOR RUSSIA'S SIDE 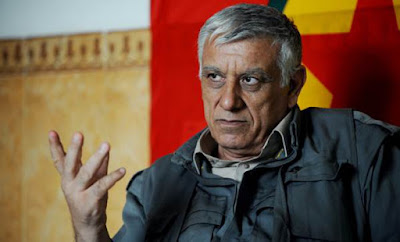 A summary of Bayik's comments are below:

What America is trying to do is not clear. Turkey's plans are clear; they want to suffocate the Rojva revolution and stop international support for it.

There are contradictions between America and Turkey. If they agree on a joint operation (on Jarablus) then we will escalate the struggle in Turkey.

The Kurds in Rojava and the Syrian Democratic Forces aligned with them will also escalate the struggle in Rojava.

We are neither on America nor Russia's side. We are a third force there, we represent a third line. When I say 'we' I mean the Kurds in Rojava. What did they say?

They said whoever recognises our status we will recognise them and form an alliance.

Therefore the Kurds there cannot be on the side of America or Russia.

There is a relationship. Whoever wants to fight ISIS (Daesh) we will fight with them.

Nobody can approach the Kurds in a tactical way anymore.

That era is over.

Only those who develop a strategic partnership with Kurds can win. Those that think they can develop a tactical relationship and use the Kurds because they are good fighters and further their economic and military interests will make a mistake.