Turkey : Cornerstones of the Left from Yuruyus (March) Magazine - translated by Steve Kaczynski 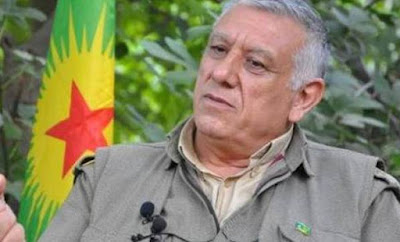 "Cornerstones of the left

YURUYUS: "THE HDP IS A PROJECT OF THE KURDISH NATIONALIST MOVEMENT WHICH IS ENTERING THE SYSTEM TO DRAW THE LEFT INTO THE SYSTEM WITH IT" (Yuruyus, June 29, 2014)

CEMIL BAYIK: Turkey for years has struggled with the Kurds and the left. But it could not find a solution somehow. But leader Apo, the PKK, brought all these forces said to be illegal into parliament."

The joint chair of the KCK (Group of Communities in Kurdistan) Cemil Bayik, confessed the truth of something we have long maintained in an interview with the BBC on November 30, 2015.

BBC Turkce (BBC's Turkish-language satellite channel): Do you not think that you share at all in creating the environment for an intensification of the fighting?

We carried all Turkey's problems to parliament. We put all these problems on the agenda of parliament, we sought a solution.

Turkey for years has struggled with the Kurds and the left. But it could not find a solution somehow. But leader Apo, the PKK, brought all these forces said to be illegal into parliament." (BBC Turkce, Mahmut Hamsici, November 30, 2015)

What KCK joint chair Cemil Bayik has admitted to is quite clear. He said that "the illegal left organisations that the state for years was not able to finish off were brought within the system by leader Apo by means of the HDP".

How did the Kurdish nationalist movement do this? With the HDP...

When the HDP was founded, there was no mission that the Kurdish nationalist movement and the reformist, opportunist left did not attribute to it.

The HDP would secure the unity of the whole left. It would organise the joint struggle of the Kurdish and Turkish peoples. It would present the alternative of socialism to capitalism. It would bring life to the inheritance left by Mahir and Deniz to the revolutionary movement in Turkey... They said that supporting Mahir and Deniz meant supporting the HDP... And those who did not support it and criticised it were declared to be jash  (Kurdish word meaning "traitor").

Since the discussions of a "roof party" (literal translation: could also be rendered as "umbrella organisation") started, we stayed outside of it.

We said it was not a unity that met the needs of the people or boosted the struggle, it was a unity by the Kurdish nationalist movement that sought to bring the revolutionary left from Turkey towards conciliation with the system and to liquidate it.

During the Halklarin Demokratik Kongresi (HDK, Democratic Congress of the Peoples) foundation period we expressed our criticisms on this basis and said we would not be participating.

What Cemil Bayik has admitted to has proved once again that we were right.

The left, that lacks confidence in itself and is without personality is to be made an auxiliary to its own nationalist, conciliatory and capitulationist politics. And the truth is that it has had a number of successes on this score...

The HDP project of the Kurdish nationalist movement is not about increasing the anger of the people or the struggle against the fascist system, it is a projected aimed at making the people's struggle suitable to be drawn inside the system, and to reach conciliation with the system...

We will not support any policy that seeks conciliation with the system and does not develop the struggle..."

In the June 29, 2014 issue of Yuruyus, no.423, the article headlined "EMEP decided not to join the HDP" - "HDK-HDP is not what the struggle of the people needs, it is what the Kurdish nationalist movement needs.

The HDP is the Kurdish nationalist movement's project to pull the left with it while it  moves inside the system." EMEP had declared that it would not join the HDP.

"It can be deduced that the HDP 'ground for alliance' is a way of reorganising itself as a mass party with a particular ideological approach." (Evrensel, June 18, 2014)

That is, the existing political identities of the HDP's component parts are to be abandoned and under the roof of the HDP there is to be a reorganisation with what is said to be a "new ideology". The "new ideology" is undoubtedly the ideology of the Kurdish nationalist movement.

In the same article it was said that a message to the 2nd Extraordinary Congress of the HDP maintained that the HDP project was "the biggest political development since the TIP".

"The peoples of Turkey will see in their lives how this development will be realised politically. However, we had said this already in establishing the HDK.

Talking of a "roof party" while putting this project forward, Abdullah Ocalan put it forward as a project for the Kurdish nationalist movement to reach conciliation with the system.

So this project is at the same time one of getting the left to be an auxiliary for the Kurdish nationalist movement as it enters the system, and is also a means of eroding it and putting an end to it while it is under the same roof...

We had said this during the period that the roof party was being created...

What EMEP said and its reasons expressed for not entering the HDP were what we too said at the time.

And  because of what we said the Kurdish nationalist movement resorted to every form of attack on us, with lynch attacks, setting fire to our institutions, arson attacks using Molotov cocktails, and attempts to obstruct Grup Yorum concerts.

In the April 19, 2015 Yuruyus magazine no.465 we had published what bargains and aims were behind the HDP, in the article entitled "The HDP is a project to make the revolutionary left an auxiliary of the system!

We will step up the struggle against conciliation, liquidation and making the hopes of the people dependent on parliament.

Fascism must be fought without any attempts at conciliation!

The solution lies not in the parliament of the oligarchy but in revolution!

Let us unite in the Revolutionary Front!". The protocol of the HDP visit to Ocalan stated the following:

"OCALAN: We are using this process to create an opening for the left... It is necessary to legalise it. Because the bourgeoisie pressed us hard we had to choose illegality. Otherwise legality is normal. With the call from parliament that will be made, the left will also be legalised."

WHAT IS OCALAN SAYING?

"It is necessary to legalise it." Why? Because bargaining with the oligarchy is underway. If organisations that defend the revolutionary, illegal struggle do not "go legal", that is, make a turn towards the system, it will also not be possible for the Kurdish nationalist movement to make a turn to the system.

Ocalan is saying that in order to further bargaining with the state an appeal will be made from parliament calling on the illegal left to go legal...

And if it is not enough for the left to turn to the system, a mission to transform it into a "system left" is also being carved out for it. Ocalan continues:

"The AKP is conservative, the others are nationalist. There is a huge opening between them. The left can fill it. (From the protocol of the BDP delegation to Ocalan, dated April 3, 2013.)

"OCALAN: Apo wants to move together with you. The Ankara conference is historic. We will lay down the basis of politics. The state will not be able to do what it did to those like Mustafa Suphi.

Weapons will fall silent, democratic politics will do the talking. The prime minister said this. There can be no going back. If there is, there will be an uprising and all hell will break loose."

Here Ocalan is saying that while the Kurdish nationalist movement is liquidating its armed struggle, to the DHKP-C which persists in armed struggle he remarks of the state that it will not be able to do what it did to people like Mustafa Suphi, he is saying, enough, give up your weapons...

"That is the situation of the CHP. It is an opportunity for the left, there are three blocs: an AKP bloc, an MHP-CHP bloc and a bloc of labourers and socialists. Aim for this, form this... I talked to a delegation (refers to a delegation from MIT, National Intelligence Organisation [Turkey's state security service] so a decision on pulling the left into the system was taken in talks with the MIT) without the left this cannot be done. They have to be persuaded. So I am also thinking of their security here. I am guaranteeing it. This means henceforth there will be no plots against the left. (...) thus far, the left has been dying and I am working to guarantee its security (April 14, 2013, BDP visit to Ocalan in Imrali)


Ocalan says it is not possible for the PKK to disarm without the revolutionary socialist left being drawn into the system... This is essentially the same viewpoint as that of imperialism and the oligarchy.

And Ocalan presents a very "sublime" thought as regards this duty: "The left has been dying and I am working to guarantee its security," he says.

So Ocalan has been dealing with the left's "security of life".

How is he doing this? By creating a left that the system doesn't feel it wants to kill...

He is trying to show that the armed struggle is past its sell-by date and the only solution is parliament.

Indeed in the June 7 parliamentary election, the oligarchy's parliament was presented to the sections of the people opposed to the system as being the only alternative.

No step was omitted to make them accept the system. Before the June elections, to get the votes of the left, left-wing phrases were constantly in their mouths, the writers for the bourgeois press acted as advisers. They wrote jokes for them as well as speeches and because of their "talents" the politicians most often seen in the bourgeois media were HDP joint chair Selahattin Demirtas and Figen Yuksekdag...

After the elections they said, "We have no red lines" and tried to find solutions to the system's crisis. They embraced the chairs of TUSIAD, MUSIAD and TOBB (translator's note: capitalist institutions in Turkey) and scattered flowers before them.

But despite the left's fossilised turncoats becoming a reserve force for the HDP, and despite it winning 80 seats and entering parliament, it could not be a solution to the oligarchy's crisis.

Now Cemil Bayik in his BBC interview is trying to give the imperialists and the collaborationist AKP "confidence" by saying that "we played no part in starting the clashes" and to prove this,  says that "if we were persistently on the side of war, we would would not have tried to bring the Kurdish people, the left of Turkey and all opposition forces together under the umbrella of the HDP and we would not have brought them to parliament."

So the whole of the (reformist and opportunist) left is in their hands: Bayik says it does what we want. We established the party for you, we got into parliament. We showed that the only place where a solution could be found was in the system's parliament... Re the Kurdish people and the left which the state for years called terrorist, "leader Apo, the PKK brought all these forces considered illegal into parliament."

While Bayik talks about how the Kurdish people and the left were drawn into the system by means of parliament, and tries to prove his commitment to conciliation, the AKP continues to declare one district after another in Kurdistan to be security areas and commits dozens of massacres.