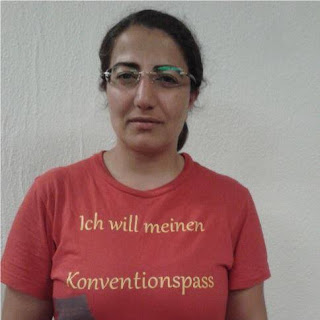 Despite a decision by its own courts on October 27, the Austrian state has confiscated Evin Timtik's passport!

This is bourgeois democracy, this is the democratic face of Europe!

If you are within the frontiers of bourgeois democracy, every kind of thought can be spoken and published. As a good "citizen" your rights are protected.

But if it is contrary to the interests of the European Union or you defend thoughts that are an alternative to the policies of its states, concepts of rights and freedoms give way to "security concerns".

If you are a revolutionary or socialist, you have no basic rights in European Union countries. And all your rights are endangered.

Evin Timtik was targeted in Turkey for being a revolutionary and because her life was in danger she went to Austria in 2009.

Since 2010 she has spent five years with right to remain status in Austria. At the end of these five years she made a new application to remain on March 4, 2015. For a time the Austrian state engaged in chicanery as regards Evin's case.

But in the end it made a confession: "Because you threaten the internal and external security of Germany your application is rejected."

What is the excuse for this? There is none. Is there a concrete allegation? No. Evin's lawyers have sought to find out why there is a "threat", and why such a decision was reached, but the reply they received was that it was an Interior Ministry file and on grounds of secrecy it could not be released, they said. So they could not explain what danger there was to the security of the German state.

Germany is the gendarme of the European Union.

Grup Yorum (a revolutionary music group from Turkey) artists are given Schengen visas by embassies, but Germany does not accept them, saying that "you threaten the security of Germany", so these revolutionary musicians cannot enter Germany.

After a concert was held despite these obstacles the authorities were so indignant about it that they raided the homes of the organisers using police armed with assault rifles, on the pretext that they had "failed to pay tax".

To destroy a revolutionary they held him for seven years for an act alleged to have been committed in Turkey in 1991. The Yuruyus magazine, which is not even banned in Turkey, was banned by the German Interior Ministry.

Now the Austrian state which is playing the role of a servant has confiscated the passport of Evin Timtik.

We know very well the true face of German imperialism and bourgeois democracy.

The bourgeoisie is hypocritical, fake and mendacious.

While for appearances it plays the democracy game, thoughts it thinks are not dangerous are freely expressed but when they feel they themselves are endangered their faces can change in a moment.

After the ISIS attacks the Belgian Interior Ministry stated quite plainly: "All houses in the Molenbeek district where North Africans live will be searched one by one." Their democracies are just a decoration to deceive the peoples.

The moment their systems go into crisis they forget they are supposed to be democracies.

As a revolutionary, Evin Timtik struggles against this corrupt system. Her rights were taken away, her passport unjustly confiscated and her freedom to travel obstructed. 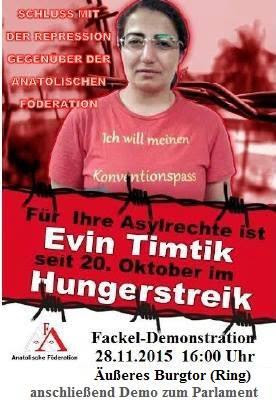 The Austrian state itself has resorted to illegality and taken away her basic rights. Having no alternative, she set up a resistance tent and started an unlimited hunger strike for her rights, and is now in the 53rd day.

We as members of the Anti-Imperialist Front in the capacity of political institutions and individuals declare that we are behind Evin Timtik and we will will resist alongside her until she regains her rights.

The right to claim asylum is not a right that was benevolently granted, it was won by the world's peoples with blood and sacrifice, and it cannot be taken away! Down with imperialism, long live our struggle!