Its administrative center was in Lachin. It was briefly succeeded by the Kurdistan Okrug in 1930 from May 30 to July 23.

The uyezd was established on July 7, 1923. The majority of Kurds in the region were Shi'a, unlike the Sunni Kurds of Nakhichevansky Uyezd and other areas of the Middle East.

At the 1926 Soviet Census, the uyezd had a total population of 51,426 people, with ethnic Kurds constituting 72.3% or 37,182 people. According to the same census, 92.5% of the population of the uyezd cited Turkic (Azerbaijani) language as their native tongue.

On May 30, 1930, Kurdistan Okrug was founded in its place. The okrug included the territory of former uyezd and also entire Zangilansky District and a part of Dzhebrailsky District. 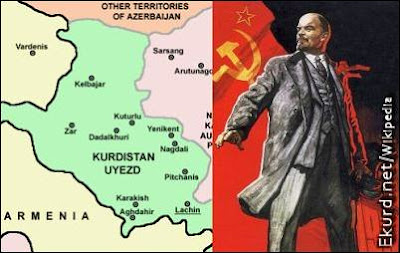 The okrug was created by the Soviet authorities in order to attract the sympathies of Kurds in neighboring Iran and Turkey and take advantage of Kurdish movements in those countries.

However, due to the protests of Soviet Ministry of Foreign Affairs, which was concerned that open support of Kurdish movement could damage relations with Turkey and Iran, the okrug was liquidated on July 23, 1930.

In the late 1930s, Soviet authorities deported most of the Kurdish population of Azerbaijan and Armenia to Kazakhstan.

Starting from 1961, there were efforts by the deportees for the restoration of their rights, spearheaded by Mehmet Babayev who lived in Baku, which proved to be futile.

In 1992, after the capture of Lachin by Armenian forces during the Nagorno-Karabakh War, the Lachin Kurdish Republic was declared in Armenia by a group of Kurds led by Wekîl Mustafayev.

However, since most of the area's Kurdish population had fled along with the ethnic Azerbaijani and had found refuge in other regions of Azerbaijan, this attempt failed. Mustafayev later took refuge in Italy