India : Salute Insurrection of Punjab Peasantry Turning A Candelight into a Bonfire by Harsh Thakor 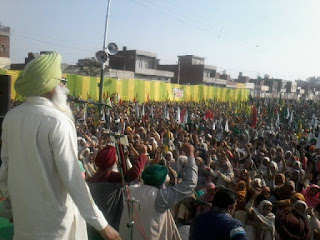 This article expresses the personal views of Harsh Thakor

I have witnessed and one of the most significant peasant movements literally a spark turned into a Prairie fire.

Such a rally combated the wrath and apathy of the state in Punjab insensitive to peasant suicides and demands.

Such organized resistance from various trends within the Communist revolutionary camp and independent organization are of  great significance.

I spoke to the sectary of the P.M.K.U.,Laxman Singh Sewewala who refuted the allegation made by groups that the landless peasant organization was trailing behind the demands of the rich peasants.

True one organization was not built of the landed and landless peasantry but still the gap was being bridged.

He stated that the demands of landed peasantry and agricultural landless labourer were so different and the situation does not arise today when land seizures can take place. 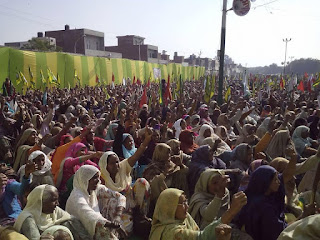 Struggles for plots are still of vital importance in his view and class analysis has to be given greater importance than caste.

FILMAKER MATHEW FILMED THE EVENT WHO IS FROM CANADA IT WAS ONE OF THE MOST SPECTACULAR PEASANT RALLIES EVER IN PUNJAB CONSTITUTING 35,000 PEOPLE.

THE LOOK OF WRATH COULD BE SHOWN ON THE PEASNTRY.15,000 CONSTITUTED THE B.K.U(UGARHAN) AND ABOUT 10,000 CONSISTED OF THE B.K.U.DAKAUNDA.8 PEASANT ORGANIZATIONS PARTICIPATED INCLUDING THE P.M.K.U ,AN ORGANIZATION OF AGRICULTURAL LABOURERS

I REALLY WISH THIS EVENT WAS BROADCAST WORLD OVER.

Sewewala explained me that the allegation made by forces like C.P.I.(M.L.) New Democracy that the P.M.K.U was supporting rich peasants demands was incorrect.

Do read earlier articles on the Punjab Khet Mazdoor Union.

I was greatly impressed by the peasant organizations.

It is a tribute to the painstaking work undertaken by the BKU (Dakaunda) and Ugrahan factions and the P.M.K.U.

At the “Lalkar rally” organised by eight farmer and four farm labourer organisations in support of their demands at the grain market here today, they announced to organise a “pucca morcha” from January 6 to January 8 at Badal village — the native village of Chief Minister Parkash Singh Badal.

They said if their demands are not met before January 6, they would gather at the Badal village.
Thousands of farmers and labourers took part in the rally.

The leaders further said the state government was also not paying Rs 20,000 per family as compensation to farm labourers who could not get employment due to damage to the cotton crop by whitefly.

They said farmers had also been “looted” as they had sold basmati at a rate of Rs 1,500 per quintal and the same crop was now being purchased by traders at high rates. They also termed the “Prevention of Damage to Public and Private Property Act” as a “black law”.

They want full compensation to farmers whose crop got damaged due to whitefly and the pesticide scam, Rs 20,000 per family compensation to farm labourers, scrapping of Prevention of Damage to Public and Private Property Act, release of dues worth Rs 134 crore to sugarcane growers, waiver of loans and Rs 5 lakh compensation to the family of every farmer who had committed suicide. 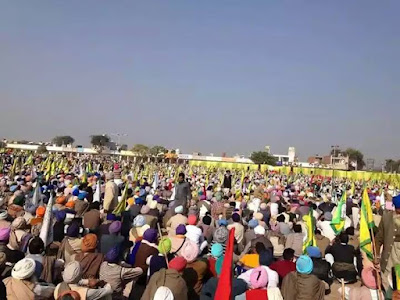 A very important study in Punjab is on mode of production and whether the agricultural labourers organizations are just capitulating to demands of rich peasants.

I spoke also to a spokesman of Surkh Rekah who explained the positive gains of landless labourer and landed peasantry uniting - although a common organization has not been set up.

He even stated that the youth organization has made positive developments through integrating with peasant struggle.

Many organizations are participating and it is very important towards democratic rights.