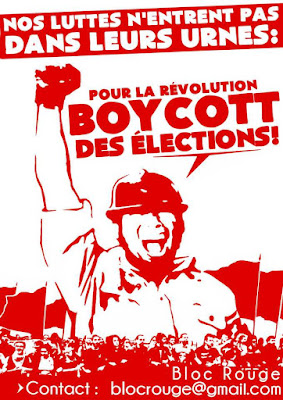 WHAT THE FIRST ROUND OF REGIONAL ELECTIONS SHOWS

The first observation is that the rate of abstention, blank and spoiled ballots, exceeds 50%, which shows that half of the population in France is not interested in elections,no longer believes in promises which never come to pass and think that elections are useless. This rate of abstention shows that the population, shocked by the attacks, is still not ready to support the policies of the left government, anymore than the right. The call for national unity behind the bourgeoisie is disintegrating.

The second observation shows the rise of the FN throughout the country, it has become the first party in France in the electoral rankings (about 30% of the votes cast, 13.5% of registered voters). The FN ranks first in 6 regions. In Ile de France, the most populated region, the FN exceeds 20% in 8 worker cities and reaches 30% in Tremblay and Livry-Gargan.

The third observation shows the decline in the PS which is leading in only three regions and in the colonies: Guadeloupe, Martinique, French Guiana, Réunion, where separatists and the left are in the lead, and where FN is almost nonexistent. There is also the decline of Europe Ecologie – Les Verts who have only 6.81%, even if the COP21 is going on. The Front de Gauche has tumbled to 4.15%. The right is leading in 4 regions, and is itself in decline.

The PS has decided to withdraw, for the benefit of the right in three regions (PACA, NORD / PAS DE CALAIS, ALSACE). In this last region, the leader refused to obey orders and continued. As for the Republicans, the party rejects any withdrawal or merger.

The policies of right and left are responsible for the rise of the FN. Measures taken by the government dug the bed of fascism, and even took up some of the theses of the FN on immigration, violence, and terrorism.

The police and military apparatus of the state has been strengthened. The second round of regional elections will not change the drift of the right and the left, their decline will continue along with the rise of the Front National and of racism.

ELECTIONS ARE A FALSE SOLUTION TO ESTABLISH SOCIAL JUSTICE !

Bourgeois democracy and fascism are two forms of government used by the bourgeoisie to maintain its dictatorship over the proletariat, the extortion of the surplus value that produces financial capital which dominates all production through the ever more powerful monopolies which export their capital, shifting production to the countries where the cost of labor is most advantageous, laying off millions of workers, ruining tens of thousands of small employers who fall into the proletariat.
The bourgeoisie adopts a state apparatus, a superstructure to maintain its dictatorship.

Gradually as the crisis intensifies, the bourgeoisie can no longer govern as before. The crisis mainly affects the working class but also affects the petty bourgeoisie. “The lower middle class, the small manufacturer, the shopkeeper, the artisan, the peasant, all these fight against the bourgeoisie, to save from extinction their existence as fractions of the middle class. They are therefore not revolutionary, but conservative.

Nay more, they are reactionary, for they try to roll back the wheel of history. If by chance, they are revolutionary, they are only so in view of their impending transfer into the proletariat; they thus defend not their present, but their future interests, they desert their own standpoint to place themselves at that of the proletariat.” (Karl Marx, Friedrich Engels – Manifesto of the Communist Party)

These threatened classes and even a part of the proletariat can follow the reactionary,the fascist party.

You can not fight the rise of fascism, without fighting the bourgeois parties and their reactionary measures that till the ground for fascism.

Elections under capitalism are the way to bring to power one or another of the factions of the bourgeoisie.

To spread the illusion that elections can force the bourgeoisie to give up the maintenance of its rate of profit is only maintaining and extending the capitalist system and worsening the living conditions of the proletariat and the masses.

The FN, meanwhile, takes an “anti-system” posture, the side of the “forgotten”. In reality, the fascist party program is not to struggle against the capitalist system, but to strengthen the dictatorship of the bourgeoisie, strengthen the dictatorship of finance capital, to divide the proletariat by spreading reactionary ideas, racist, sexist, nationalist , chauvinistic, “superior civilization”, traditions, etc., through the media, education, school, etc., based on prejudices that exist within the people …
But it is not enough to boycott the elections.

The only solution, as we say, “Is the Revolution.” The bourgeoisie has the means to maintain its dictatorship through the state, including the most brutal force if necessary. We must therefore attack this state,mobilize to fight against the dictatorship of the bourgeoisie, against the State apparatus, until it is destroyed by the victory of the proletarian revolution.

Following the example of the Paris Commune, workers will be elected at all levels.

The proletarian state will introduce new laws to organize the collective economy, territorial reorganization, rationalization of production, the removal of parasitic or harmful sectors, promotion of science to serve the people, the fight against pollution by the accelerated promotion of clean alternatives, taking into account the progressive proposals, blocked and submitted today to the iron law of capitalist profit. While the education system, teaching and training will be consistent with the objective of breaking the separation between manual and intellectual work.

The progress of science, and technology can solve problems much faster and accelerate the march to worldwide communism.

But to defeat the bourgeoisie and its state apparatus, to object to its reactionary measures and fight rising fascism, we need a more powerful instrument then the one available to the bourgeoisie. We have the number: a large majority of the population of our country has an interest in a revolutionary change, the destruction of the capitalist system. We must organize. For this, we need a communist party, a party whose goal is “the comprehensive destruction of the bourgeois state apparatus ” (Karl Marx – The Civil War in France)

“[...] It was just this contact that was needed to centralize the numerous local struggles, all of the same character, into one national struggle between classes. But every class struggle is a political struggle. […] ..This organization of the proletarians into a class, and, consequently into a political party, is continually being upset again by the competition between the workers themselves. But it ever rises up again, stronger, firmer, mightier.” (The Communist Manifesto)

The first phase is defensive: economically it leads the class struggle to defend conquests or acquire new ones; ideologically it fights the propaganda of the bourgeoisie, fascism, and in the struggle against racism, discrimination of all kinds, against defeatism and reformist illusions, and in this way we consolidate the class front; culturally, through the promotion and development of people’s culture.
The fight against discrimination towards women, patriarchy and sexism is of particular importance because women have a major part in the revolutionary struggle. Women still suffer more oppression than men; the women workers are those who have the most to gain from the revolution.

Building a broad anti-capitalist/anti-fascist people’s front is necessary not only to develop popular unity for the revolution but also to defend ourselves against repression and fascist and racist attacks.
The question of defense is a key issue because the bourgeoisie will never yield power voluntarily. We must protect our struggles, our strikes and events in a first phase and then gradually regain the advantage over the bourgeoisie, oppose its state apparatus with the goal of seizing power, respond to reactionary violence with revolutionary violence. Not to do this is to go over to political defeat or collapse, it allows to the counter-revolution to establish itself.

The three instruments, the party, the front,and the combatant forces will develop in stages concurrently, on the field of class struggle, in factories, enterprises and neighborhoods, out of the practical needs of the workers. Step by step, building on the successes and learning from the failures, the leadership of people’s war will be refined until victory.

LETS UNITE AND ORGANIZE AGAINST THE CAPITALIST STATE !

LETS US FIGHT AGAINST ROTTEN REFORMIST, REACTIONARY AND FASCIST SOLUTIONS !

DOWN WITH RECONCILIATION AND CLASS COLLABORATION ! '

LONG LIVE THE STRUGGLE OF THE PROLETARIAT AND POPULAR MASSES !