Indian Government Holds World in Contempt for Christmas :The Nagpur bench of the Bombay High Court has ordered proceedings for criminal contempt to be initiated against author Arundhati Roy 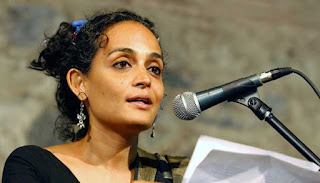 The Nagpur bench of the Bombay High Court has ordered proceedings for criminal contempt to be initiated against author Arundhati Roy for her article titled "Professor, POW" on Saibaba's arrest that was published in Outlook magazine on May 18, 2015.

Observing that Roy made scandalous observations against the central, state governments and police in her article, the court issued notice to her for contempt of court, returnable on January 25, 2016.

"Scandalous and scurrilous allegations are made by author Arundhati Roy in the said article against the judiciary," the court said.

It said she "indirectly questioned the sanctity of the order" made by Justice S.B. Shukre for rejecting the bail application filed by Saibaba.

It said that by making such allegations and remarks about the bail rejection order, Roy has interfered in the administration of justice.

Democracy and Class Struggle says the world has a voice and is time for it to be heard as the Indian Government proceeds to hold the world in contempt.