The Left in Turkey by Steve Kaczynski 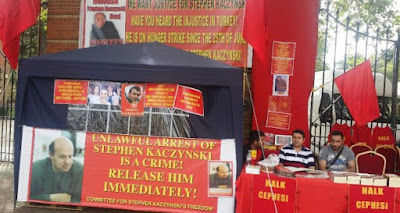 Democracy and Class Struggle asked Steve Kaczynski recently released from a Turkish prison to give an overview of the Left in Turkey to help clarify the situation for us and other comrades - here is his reply.


Although there was some interest in socialism in the last decades of the Ottoman Empire, the story of the left in Turkey really starts with the founding of the TKP (Communist Party of Turkey) in 1920.

Symptomatic of the fate of Communists and socialists in the decades to come, its leader, Mustafa Suphi, and a number of his comrades were murdered within a few months of the party's foundation.

The TKP was in fact to be illegal for most of its life, and frequently persecuted under the Republic, though Kemal Ataturk allegedly toyed with the idea of creating a fake "Communist Party" as a kind of loyal opposition.

The TKP did have an impact on Turkey's intellectual life, with Turkey's most prominent 20th century poet, Nazim Hikmet (1902-1963) as one of its leaders.

Hikmet also spent much of his life in jail, again a token of the party's illegal status.

A military coup in 1960 removed the right-wing and pro-NATO government of Adnan Menderes, and although Turkey did not leave NATO, the political left achieved some space to operate during the 1960s.

A legal party, TIP (Workers' Party of Turkey) was formed. It tended to be pro-USSR although some internal tensions on this score plagued the party, especially when one of its leaders, Mehmet Ali Aybar, denounced the 1968 Soviet intervention in Czechoslovakia and was forced to resign.

The TIP had won 15 seats in the 1965 election but lost most of them in 1969. The 1960s also saw the creation of militant trade unions and considerable student radicalism, much of it triggered by the Vietnam War. Some student radicals had been in the TIP but increasingly rejected it as too moderate and ineffective, especially after its 1969 setback. A youth organisation, Dev-Genc (Revolutionary Youth) arose at this time.

This was also a time when Islamists and fascists began attacking left-wing demonstrators, and the end of the 1960s and the beginning of the 1970s saw the formation of an armed left.

One group took the name THKO (People's Liberation Army of Turkey). Its leader, Deniz Gezmis, had received training in Palestinian guerrilla camps before returning to Turkey to begin underground struggle. THKO kidnapped some US servicemen but Gezmis and other leaders were arrested shortly afterwards.

A student radical, Mahir Cayan, formed the THKP-C (People's Liberation Party-Front of Turkey). This elaborated a theory that Turkey was in the grip of neo-colonial fascism under the control of imperialism. The THKP-C kidnapped and killed the Istanbul consul of Israel.

The Turkish army carried out a coup in March 1971 and there were mass arrests of socialists, many of whom were tortured. Cayan was captured but later managed to escape. Meanwhile, Gezmis and two of his comrades were sentenced to death.

After Cayan broke out, he put together what was left of the THKP-C organisation along with some individuals from the THKO who had escaped arrest. They decided to kidnap NATO technicians to try and prevent the executions.

A third armed current was Maoist, around the charismatic figure of another student radical, Ibrahim Kaypakkaya. He set up the TKP/ML (Communist Party of Turkey Marxist-Leninist) with an armed wing called TIKKO (Workers' and Peasants' Liberation Army of Turkey). This primarily operated in a part of Turkey's Kurdish east. Kaypakkaya was wounded and captured in 1973, and died under torture. 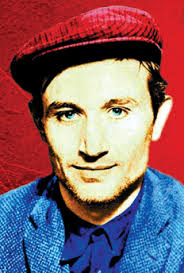 
After the military coup ended, political activity resumed as the 1970s proved to be a particular time of turmoil in Turkey's history. Left-wing radicals often claiming the mantle of THKO, THKP-C or TKP/ML clashed with the far right who were openly encouraged by the state. The 1977 Istanbul May Day rally was attacked by gunmen almost certainly acting with state connivance, resulting in over 30 deaths.

Sectarian tensions were also played on at this time, with Sunni fanatics claiming that Alevis (roughly speaking, the Shia Muslims of Turkey) were plotting with Communists to destroy mosques. An anti-Alevi pogrom in Maras, southern Turkey in December 1978 claimed more than a hundred lives.

The left often had effective control of city neighbourhoods at this time, but its strength was often dissipated in feuding among rival left groups. Clashes with fascist groups also claimed many lives.

Some senior state officials were also killed - for example, Nihat Erim, who had been prime minister in 1971-2 and had signed the death sentence of Gezmis, was killed by Devrimci Sol (Revolutionary Left), a successor group to the THKP-C.

With the US fearing that Turkey was threatening to slip out of control the way Iran had the previous year, Turkey's army generals staged another coup in September 1980. This was more thoroughgoing than the 1971 coup and for several years political life in Turkey was frozen. Hundreds of thousands of people, mostly from the left, were detained during this time, and torture was widespread. This was also a time when a large number of political exiles fled to Europe. The return to civilian rule was only superficial, with left-wing groups and trade union activists continuing to be under pressure from the state.

The PKK (Kurdistan Workers' Party), founded in 1978 by people who had in some cases been involved with Dev-Genc, began Kurdish nationalist guerrilla warfare against the Turkish state in 1984, with its leadership operating from Baathist Syria. State repression of both the PKK and the more militant wing of the Turkish left marked the 1980s and 1990s.

Some of the Turkish left who had once favoured armed struggle turned against it after the 1980 coup, affected by state repression and also the persistent search for a parliamentary road. The collapse of the socialist bloc also affected the left in Turkey to a considerable degree, though arguably less than in many other countries.

PKK leader Abdullah Ocalan was captured in 1999, which weakened but did not destroy Kurdish nationalism in Turkey. A prison crackdown in December 2000 resulted in the deaths of many left-wing militants, also triggering hunger strikes and death fasts that in some cases lasted for years.

The DHKP-C (Revolutionary People's Liberation Party-Front), a successor group to Devrimci Sol, was particularly targeted in the crackdown and many of its militants also died in death fasts. The "moderate Islamist" AKP government came to power in 2002 - it continued repression of the left and encouraged privatisation, though some cultural concessions were made to Turkey's Kurds.

Over time a sense of creeping Islamicisation fostered by the AKP government contributed to the Gezi events of 2013, when at times millions of people were protesting in the streets.

Turkey's left-wing groups, both legal and illegal, were heavily involved in the protests, although the mainstream "secular" CHP (Republican People's Party) was the single most significant force.

The HDP (Peoples' Democratic Party) founded in 2012 attracted support from some of the Turkish left, though its voting base and organisation is essentially Kurdish and it has been accused by the pro-AKP media and state forces of being a political wing of the PKK.

It took a somewhat cool attitude to the Gezi protests as it thought the AKP might be willing to resolve the Kurdish question and this might be endangered if the AKP lost power - a belief negated by the events of 2015.

The AKP failed to win an overall majority for the first time in the June 7 elections that year, then restarted conflict with the PKK to create a state of emergency situation for new elections on November 1 where it did regain its majority - demoralising some on the left who had over-estimated the significance of the June 7 election result.

Fighting and the chronic political tensions characteristic of Turkey continue, with the AKP ever more openly showing the same right-wing authoritarian face that has always confronted the left in Turkey.

The conflicts in neighbouring Syria and to a lesser extent Iraq are also destabilising the situation in Turkey.

This survey will conclude with an overview of left groups and parties in Turkey
.
EMEP - Party of Labour. Descended from the THKO, this party's name is inspired by that of the former ruling party in Albania - Hoxhaism was rather popular among the left in Turkey in the 1970s and 1980s. A legal party, it operates the satellite channel Hayat TV (Life TV) and has a daily newspaper Evrensel (Universal).

ODP - Freedom and Solidarity Party. Established 1996. Diverse ideological origins, including some Trotskyists. A leading figure, Ufuk Uras, was elected to parliament as an independent with Kurdish nationalist support in the 2007 election but later fell out with his party. A legal party, it publishes the daily Bir Gun (One Day).

HTKP and KP - Respectively, People's Communist Party of Turkey and Communist Party. They are separate organisations as a result of a split in 2014 in the TKP, itself originally a party of the 1990s called SIP (Socialist Power Party) not really related to the historic TKP - it took the name TKP in 2000. Both parties are legal.

ESP - Socialist Party of the Oppressed. This is particularly close to the Kurdish nationalist movement while espousing Marxist-Leninism. Legal, but considered by Turkish state forces and some media outlets to be linked to the MLKP (Marxist-Leninist Communist Party) which is banned. The MLKP was a fusion of ex-Maoist and Hoxhaite groups in the 1990s. ESP members and supporters were the principal targets of the Suruc massacre in July 2015.

DHKP-C - Revolutionary People's Liberation Party-Front. Marxist-Leninist, inspired by Che Guevara and the writings of Mahir Cayan. Pursues armed struggle, considering the Turkish state to be fascist. Anti-imperialist, it has attacked the US embassy in 2013 and the US Istanbul consulate in 2015, as well as carrying out a rocket attack on the main police headquarters in Ankara in 2013 in reprisal for police repression of the Gezi protests. Classified as a terrorist group by the USA and EU.

MKP - Maoist Communist Party - used to be called TKP(ML). Separate from the preceding organisation though it has a similar ideology. The two organisations have different international affiliations, however. Illegal.The MKP armed wing is HKO (People's Liberation Army).

Hardly an exhaustive list but these are the main groupings of the left in Turkey.

I have covered the Kurdish nationalist movement only in passing as this really requires a separate article.