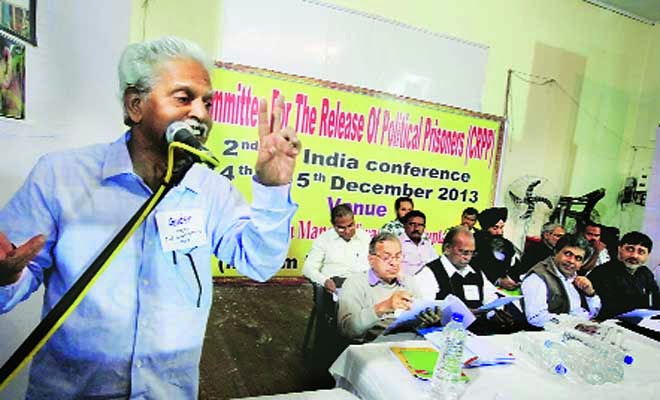 Democracy and Class Struggle salutes the All India Convention of the Committee for Release of Political Prisoners - your struggle and Convention gives meaning to the word Democracy in India.

True Indian patriots like the Committee for the Release of Political Prisoners in Kolkata represent all that is good and the best of India - we wish you success in your work and struggle.

Committee For The Release of Political Prisoners
West Bengal(Preparatory) Chapter


An All-India convention on 20 July at Seva Kendra, Kolkata on Kolkata High Court judgement on political prisoners, repeal of draconian laws, withdrawal of ban from all banned organizations and the unconditional release of political prisoners.


You are aware of the fact that state repression against dissident voices in large parts of India initiated by the central government and state governments in the name of the ‘Operation Green-hunt’ has reached its peak in the recent years. For the last several decades, the central and State governments in the name of ‘development’ have been selling out such immensely precious wealth of the country as water, land, forests and metal to the Indian big bourgeoisie and the foreign MNCs by displacing hundreds and thousands of the adivasis from their land, habitats, culture and social life spreading across large parts of the forest and mineral-rich provinces of the country.

And whenever people protested, opposed and took recourse to resistance for their self-defence and protection of dignity, police and paramilitary forces are being sent to crush them and drown their movement in pools of blood.

Throughout the country, most particularly in the central and eastern India, an undeclared war by the central as also state governments has been going on against the sons and daughters of the soil in the name of combating ‘terrorism’ and ‘Maoism’—the former name being borrowed by them from the American war-hawks.

The setting up of the National Investigation Agency(NIA), the attempts to set up the National Counter Terrorism Centre(NCTC) and many other repressive agencies of the State, the tapping of mobile phones and landlines of citizens, surveillance over e-mails, face-books etc, the introduction of biometric enlistment in the name of UID—all these and many more are manifestations of fascistic surveillance system that are total violations of the constitutional rights of the citizens. In Kashmir, the CRPF raises the poster in many places stating ‘Suspect All’.


In the same ugly spirit, the central and state governments have already set up a country-wide intelligence network that reminds one of a fascist raj. In their ventures, they are being provided logistic and military assistance as also political directives and advice both from the American and Israeli governments.


Draconian laws such as the AFSPA, UAPA and others have been clamped upon and thousands of people in states such as Chhattisgarh, Jharkhand, Odisha, Bihar, Andhra Pradesh, West Bengal, Kashmir, Manipur, Assam etc have been incarcerated for years together—acts that are totally fascistic and leave hardly any room for self-defence.


The government forces have been extending their periods of imprisonment under one pretext or another. Incidents of arrest, fake-encounter killings by security forces and other state agencies, rape and humiliations—have become almost daily features. In some states such as Assam, surrendered militants are being formed into armed gangs by the state to wipe out fighting people.

The right to freedom of speech, to write, to practise politics according to one’s own free will, to take part in movements—all these basic rights are being trampled underfoot by the powers-that-be. Today, any form of protests and voices that refuse to toe the path prescribed by the state are being branded as ‘terrorist, ‘Maoist’ and subjected to intimidation, arrest and torture that beggars description.


In the year 1992 in the previous left-front regime in West Bengal, the West Bengal Services Act was passed that accorded the status of political prisoner to those who were arrested on political charges. However, neither the previous nor the present Mamata Banerjee-led TMC-government gave political status to Maoist and other prisoners arrested under charges of sedition.


Some prisoners got the status from the court only after claiming it, while others did not get it at all. The plea given for refusing the status was that the CPI(Maoist) and its ‘frontal organizations’ were declared to be ‘banned’ by the state. In a recent landmark judgement in the Kolkata High Court Justice Ahluwalia Jr. rejected the objection of West Bengal government and gave the verdict that even people belonging to any banned organization such as the CPI(Maoist), should be given the status of political prisoner.

Along with this, it also proposed broad jail reforms that concerned the day-t-day lives of the prisoners as a whole. Recently, the West Bengal government has made an appeal against this judgement in the Supreme Court and that has been accepted for hearing. Needless to state, this appeal has the full backing of the central government.

In support of the decision of the High Court on the political prisoners and with the demands for the repeal of all draconian laws like the AFSPA, UAPA etc, withdrawal of ban on all banned organizations and the unconditional release of all political prisoners, the Committee for the Release of Political Prisoners, West Bengal Chapter(Preparatory) will hold an all-day Convention on 20 July 2013 from 10 AM at Seva Kendra, 52 B, Radhanath Choudhury Road, Kolkata-700015(At Palmer Bazar stop along Sealdah-Bengal Pottery-Tangra route) behind Loreto School.

On this occasion, we invite you/your organization to join this convention to express solidarity in support of the demands.


On behalf of the Organizing Committee for this Convention

10 AM-10.15 AM: Welcome Speech on behalf of the Organizing Committee
— Amit Bhattacharya, General Secretary, CRPP.

Third Session: 12.00 Noon-1.30 PM/ Repeal of Black Laws and Withdrawal of ban from all banned organizations