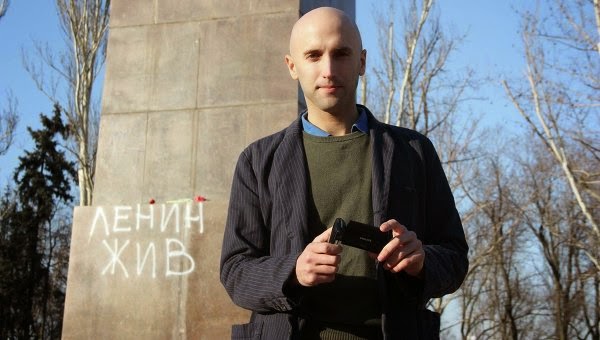 "I wasn't beaten, Vadim was severely beaten, but had a difficult day of detention by the Ukrainian army at Donetsk Airport". Graham Phillips


Graham Phillips  a freelance journalist covering the conflict in eastern Ukraine, has been deported to the UK, following his arrest at Donetsk airport on Tuesday night.

According to research from Brandwatch social networks monitor, Graham Phillips  has become the most popular author in Twitter reporting on the situation in Ukraine.

Phillips, who was previously detained by Ukrainian forces for two days in May, will not be allowed to re-enter the country for three years, Russian agency RIA and local media reported.

The SBU said that the official reason for the deportation was the threat Phillips presented to "state security, sovereignty and territorial integrity" of Ukraine.

Despite cautions from the RT channel for which he did freelance work that the area was too dangerous to work in, the 35-year-old journalist decided to film fire exchanges between government forces and militants just a few hundred meters away from the airport in Donetsk alongside a stringer for ANSA News, Vadim Aksyonov.

The airport building, occupied by anti-Kiev forces since the start of the conflict, has been a flashpoint as government forces have attempted to re-take control of the key eastern Ukrainian city.

Aksyonov, who was released on Thursday, said that pro-Kiev troops seized the two of them, placed bags on their heads, before bundling them into a car and dumping them in a prison cell.

The Ukrainian journalist said that both he and Phillips were beaten and tortured by security agents.