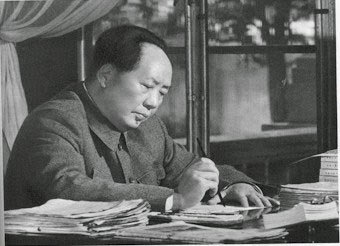 Question: What is your view on the Palestinian Arabs being deprived of their land

Mao: We support them (Applause and animation).
The Palestinian Arabs should go back to their homeland.

Right up to the present time we have had no diplomatic relations with the Israeli government.
The Arabs are the overwhelming majority [the questioner was an Arab].

All Arab peoples are opposed to their fellow-Arabs being driven out of Palestine.
If we don't stand on your side we will be making a mistake. That is why we are with you.
But it is not just a question of Israel but of who stands behind Israel.
Therefore it is a world question and particularly - one concerning the USA.
Posted by nickglais on 7/22/2014 04:22:00 AM

Hey comrades please indicate the date and place of this statement if possible. thanks