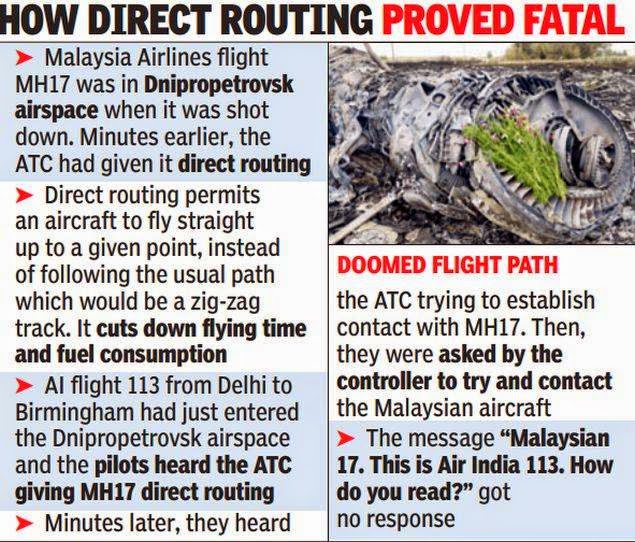 The Ministry of Civil Aviation claim there was no Air India flight near the ill-fated Malaysia Airlines Boeing 777 when it was shot down over Ukraine on Thursday appears misleading.

An Air India Dreamliner flight going from Delhi to Birmingham was in fact less than 25km away from the Malaysian aircraft, a distance covered by a Dreamliner or Boeing 777 in about 90 seconds, when the latter was hit.

Because of this closeness, the Dnipropetrovsk (local Ukrainian) air traffic controller asked the AI pilots to try and establish contact with pilots of the Malaysian aircraft who had stopped responding to its calls.

Minutes before the crash caused by a missile strike, the AI pilots had also heard the controller give the Malaysian aircraft MH17 what is called "a direct routing".

This permits an aircraft to fly straight, instead of tracking the regular route which is generally a zig-zag track that goes from one ground-based navigation aid or way point to another.

"Direct routing saves fuel and time and is preferred by pilots. In this case, it proved fatal," said an airline source.

"The AI Dreamliner was less than 25km away from the Malaysian aircraft when the latter was hit by a missile. When the pilots learnt the cause of the crash later, they were stunned.

It's like the person standing next to you has been hit by a sniper bullet," said the source.

As instructed by the controller, the AI pilots tried to contact the Boeing 777 after its transponder display went off the radar. The message they sent was: "Malaysian 17, this is Air India 113. How do you read?" There was, of course, no response.

Soon after the tragedy, the media picked up data from flightradar24, a live flight tracker website which showed the AI aircraft in the vicinity.

But the next day, on Friday, the civil aviation ministry issued a statement that "there was no Air India flight near the ill-fated Malaysian plane at the time of the incident".

The Ukrainian airspace is divided into five flight information regions: Kiev, Lviv, Dnipropetrovsk, Odessa and Simferopol. MH17 was in the Dnipropetrovsk airspace flying an east-bound track on 33,000feet and the AI Delhi-Birmingham flight was on a west-bound route and had entered Ukraine after crossing Russia when the AI pilots heard the Dnipropetrovsk controller give the Malaysian aircraft a direct routing.

In order to communicate, pilots and controllers tune in to one particular radio frequency, and all the conversation that takes place on that wavelength can be heard by all the aircraft who are tuned in to this frequency. So the pilots can hear each other as well as the instructions given by the controller to all the aircraft in a particular flight information region.

Other than this particular radio frequency on which pilots can communicate with controllers and other pilots, there is another radio set in the cockpit which is always tuned to 121.5MHz, known as the emergency frequency.

The pilots would try to contact the non-responding crew on this frequency too, but more importantly, it is on this frequency that they would get to hear the signature distress beep tone emitted by an emergency locator transmitter of an aircraft soon after it has crashed.