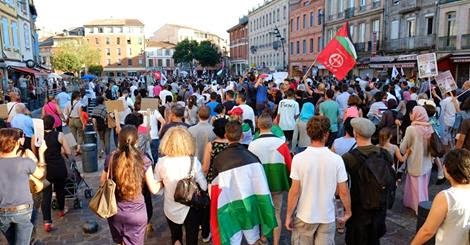 This evening, several thousands of people expressed their support for Palestinian people and its resistance movement in the streets of Toulouse (France). With slogans like “Long live the fight of the Palestinian people!”, “Israel killers, Holland accomplice!”, “Gaza, Gaza… Toulouse is with you!”, the popular demonstration walked through the city with calm and determination.
We have launched fundraising for the “Union of Health Work Committees” association that manages a hospital in the North of Gaza. We have raised 674.20 Euros. Thank you for your generosity, the fundraising goes on: HERE
Our group Coup pour Coup 31 (Blow For Blow 31), that initiated the demonstration, released this statement that has been read at the beginning and at the end of the demonstration.
We are once again in the streets tonight to show our solidarity towards the Palestinian people and our support to its resistance movement against Israel’s attacks and Zionism. During the Zionist attacks of the past days, more than 200 people have been killed and several thousands have been injured. Western media present the Israeli government and the Palestinian resistance as equally responsible of the situation. That eludes that one of the most powerful armies in the world is attacking people who have no army, no tank and no fighter. It also eludes the 1948 Nakba and the exodus of more than 800.000 Palestinian from their homeland. Futhermore, it eludes the racist policy of apartheid that Israel applies since its creation.
Let’s be clear. What happens in Palestine is not nor a war of religion nor a conflict between the Jews and the Arabs. What happens in Palestine is land appropriation and ethnic cleansing since more than 60 years. This project is based on a racist and colonial ideology: Zionism.
We condemn all forms of amalgams between Anti-Zionism and anti-Semitism. We also affirm that racism, in particular Anti-Semitism, is the worst enemy of the Palestinian cause. Palestine and the Palestinian people do not need false friends who use Anti-Zionism to spread their heinous speech.
Our support for the legitimate right of the Palestinian people to self-determination is based on our anti-colonialist and anti-racist commitments! And we firmly affirm that Israel as a colonial and racist state is illegitimate.
We support the Palestinian resistance, in particular one of its components which is the Popular Front for the Liberation of Palestine (PFLP). Besides its fight, in particular through armed struggle, for the national liberation of Palestine, this party fights for the social liberation of Palestinian.
Our thoughts are with PFLP general secretary, Ahmad Saadat, locked up in Zionist prisons since 2006, and with George Abdallah, former member of PFLP, lifelong activist for the Palestinian cause, imprisoned in France since 1984.
The anti-imperialist group Coup pour Coup 31 (Blow For Blow 31) has always sided with Peoples oppressed by capitalism. This is why we support the fight of the Palestinian people, of the Kurdish people for its self-determination, the fight of the Tunisian people, the Syrian people, the Filipino people… and that is why we fight against all the attacks of the imperialist powers that aim to subject the people as in Mali, Central African Republic, Afghanistan…
We call for amplification of the anti-imperialist fight and to support our coming initiatives, like the broad campaign for the liberation of George Abdallah that we will organize in October. We also call for a concrete solidarity towards Gaza by donations to the “Union of Health Work Committees” association which manages a hospital in Gaza.
LONG LIVE THE PEOPLE'S STRUGGLE AGAINST IMPERIALISM!
PALESTINE WILL LIVE, PALESTINE WILL OVERCOME!


Red Salute from Democracy And Class Struggle to comrades of Coup pour Coup in Toulouse.