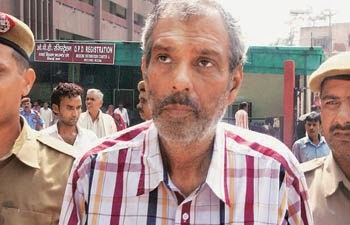 GIVE KOBAD GHANDY ALL FACILITES DUE TO A SENIOR CITIZEN!

IN SOLIDARITY WITH ANUP ROY LODGED IN THE PRESIDENCY JAIL IN CALCUTTA WHO IS ON FAST UNTO DEATH DEMANDING POLITICAL PRISONER STATUS!

As an under-trial political prisoner, Kobad Ghandy was initially lodged in the High Risk Ward (a jail within a jail) of Jail no 3 of the Central Jail, Tihar in New Delhi.

For Kobad Ghandy who is a heart patient, with acute Irritable Bowel Syndrome (IBS), cervical and lower lumbar spondilytis and a protracted case of prostrate problem for which he is undergoing treatment on an irregular basis, life in the High Risk Ward itself is a matter of risk for his own existence.

For someone who is in his late 60s Kobad Ghandy had to literally fight for every little facility keeping in mind his age as well as the fragile constitution that he has.

Representations after representations were send to the authorities—the jail superintendent as well as the DG prisons and to the judge who visits the prisons—for each and every small but very vital need of the prisoner that would make life slightly better in an otherwise hostile and alienating atmosphere of a jail within a jail.

Till the secret execution of Mohd. Afzal Guru, in Jail 3, at the High Risk Ward, Kobad Ghandy could stay in that jail without facing the constant threat of being shifted. During that period he could manage a chair and a table to sit and write, a bed block and also access to books and writing pad, all after careful scrutiny by the jail authorities.

The jail authorities willy nilly had agreed to let him access the supply of health supplements that was provided by his sister. With Afzal’s execution everyone was shifted from the Jail 3 High Risk Ward to other prisons.

Kobad Ghandy after lot of resistance was also made to shift to Jail 1, Ward 6. He was made to carry all his belongings with little help from the authorities. Given a stiff back and fragile health it was a harrowing experience for him.

Around that time when the CRPP met him he had made it very clear that another transfer would ruin his well being completely as it took him several weeks to recover from the toll of the shifting process.

He has also been reporting about the insensitivity of the jail authorities as it was difficult for him to carry water in a bucket from far away (more than 100 m) for his daily chores and painful experience of leaning and washing clothes.

Normally for other senior citizens and ailing inmates helpers (sevadaars) are provided. But the jail authorities have refused Kobad Ghandy any such provisions. It is in the same jail that another political prisoner Jagtar Singh Hawara is completely bed ridden after severe back problem which despite repeated applications the authorities have turned a deaf ear.

He then had demanded that he be given the same facilities in the jail where he is lodged. Only a few months before had he managed to get a bed block in Jail 1. And now the authorities have decided that he be shifted to Jail 2.

In protest, Kobad Ghandy has resorted to hunger strike. His family (sister) received information about the hunger strike and alerted the CRPP.

Further it was told later that Kobad Ghandy was forcibly taken away in the evening of 16 July 2014 on a stretcher to Jail No.2 when he was on hunger strike.

We don’t know if the authorities would extend the same facilities in the new jail as he will have to start from scratch writing applications for everything that he received in the previous jail. This normally takes at least a couple of months if the authorities are sensitive enough to grant him the facilities.

Otherwise you are left to tend with your tenacity to deal with sadistic and corrupt prison officials. It would be important to note that Kobad Ghandy is the only senior citizen in the High Risk Ward of Tihar Jail.

To treat a senior citizen who is an under trial like this inside the prison is inhuman.

We demand that the harassment meted out to Kobad Ghandy by shifting him periodically from one jail to the other be stopped forthwith. We reiterate that he be given all the facilities that are due to a senior citizen inside the prison. The discrimination meted out to him is inhuman and unlawful!

The Supreme Court while admitting the petition has refused to issue a stay order to the HC judgement.

Anup Roy’s struggle for political prisoner status brings home once again the important issue in the subcontinent, of the Indian State’s diffidence to recognize the category of Political Prisoners which is internationally accepted in many democratic countries as enshrined in the International Covenant on Civil and Political Rights of the UN (ICCPR).

The real challenge before India which claims to be the largest democracy in the world is whether it has the political will to recognize this important issue which reverberates from the various prisons in the subcontinent where hundreds of thousands of political prisoners are raising their demand from within the four walls of the dungeons braving all kinds of mistreatment and isolation.

We fear that Anup Roy’s health is in a critical condition as he has entered the sixth day of his fast unto death. We demand that Anup Roy be granted the political prisoner status immediately without any further act that smacks of vindictiveness!