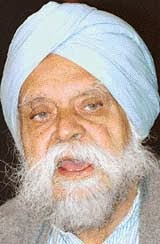 Today on September 27th we commemorate the 2nd death anniversary of Gursharan Singh. No comrade has ever made a greater contribution to the development of Punjabi revolutionary theatre as Comrade Gursharan Singh.

He built one of the strongest  street theatre groups in the history of post-1947 India.

No dramatist in Punjab could touch the haert of the broad amsses as this valiant Comrade.

His plays literally lit a red flame in the hearts of the masses be it in the factories or the villages.His plays could make the masses aware of social,economic and political issues and could relate them to the problemsthey faced day-to-day  -be it price-rise,unemployment,hosing,and other burning issues.

They transpired deep feelings like a spark turning into a Priarie fire.Above all Gursharan Singh was able to develop an original form of theatre .Without formally upholding Marxism-Leninism-Maoism his plays reverberated the spirit of the ideology morally upholding anti-feudal and anti imperialist struggles.

His plays brilliantly portrayed the social reality  portrayed the tyranny of landlordism,mone-lenders, opression on women,price,rise,unemployment.,casteism,communalism,elections etc.

Throughout his life he upheld the politics of Marxism-Leninism-Mao Zedong thought and the spirit of the Naxalbari uprising.

The author cannot forget how he inspired the 1st function of the All India league of Revolutionary culture  in the 1980's where he spoke about the great role of Comrade Mao in liberating women and the need for revolutionary slogans in the cultural movement.

"Comrade Gursharan was inpsired by the legacy of the Ghadar movement and the revolutionary work of Shaheed Bhagat Singh and his comrades. Born in Punjab in 1929, he did his masters degree in Chemistry and began work as a cement technician with the Punjab government. During the construction of the Bhakra Nangal Dam in the fifties, his conscience rebelled against the anti  worker anti peasant attitude of the government. He wrote a live drama upon the plight of the workers of the project. He decided to devote his life to the cause of the workers and peasants, and wrote more than 175 dramas and hundreds of songs.

His dramas were staged in most of the villages of Punjab. His work inspired thousands of peasants and revolutionary intelligentsia to take up the cause of the revolution. His dramas became popular all over the country and whereever abroad Indians resided.He experimented with new forms and contents, always linking his work with the toiling masses.

His famous song —Eh Lal  Farera  Teri Kasam, Is Khoon Ka Badla Hum Lenge —  has inspired countless people to take up the cause of the revolution."

The author cannot forget the role of Gursharan Singh on the cultural front in the 1970's during the student and youth upheaval,during the Khalistani movement from 1982-1992 and in the last 2 decades with the great peasant movements erupting.His street plays were performed at gatherings paying homage to martyrs and to conferences of revolutionary mass organizations.

They ressurected a burning flame in the hearts of the masses in the meetings held to remember the masses of the Naxalbari Struggle and against the Khalistani movement.Gursharan Singh vehemently supported the movement against state and Khalistani terrorism in the 1980's  and early 1990's and even formed the Revolutionary Unity Centre -a conglomeration of  naxalite groups opposing Khalistani and state terrorism.

A famous 9 day rally was held a covering various parts of Punjab in March 1987.Secular politics was projected combating the Hindu and Sikh communal forces.His group also played an important role in the function sheld in memory of the martys of Sewawala in 1991.Later in November 1994 in Rajjeana and the innaugural conference of the Lok Morcha Punjab Gursharan Singh's theatre group performed.

He also played an important role in the Committee for the protection of political priosners of which he was the president.He inspired the formation of the Democratic Front against Operation Green Hunt in recent years in Punjab which exposed  the naked character of state repression.

Although he did not support any political revolutionary group he consistently combated revisionist tendencies and stood by the mass line.He openly was critical of the C.P.I and C.P.M who never opposed state terrorism. Morally he upheld the struggle of the C.P.I.(Maoist) nationally.

Today a programme is being held in Barnala in Punjab  by the Punjab Loksabhyacharak Manch- a cultural organization .Last year a huge memorial function was staged in Kussa .Over 10,000 people attended the gathering which was one of Punjab's most memorable gatherings ever.


On this day let us dip our blood in memory of this revolutionary hero who made an immortal contribution.
Posted by nickglais on 9/27/2013 02:19:00 PM