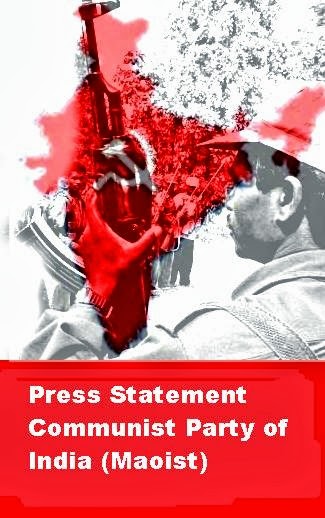 On September 14, 2013 the SOG of Odisha conducted a joint operation with the District Voluntary Force and the police in Silakota forests in Podiya block of Malkangiri district in Odisha and brutally massacred 14 Maoists including a woman comrade. The police seized their weapons too. Our CC, CPI (Maoist) is calling upon the people of our country to observe Bharat Bandh on October 5 to protest this brutality perpetrated by the neo-fascist Naveen Patnaik government in collusion with the central government and under the guidance of the imperialists, particularly the US imperialists.

Naveen Patnaik has been shamelessly playing the ultimate comprador since he came to power by signing countless MoUs with the MNCs to hand over for peanuts the natural riches and resources of Odisha. The people of Odisha, particularly the Adivasis and the Dalit peasantry are engaged in a life and death struggle against the central and state governments and their mining mafia which are hell bent on displacing them and impoverishing them to please the corporate houses by implementing these MoUs.
On the other hand they are waging a bitter struggle against the big land lords, usurers and liquor mafia that are sucking their blood like leeches.

The militant, long drawn and uncompromising struggles of the brave people of Odisha against POSCO and in Kashipur, Niyamagiri and Narayanapatna have not only inspired the fighting people of our country but also every activist fighting against the ill-effects of neo-liberal policies all over the world. Naveen Patnaik government born with deaf ears due to its comprador character has ignored the genuine demands of the people and instead resorted to severe repression with the complete support and aid including 27 Battalions of paramilitary forces including COBRA Bns on all the people’s movements ongoing in Odisha.

Massacres of people and activists including Maoists have become a common feature of this repression. Arrests, false cases, harsh punishments, inhuman incarcerations, beatings, atrocities, rapes, burning peoples homes and property – what not, the neo- fascists did not leave any stone of cruelty unturned to suppress the genuine aspirations of the people. Our party has been working since decades in Odisha and organizing the oppressed masses, particularly the Adivasis against the exploitation, oppression and suppression they are suffering in the hands of the ruling classes. It has either been in the forefront or has extended its full support to all the people’s movements against liberalization, privatization and globalization not only in Odisha but in majority of the states in our country.

So the Indian ruling classes under the guidance and goading of the imperialists launched the multi-pronged country wide offensive Operation Green Hunt – War on People since mid-2009 to wipe out our movement and suppress the genuine struggles of the people. Repression on oppressed masses is the hall mark of any exploiting state and OGH denotes a crucial node in this as it has surpassed all the previous offensives both in its scale and brutality. Though OGH is supposed to wipe out the Maoist movement it is in fact aimed to suppress every genuine democratic demand of the people, particularly for Jal, Jungle and Zameen. That is why the Maoists, democratic organizations and individuals and the people are at the receiving end of this offensive.

The Nazi Hitler, Fascist Mussolini or their current descendants like Bush, Obama, Hollande, Cameroon, or their desi avatars of Sonia, Manmohan, Rahul Gandhi, Chidambaram, Jairam Ramesh, Pranab Mukherji, or their satraps in the states like Raman Singh, Naveen Patnaik, Kirankumarreddy, Mamta Banerji, Piruthvi Raj Chavhan etc all have one thing in common. They all think they can play with people’s lives as and how they want. What they unfailingly don’t realize is that they are amassing the fury of the people and that they are bound to be buried underneath its torrent. The killings of people in Kashipur, Niyamagiri, Narayanapatna or in Malkangiri as on September 14 both in police firings and in fake encounters would never succeed in suppressing the people of Odisha.

If at all it would give them more reasons to hate this government and mobilize for its overthrow. The ignoramus DGP of Odisha, true to his nature of a boot-licking dog of the ruling classes has warned that any Maoists entering Odisha would face the fate of these 14 Maoists killed in Malkangiri. Would they never learn from history? No, unless it is their doomsday. It is the anti- people, pro-imperialist, pro-CBB, pro-land lord neo-liberal policies of the Indian ruling classes that is giving rise to Maoism in the vast rural tracts of our country in every state and there is no need for any Maoists to enter from ‘outside’ states or sky. Every comprador ruler who is implementing LPG policies is fated to face the resistance of the people and it is just one step forward in the right direction for them to turn into Maoists.

As all fascists he refuses to respect facts and that is why the beloved children of Odisha who were killed in Malkangiri are looking like ‘outsiders’ to this progeny of Goebbels. The people of Odisha would definitely avenge the killing of their beloved sons and daughter in Silakota forests by embracing Maoism in large numbers and by teaching the Naveen Patnaik gang a fitting lesson. Beloved People of India, Our beloved comrades who were killed in Malkangiri are mostly Adivasis who have taken upon themselves the duty of fighting the neo-liberal policies that are most detrimental not only to the Adivasis but all other exploited and oppressed masses in our country.

Protesting their encounter means lending your voice not only against the brutal offensive OGH but also saying a big NO to the pro-imperialist economic policies of the ruling classes. This year alone has seen massacres of people and Maoists in places like Lakadbandha in Jharkhand, Govindgaon, Bhatpar, Sindesur, Medri and Bhagawanpur in Gadchiroli of Maharashtra, in Edesmetta and Puvvarti in Chhattisgarh to name a few. In almost all these incidents both village women and women Maoists were also brutally murdered. All of them belong to the oppressed sections of our country and they have been fighting for the liberation of all oppressed sections in the society.

Protesting these massacres should be done by whoever opposes the lopsided development model of the ruling classes and we appeal to every citizen who aspires for democracy in our country to participate in the protest. We appeal to all the genuine democratic organizations, parties and individuals of our country to unequivocally condemn the September 14 massacre and organize and participate in protests against it.

We appeal to the people of our country to observe Bharat Bandh on October 5 and participate in the protests in huge numbers.