Nepal: Election Boycott Campaign and the Role of the Red Youths by Rishi Raj Baral 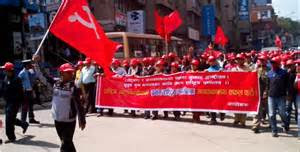