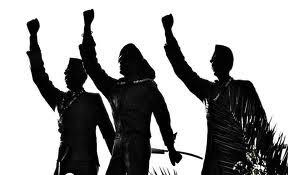 On September 12, in a joint operation in India, a 50 member squad of police personnel - comprising of members of National Investigation Agency (NIA), Delhi police, Special Cell of the Delhi Police and Maharashtra police - barged into the Delhi University staff quarter of Prof. G. N. Saibaba, a noted civil rights activist and professor of English at Ramlal Anand College, University of Delhi. The wheel-chair bound professor is a Joint Secretary of the Revolutionary Democratic Front (RDF) and the convener of several forums against ‘Operation Greenhunt’ and the persecution of millions of adivasis and tribal population of Central and Eastern India. He teaches English at Delhi University.

During the raid, his house was ransacked by the police on the false pretext of attempting to recover “stolen property”. Saibaba, his wife and daughter were subjected to violent threats and criminal intimidation by the raiding team. They were detained for nearly four hours and were denied access to their lawyer. Their mobile phones were confiscated and his right to contact the Delhi University Teachers Association (DUTA) was completely disregarded. Prof Saibaba’s laptop, hard disks that contain his PhD work and university teaching material, his and his family member’s mobile phones, many valuable books, copies of RDF publications and a DVD of a Hindi version of the Sanjay Kak film, Red Ant Dream, were taken away.

The Maharastra police team comprised of Suhas P Bawache who happens to be the Investigating officer of the case in which Hem Mishra, a Jawaharlal Nehru University (JNU) student has recently been shown as arrested in Maharashtra. The allegation of the police was that a micro-chip recovered from Hem Mishra was given to him by Saibaba. Saibaba has denied any knowledge of such micro-chip.

As reported by the Indian newspaper ‘The Hindu’, academics and activists including noted author Arundhati Roy, condemned this terrifying police raid.
Roy, while commenting on the incident, brought out a larger picture on how "this was a blatant attempt to criminalize even innocuous actions like internet chats that is part of a pattern of state action that was observed in the case of Binayak Sen as well". Drawing a parallel between the case of Parliament attack case convict Afzal Guru and Prof. Saibaba, Roy said in that case, too, it all started with a raid and recoveries made were later used to incriminate Guru.

The teachers present in the meet said it is a matter of grave concern that a DU employee and a wheelchair-bound person with 90% disability has been subject to this manner of intimidation, invasion of privacy, and violation of civil and human rights.
Karen Gabriel, a professor of English in St Stephen's College gave a broad account of the incident and the larger context in which it needs to be understood.  Manoranjan Mohanty, retired professor, noted that the search was a clear indication that "Operation Green Hunt was now taking place in the university and in urban areas as well."

Jamia Teachers’ Solidarity Association, Delhi and other members of the teaching community have condemned the police raid and stand in solidarity with G. N. Saibaba. They further added, “The violence inflicted upon Saibaba and his family shows yet again the high-handedness of the state and its police force and its power to treat human rights activists and other such citizens in such brazen manner.”

Nandita Narain president of the Delhi University Teachers' Association (DUTA) has condemned the police raid. Stating that the investigation was "baseless" and the charges "outrageous" and "despicable", Narain  said, "It is a matter of grave concern that an employee of the university and a wheelchair-bound person with 90 per cent disability has been subjected to this manner of intimidation, invasion of privacy, and violation of civil and human rights."  She also slammed the claim made by Gadchiroli police that "incriminating evidence" had been found against Saibaba.
Nandita wrote to the Indian Home Minister Sushil Kumar Shinde, claiming that the university community is deeply concerned that a pattern of police targeting, thrashing, molesting and otherwise intimidating and bullying university students and teachers, including persons with disabilities, has developed.

It is clearly evident from this development that by targeting activists and intellectuals, the State is trying to suppress voices of dissent that questioned its “so-called development policies” that are resulting in displacement of millions of indigenous people and farmers from their villages and farm lands for making way for setting up of corporate industries such as mining and steel / aluminium projects.

We call upon all democratic organisations, intellectuals and progressive minded people across the world to condemn Indian state’s heinous attack on the freedom of Prof Saibaba and all other political and civil liberties activists.

Indian Workers Association, Great Briton (iwagb38@gmail.com)
International Campaign for the Freedom of Political Prisoners, London
Posted by nickglais on 9/19/2013 03:18:00 AM