The Sellstrom Report : No Credibility on Syria by Yoichi Shimatsu 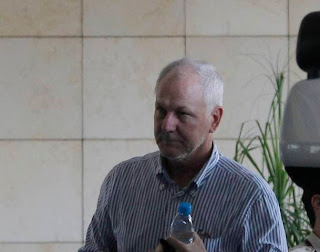 
"The term “relatively large scale” chemical-weapons attack used in the introduction to the UN report on Syria is hyperbole, since any major attack with sarin would have resulted in tens of thousands of fatalities, especially if dispersed by military rockets. The first videos from Ghouta showed residents pouring out of their homes onto the street, gasping for fresh air. If indeed highly efficient rockets had been used, every one of them would have been killed instantaneous. The gassing, therefore, must have been an accidental release indoors, probably from a hidden rebel arsenal.


Chemical residues from the alleged rockets would have been oxidized by the heat of impact and certainly no intact organophosphate traces would be detectable, since sarin is designed to decompose after 20 minutes. Rockets are designed to use a binary system by which two chemical precursors are mixed during mid-air dispersal. Thus, there is no need for stabilizers or dispersants, meaning an absence of any identifying chemicals. The UN inspectors arrived long after the expiration period for sample testing. There is a possiblity also that the site and rocket parts may have been tampered with falsified evidence by the rebels and their foreign military advisers.


The casualty figures are unverifiable, and certainly not any of the videos showed more than a dozen corpses at a time. The scenes of swaddled infants is typical of war propaganda, certainly not believable when only a few faces were visible. The sum effect of these images is closer to theater than credible reporting.

Sellstrom’s strategy is to point fingers of guilt at the Syrian regime, while avoiding all possibility of alternative and more probable scenarios"

This is just an extract read full report here by Yoichi Shimatsu:
http://www.globalresearch.ca/the-sellstrom-report-the-united-nations-syria-inspector-shills-for-nato-and-israel/5350287


Yoichi Shimatsu, a science journalist based in Hong Kong, led a team of investigative reporters for the Japan Times Weekly and served as consultant to Takarajima 30 magazine during the Tokyo subway gassing in 1995.