All the international support has been overwhelming - could you thank comrades through D&CS on my behalf. 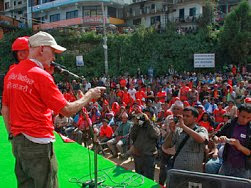 KATHMANDU, SEP 28 - The CPN-Maoist has objected to media reports concerning the police's search of an Irish national who was spotted giving anti-election speeches alongside the party's General Secretary Ram Bahadur Thapa a few days ago.

The party claims that the Irishman identified as Peter Tobin, 70, had not spoken anything objectionable as reported by the media.

The party said Tobin was putting his remarks as a "party's guest and a friend of the Nepali people".

“It's his natural right to express his solidarity with our campaign as a guest. It's not interference in Nepal's internal affairs,” reads the statement issued by Bishnu Hari Nepal, who is in charge of the party's pro-public department.