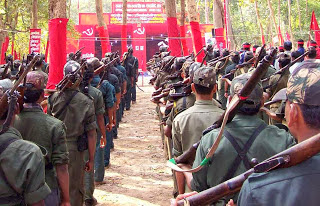 Democracy and Class Struggle publish this report for information - we cannot confirm accuracy of Report.

The People's Liberation Guerrilla Army (PLGA) of the CPI(Maoist) has moved on to being a conventional fighting force in at least two locations and has raised two battalions, sources in the state police and Ministry of Home Affairs say.

This is a major shift from the Maoists' guerrilla strategy: it has always maintained that the "principal and central task" of PLGA is to transform itself "into a fully developed People's Liberation Army."

The Maoists insist on establishment of Revolutionary Base Areas as a precondition for transformation of the PLGA: this move is probably an indication that the CPI-Maoist considers itself sufficiently entrenched in certain locations to stop calling them Guerrilla Areas.

This has resulted in the raising of battalions by the Naxal Central Military Commission, with about 250-300 fighters in each. Two such battalions have been reportedly raised, at least partially — in Jharkhand's Latehar district and along the Orissa — Chhattisgarh border. These are an upgrade from PLGA companies and platoons, which have 40-45 and 8-10 fighters each, respectively.

A conventional fighting unit would have about 1000 personnel in a battalion.

There have been rumours PLGA would soon be upgraded. "They have been calling themselves PLA in some areas since the end of 2012 or beginning of this year. We have encountered battalion formations since the Katia encounter," said an officer of the state police. "Maoists claim to have raised battalions in the Orissa-Chhattisgarh border, too," said an MHA official.

"Maoists seem to be implementing a new strategy, Vikendrikaran. This is decentralisation. In the face of a larger enemy, they split and melt away," said the officer.

K Vijay Kumar, a Security Advisor at MHA, said the upgrade to PLA is part of the flexibility conventional fighting forces cannot afford. "This is why we call it an asymmetric battle: such flexibility is adversely loaded against even the strongest government. They exist outside rule of law; they can do things we cannot, like change squad strengths at will. PLA is considered the ultimate and third level of their strategy. However, it is easy for them to go back to the second stage without problems," he said.
'
Source:
http://www.indianexpress.com/news/in-shift-from-guerrilla-strategy-maoists-raise-2-new-battalions/1176134/
Posted by nickglais on 9/30/2013 08:20:00 AM

Lal Salaam comrades of the Democracy and Class Struggle. Just a minute ago I was reading a similar article. Thanks for your international service in reading and posting such great articles so rapidly.
Your work matters as a true internationalist communist
Lal Salaaaam